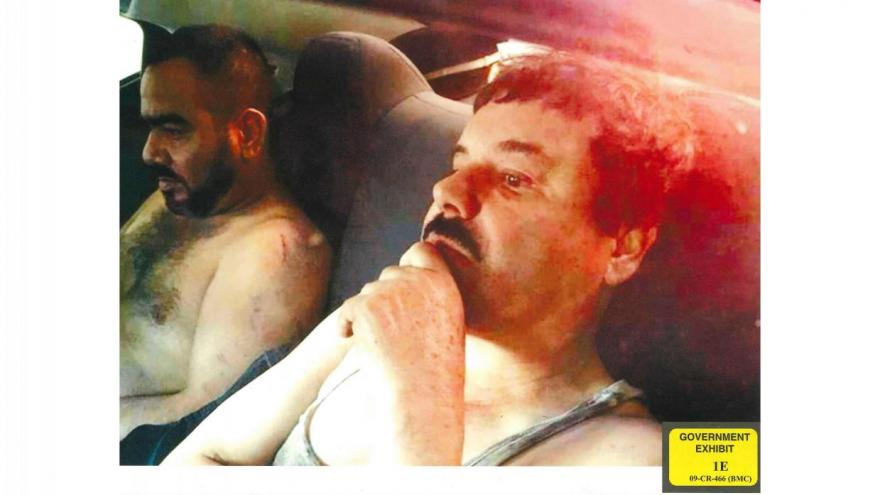 Joaquin "El Chapo" Guzman, wearing what appears to be a tank top, is pictured with an associate known as "Cholo Ivan."

(CNN) -- For years, members of the Sinaloa Cartel were able to talk to each other about executions, drug trafficking and corrupt cops who were on their side by using a custom, encrypted communications platform that they hoped would help them evade authorities.

But US law enforcement caught up to them, and flipped a former software expert who worked with the cartel. Officers said they gained access to hundreds of encrypted conversations between associates and the cartel's purported head, Joaquin "El Chapo" Guzman.

At Guzman's trial on Tuesday in federal court in Brooklyn, New York, authorities played several of the calls and shared information they gathered from the calls that provided them with some of the most direct links between Guzman and the allegations he ran a continuing criminal enterprise.

Guzman has pleaded not guilty to charges of international drug trafficking and conspiracy to murder rivals.

On the unencrypted calls, Guzman's voice, described by FBI Special Agent in Charge Steve Marston as "sing-songy" and "high-pitched," is heard directing associates how to handle cartel business.

"Once you have them tied up and such, we'll check it out to make sure we don't execute innocent people," Guzman is heard in a conversation from July 2011 telling an associate, nicknamed "Cholo Ivan," about what to do with people he has confrontations with.

The intercepted calls also picked up a conversation between Guzman and a federal police commander, identified in the call log as "El Yanqui."

In a July 2011 call between Guzman and an associate known as "Gato," Gato confirms that a Federal Ministerial Police commander is receiving monthly payments from the cartel, and then puts the commander himself on the phone to talk to Guzman.

Guzman tells the commander about Gato and says, "I ask that you look after him."

The commander replies, "And you can also count on me, really, whatever I can do. ..."

Guzman spoke freely about the cartel's dealings in the encrypted conversations, and each person within the cartel he spoke with had a unique "extension." Authorities seized a notebook with a handwritten list that linked each associate with their three-digit extension.

Sinaloa's secret communications platform was similar to an office phone system; anyone who was inside the system could dial other colleagues by dialing a three-digit "extension number." The only person who didn't have an extension was Guzman, whom associates referred to as "the boss." Guzman's calls would be logged in the system as "unknown."

To try to prove that some of the 800 calls authorities intercepted included Guzman, authorities leaned on two pieces of audio involving Guzman: a video published by Rolling Stone magazine featuring an interview with Guzman by Sean Penn, and a May 7, 2018, call Guzman made from prison in Manhattan.

Authorities were aware of the calls between Sinaloa associates for years, but because they were encrypted, even if authorities got hold of them, they couldn't unlock them and hear the calls.

Software expert Christian Rodriguez, who authorities say developed the secret communication platform for the cartel, eventually helped authorities unlock the encrypted messages. Rodriguez is a cooperating witness for the prosecution.

Marston testified Tuesday that Rodriguez was living in Colombia when authorities became aware that cartel members were using encrypted communications.

"We realized without insider access, we were not going to be able to gain access to the system," Marston said.

Rodriguez was lured to a Manhattan hotel in 2010, where a government informant posed as someone wanting to buy "equipment to evade law enforcement detection." Rodriguez didn't know he was being recorded. Authorities used that meeting to persuade Rodriguez to "proactively cooperate."

From 2011 to 2013, Marston said the FBI used Rodriguez's cooperation to access the calls that were logged on servers. Rodriguez still had access to the servers; he had been training cartel associates on how to maintain the systems, and would help with upgrading them and fixing technical problems remotely.

The four servers that helped Sinaloa associates communicate were in Canada, but Marston said Rodriguez helped authorities move the servers to the Netherlands, where the United States had a strong law enforcement relationship with local government.

Marston said the FBI decided against accessing the servers because it would appear suspicious to other cartel associates, who regularly accessed the servers and could see who else gained access. But once law enforcement had the encrypted communications, they still needed a special "key" from Rodriguez to be able to unlock the messages and hear the audio recordings.

'You taught us to be a wolf'

Of the 800 calls that were intercepted from the cartel's secret call system, between 100 and 200 involved Guzman's voice.

He is heard talking about police officers that the cartel had in its back pocket, telling associate Cholo Ivan, "When you talk, talk to them. You know that they are policemen. It's better not to smack them around."

Cholo Ivan later counters to Guzman saying, "You taught us to be a wolf."

Throughout the conversations, Guzman sounds chipper, answering several of the calls with an enthusiastic "Hola hola hola!"

Of the cartel's drug trafficking activity, Guzman is heard telling another associate, known as M10, "Don't shoot whoever sells cocaine" and "make sure you have no kilos left after."

In the intercepted conversations, Guzman refers to the cartel as "the company," and he is heard directing "company activities" and handling problems his associates bring up to him.

Correction: An earlier version of this article misspelled the first name of government witness Christian Rodriguez.