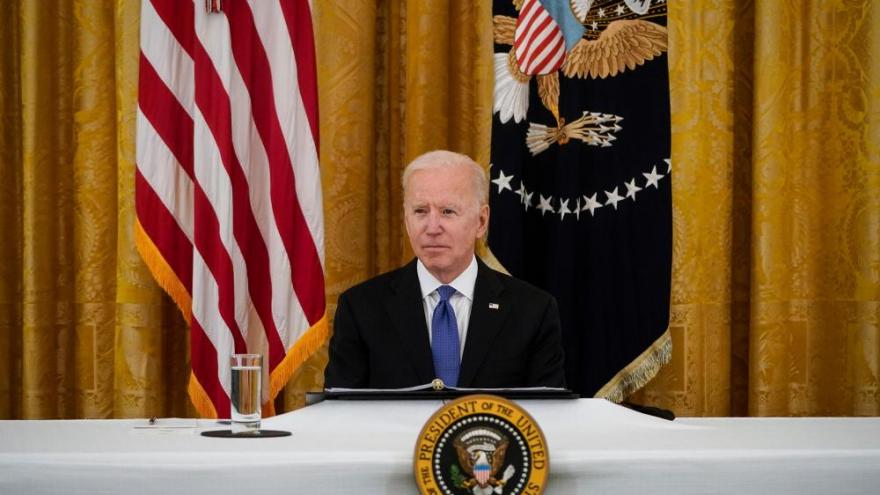 President Joe Biden announced on Thursday that he would be assigning five Cabinet secretaries to serve as his messengers in working with Congress and engaging with the public on the administration's infrastructure proposal. Biden is shown speaking briefly to the press at the start of a cabinet meeting in the East Room of the White House on April 1, 2021 in Washington, DC.

(CNN) -- President Joe Biden announced on Thursday that he would be assigning five Cabinet secretaries to serve as his messengers in working with Congress and engaging with the public on the administration's infrastructure proposal.

"While most of the Cabinet will have a role in helping shape and press the jobs plan, today I'm announcing that I'm asking five Cabinet members to take special responsibility to explain the plan to the American public," Biden announced during his first Cabinet meeting since being sworn in.

The work of the five Cabinet secretaries began before the public announcement on Thursday, according to a senior administration official. Tagged with the internal moniker the "Jobs Cabinet," the five officials began their work the day before Biden officially rolled out his roughly $2 trillion infrastructure and jobs proposal.

"Working with my team here at the White House, these Cabinet members will represent me in dealing with Congress, engage the public in selling the plan and help work out the details as we refine it and move forward," Biden said during his short remarks in the East Room.

"Whether it's broadband or different infrastructure components, the impact on businesses, these are the Cabinet members who will all play a role in this engagement," she told reporters.

The members of the "Jobs Cabinet" each called the Democratic chairs and top Republicans on the relevant committees of jurisdiction. Each Cabinet secretary had approximately 10 calls with the senior lawmakers, the official said.

On Wednesday, the day Biden unveiled his proposal in Pittsburgh, the group joined a White House briefing for House and Senate Democrats, with more than 150 lawmakers participating.

Their respective agency staffers then followed up with conversations with committee staffers.

Biden's decision to name key officials to not just sell the plan to the public but also serve as central players in the crafting of the legislative version of the proposal underscores both the stakes and the likely heavy lift ahead.

The proposal, called the American Jobs Plan, would heavily invest in rebuilding the country's infrastructure and shift to greener energy over the next eight years. The White House plans to pay for the proposal by raising corporate taxes and eliminating tax breaks for fossil fuels, which was one of Biden's core campaign promises. The White House says this tax hike would raise more than $2 trillion over the next 15 years.

During his infrastructure pitch in Pittsburgh, he stressed his support of labor unions and his hope the investment would lift the middle class.

Biden has made clear he will personally be involved in the legislative push and has already reached out to Senate Minority Leader Mitch McConnell, a Kentucky Republican, by phone and with plans to bring members of both parties to the White House in the weeks ahead.

"We feel there are a lot of areas of agreement, and the President will certainly be inviting Republicans and Democrats here to the Oval Office to have discussions and meetings about the path forward to hear their ideas," Psaki told reporters Thursday.

But while Biden's $1.9 trillion coronavirus relief package largely moved through Congress intact on the back of House and Senate Democratic unity, White House officials are aware of the scale of potential challenges ahead.

The group of Cabinet officials will work in concert with Biden's legislative affairs team, which successfully shepherded the relief plan through the House and Senate at the size and on the timeline Biden laid out from his first days in office.

But the areas of energy and tax policy alone are always thorny issues on Capitol Hill. The sweeping proposal creates natural divisions inside the Democratic caucus that simply didn't exist in Biden's first successful legislative push.

Republicans have made clear their opposition to Biden's proposal, with key players from McConnell on down rejecting it out of hand shortly after Biden's Pittsburgh remarks.

The administration, however, plans to continue to engage with both parties going forward, officials say, and the Cabinet secretaries will provide public and behind-the-scenes heft to the lengthy negotiations ahead.

Buttigieg has held calls with the presidents of the National League of Cities, National Association of Counties, the co-chairs of the National Governors Association's economic recovery task force, Kentucky Gov. Andy Beshear, a Democrat, and South Carolina Gov. Henry McMaster, a Republican, as well as a few individual mayors.

Fudge, a former House member well regarded in the Democratic caucus, is expected to play a key role with House members.

When Congress returns from its spring recess, the Cabinet officials are slated to hold a series of committee-specific meetings with key members.

The group has already been a heavy presence on the airwaves -- combining for 25 television and radio appearances ranging from local to national, in just the last 48 hours. That is expected to continue in the weeks ahead.

Ahead of Biden's Thursday Cabinet meeting, a White House official told CNN that Biden would keep a focus on the infrastructure plan -- his top legislative priority.

The five Cabinet members tasked with evangelizing the plan will likely face the challenging task of garnering support from Republicans from Congress.

Senate Minority Leader Mitch McConnell recently said that he'd "fight them every step of the way because I think this is the wrong prescription for America."

Responding to McConnell, Psaki pushed back during Thursday's briefing.

"Does he disagree that our nation's infrastructure is outdated and needs repaired? Does he disagree that one third of the country, who doesn't have broadband access, should have access to broadband?" she asked of McConnell. "There are a lot of areas where there is agreement with across the political spectrum, from investment and infrastructure, doing more to be competitive with China, and what we're really talking about here is how to pay for it."

"We feel there are a lot of areas of agreement, and the President will certainly be inviting Republicans and Democrats here to the Oval Office to have discussions and meetings about the path forward to hear their ideas," Psaki added.

White House chief of staff Ron Klain suggested in an interview with Politico on Thursday that like the American Rescue Plan, high public support will drive the passage of the infrastructure plan.

However, the American Rescue Plan, which provided trillions in coronavirus-related relief, passed without the support of a single Republican in Congress.

Pressed on whether he is open to using reconciliation to get the legislation through Congress, Klain reiterated a desire for bipartisanship, but placed more emphasis on getting it passed.

"What we want to do is get this passed," he said, citing a larger conversation with members as the "first goal."

He expressed hope for bipartisan process, but said the goal is to "deliver."