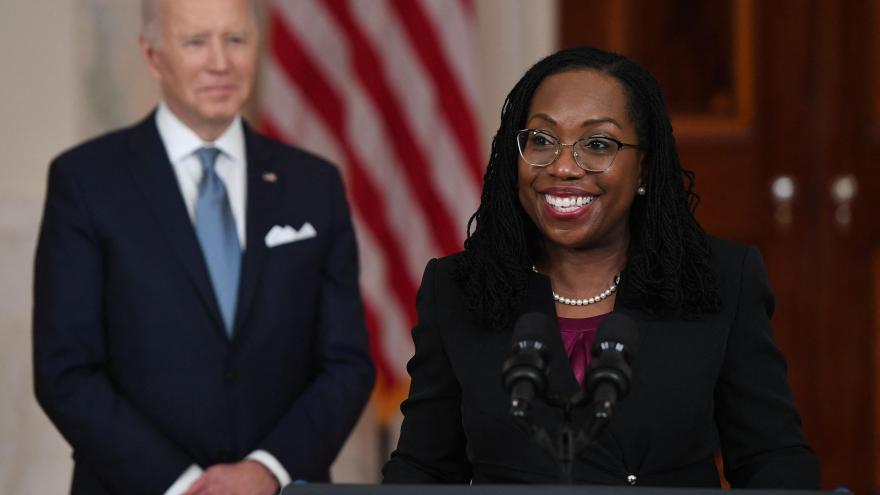 (CNN) -- President Joe Biden's choice of Ketanji Brown Jackson for the Supreme Court came about like so many of his big decisions: after a long process, with a lot of wavering and discussion, and ultimately landing right where he had been headed from the outset.

This is how Biden works. He starts with a strong gut feeling, but then he reads, and asks for more to read. He talks it through, seemingly endlessly, repeatedly picking up the phone to consult. He'll think about it some more. Then maybe just one more call.

Eventually he makes up his mind, guided by a sense of fate and poetry that longtime friends and advisers have witnessed time and time again.

"It's totally in line," said Democratic Sen. Gary Peters of Michigan, "with who he is."

Biden had a hunch about Jackson's moment of destiny early on, friends tell CNN.

He noted that she was a former clerk to Justice Stephen Breyer, whom she would replace on the court. The first time she was confirmed by the Senate had been to serve on a sentencing commission that Biden, then a senator from Delaware, had helped create. Her nomination to be the first Black woman on the court could come in Black History Month, a bow to freedom and liberty at home right when those values were under attack abroad.

Perhaps just as important was this powerful rhyme with Biden's own life story:

"There are those who told her she shouldn't set her sights too high," the President said Friday as he introduced Jackson to the world, "but she refused to accept limits others set for her."

Aware that Biden had noticed this fact of Jackson's biography, people who know him well say they weren't surprised by his final call. Just as in his other big political decisions -- to run in 2020, for example, and to pick Kamala Harris as his running mate -- a long deliberation with much back and forth landed Biden where he had wanted to go in the first place.

Any Supreme Court nomination is a major moment for a president, and this one even more so, due to the historic nature of Jackson as the pick. But this moment comes with extra layers of fate and legacy for Biden.

Almost exactly two years ago, Rep. Jim Clyburn, a South Carolina Democrat, offered his crucial endorsement at an existential moment for the survival of Biden's primary campaign, contingent on Biden's promising to nominate a Black woman -- and then, when Biden forgot to say so publicly during a debate in Charleston, South Carolina, Clyburn rushed backstage during a commercial break to remind him. Biden's subsequent win in the South Carolina primary became a watershed moment in radically reshaping the primary race and making him the nominee.

Actuarially, Biden knows this is likely to be his only Supreme Court nominee, even if he wins a second term. The next oldest justice after Breyer, who is 83, is Clarence Thomas, who is 73 and would clearly be inclined to hold on as long as he could to stop a Democratic president from diluting the court's conservative majority by replacing him.

From the beginning, Jackson was the leading contender -- though an administration official noted that the President had given "considerable weight" to fellow finalists US District Judge J. Michelle Childs and California Supreme Court Justice Leondra Kruger.

Biden didn't interview Jackson for the nomination until Feb. 14, in a meeting that the White House managed to keep entirely under the radar, along with Biden's conversations with the other two finalists on the same day. But knowing that Breyer was likely going to retire this spring -- despite top White House aides, on the President's orders, gingerly avoiding any direct pressure on him -- Biden had prepared over the last year by reading Jackson's opinions and other writings, along with those of other contenders.

Those mattered to Biden, a former Senate Judiciary Committee chairman who had presided over six confirmation hearings himself -- including Breyer's. But a senior administration official said Biden also was taken by Jackson's life story. She may be yet another Ivy League-educated nominee—her resume includes both being in a theater class as a Harvard undergrad doing "Waiting for Godot" with Matt Damon and later served on the Harvard Law Review with future Texas Sen. Ted Cruz. But she's the daughter of two public school teachers and administrators who started out as a federal public defender and rose to be a federal appellate judge.

A former Biden aide who was not involved in the selection process but knows the President's mentality well noted that Biden was briefly a public defender himself and likely connected to Jackson's choosing that job despite coming out of Harvard Law, where most of her classmates took high-paying jobs. "He believes fundamentally that people who should be the president and be on the Supreme Court should be people who at their core are public servants," the former aide said.

A new spot in the pipeline

Jackson's nomination comes with extra appeal for a President who is eager to keep up a record-making pace of judicial nominations and who believes that part of the mission of his presidency is trying to pull the country away from the partisan abyss that has enveloped Supreme Court confirmations, along with everything else. In October 2020, appealing to Senate Republicans not to rush for the sake of flipping the late Justice Ruth Bader Ginsburg's seat before that year's elections, Biden said, "Our country faces a choice -- a choice about whether we can come back from the brink."

White House Counsel Dana Remus first called Jackson six days after Biden's inauguration, to see if she'd be interested in replacing Merrick Garland on the powerful federal Court of Appeals for the DC Circuit. Garland's nomination as attorney general came with its own layers of poetry from his nomination to the Supreme Court by then-Presidernt Barack Obama in 2016, which Republicans blockaded. But another appeal for Ron Klain, the White House chief of staff, whose first job for Biden was as an aide on the Judiciary Committee, was that it would open up Garland's seat on a court that has become a pipeline for future Supreme Court nominees.

If Jackson is confirmed, now Biden will be able to tee up another potential future Supreme Court nominee -- and maybe another history-making one -- for a president in the years to come. (Childs has already been nominated for another spot on the DC circuit court.)

Clyburn had pushed hard for Childs, a fellow South Carolinian whom he knows personally and professionally, even managing to line up signals of support from home state GOP US Sens. Lindsey Graham and Tim Scott if Biden had picked her. But while Biden had agreed to promise Clyburn that he'd pick a Black woman, he didn't promise which Black woman, and as gracious and thankful as the President is for the congressman's endorsement, he and close aides from the campaign have chafed at the suggestion that Clyburn won the presidency for him.

"I'm Black and I'm a Southerner, and I'll do everything I can to promote Southerners and Black people who are deserving of attention for public office," Clyburn told reporters after Jackson's nomination was announced. "When you play the game, you may not always win. But if you don't play the game, you will never win."

Biden called Jackson on Thursday evening to extend the offer.

"How are you?" Biden asked on speakerphone when she picked up, sitting behind his desk in his private office.

"I am wonderful," she said.

"Well, you're going to be more wonderful -- I'd like you to go to the Supreme Court, how about that?" he said.

"You deserve it," he added. "You're incredibly well qualified, and I think the court should look like the country."

They spoke for a few minutes. She accepted the job, although with the events in Ukraine, they weren't quite sure when the President would be able to tell the world.

Enough time had gone by, though. Biden had made up his mind. Now he wanted to get moving to confirmation.