Inside a closed-door US Border Patrol facility in Texas 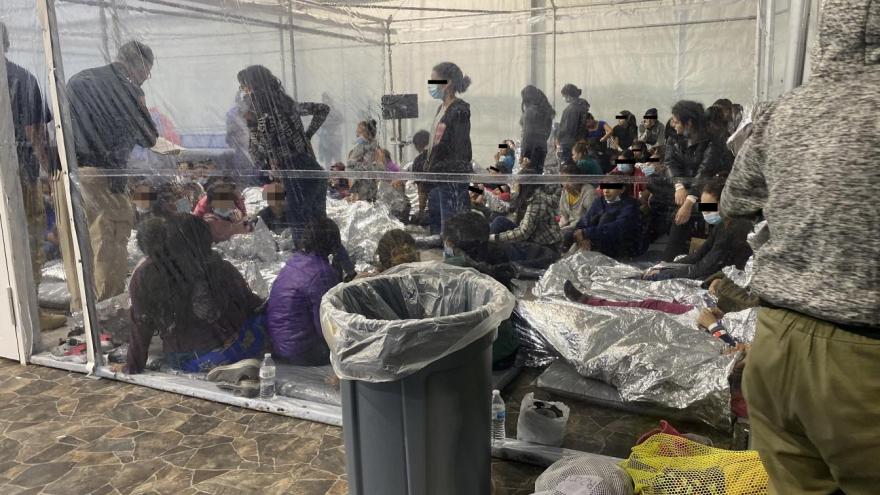 Photos released by Democratic Rep. Henry Cuellar's office show conditions inside a USCBP facility in Donna, Texas, over the weekend. CNN and Rep. Cuellar's office have obscured portions of the image to protect the identities of minors.

(CNN) -- As the number of unaccompanied migrant children crossing the US-Mexico border continues to rise, hundreds have been kept in US Border Patrol facilities not meant for minors.

The Biden administration has not allowed journalists to independently visit the facilities, but several lawmakers have visited sites. Democratic Rep. Henry Cuellar provided these photos revealing the conditions for dozens of children and adults in an overflow facility in Donna, Texas.

RELATED: Reporters call out Biden administration for lack of transparency at the US-Mexico border

As of Sunday, there were 822 children held in Border Patrol facilities, akin to jail-like conditions, for over 10 days, according to documents obtained by CNN. The number of kids held for a prolonged period of time has climbed almost daily as the administration races to find shelter to accommodate them and amid constraints related to the coronavirus pandemic.

RELATED: Why so many kids cross the border alone

Homeland Security Secretary Alejandro Mayorkas, when pressed by CNN's Dana Bash on "State of the Union" Sunday, would not provide a timeline on when children at the border will be housed in more humane conditions, only saying it would be "as soon as possible."

Mayorkas told Bash that the Biden administration is "working around the clock to move those children out of the Border Patrol facilities into the care and custody of the Department of Health and Human Services that shelters them."

"I have said repeatedly from the very outset that a Border Patrol station is no place for a child," the secretary said.

In early February, US Customs and Border Protection announced the opening of a soft-sided facility in Donna to process individuals. The facility is different from typical Border Patrol stations and provides areas for eating and sleeping, according to the agency.

The growing number of migrant arrivals, however, has overwhelmed the administration's resources, resulting in crowded conditions.

RELATED: How the border problem caught the Biden team off guard, and how they've scrambled to fix it

The average time in custody for unaccompanied children continues to hover around 130 hours, exceeding the 72-hour legal limit, though the number of children in Customs and Border Protection custody dropped slightly to just under 4,900, documents show.

White House press secretary Jen Psaki told reporters Monday that the photos "show what we've long been saying, which is that these Border Patrol facilities are not places made for children." Psaki added that the administration continues to focus on efforts to put in place solutions including expediting processing and opening additional facilities run by the Department of Health and Human Services.

"Our alternative is to send children back on this treacherous journey," she added.

This story has been updated with comments from the White House.