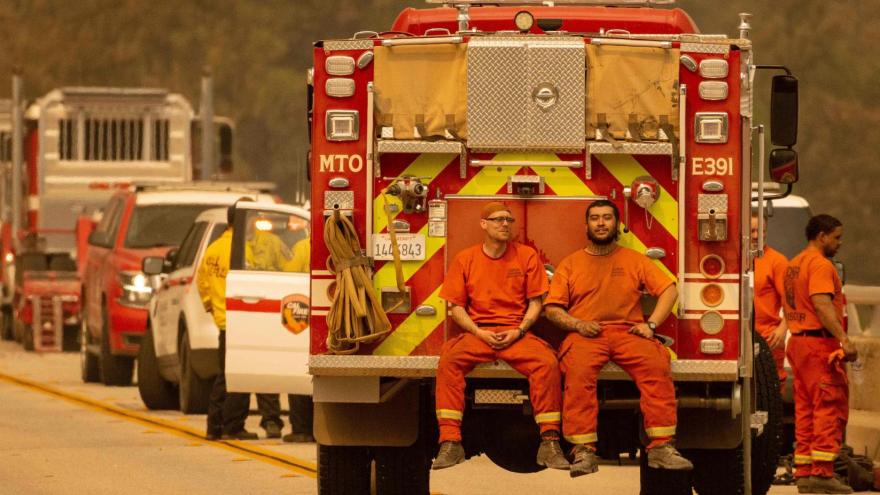 Inmate firefighters sit on the back of a fire truck on the Enterprise Bridge during the Bear fire, part of the North Lightning Complex fires, in unincorporated Butte County, in Oroville, California on September 9.

(CNN) -- California Gov. Gavin Newsom signed legislation Friday that allows inmate firefighters who are on the front lines to become professional firefighters after they are released from prison.

The law gives former inmates the chance to have their records expunged and have their parole waived because of their time as firefighters.

"Inmates who have stood on the frontlines, battling historic fires should not be denied the right to later become a professional firefighter," Newsom tweeted. According to CNN affiliate KABC, Newsom said the law will give thousands of inmate firefighters opportunity and hope. He called them "heroic."

Eloise Gomez Reyes, a Democrat who sponsored the legislation, said the measure is about second chances.

"To correct is to right a wrong; to rehabilitate is to restore," Gomez Reyes said. "Rehabilitation without strategies to ensure the formerly incarcerated have a career is a pathway to recidivism. We must get serious about providing pathways for those that show the determination to turn their lives around."

People who commit violent felonies or sexual crimes are not eligible to petition to have their records cleared.

For decades California has supplemented its firefighting efforts with minimum-security inmates. The California Department of Corrections and Rehabilitation (CDCR) operates 43 conservation camps, or fire camps, throughout the state. Hundreds of inmates have been used each year to battle recent fires.

The legislation that Newsom signed says three inmate firefighters have died since 2017.

The average compensation for an inmate firefighter is $3.63 per day, and they earn an additional $1.00 per day when deployed to an active fire, California Department of Forestry and Fire Protection spokeswoman Christine McMorrow said in August.

Despite their extensive training and heroic efforts in times of crisis, former inmates are often denied roles in fire departments because of their felony records.

Most fire departments require candidates to have an EMT license, which can be extremely difficult to acquire with a felony conviction.

The Conservation Camp Program supports state, local and federal government agencies as they respond to emergencies such as fires, floods and other natural or man-made disasters.

With 12 to 17 inmates in each crew, inmate firefighters work as "hand crews" who use hand tools like shovels, rakes and axes to construct the fire line.

This year there are significantly fewer inmate firefighting crews helping to battle California's devastating wildfires due to the state prison system's early release program, according to Cal Fire.

In July, the CDCR announced its decision to release as many as 17,600 inmates early to protect the prison population and staff from the coronavirus pandemic.