Inmates at one California jail tried to infect themselves with coronavirus, Los Angeles Sheriff says 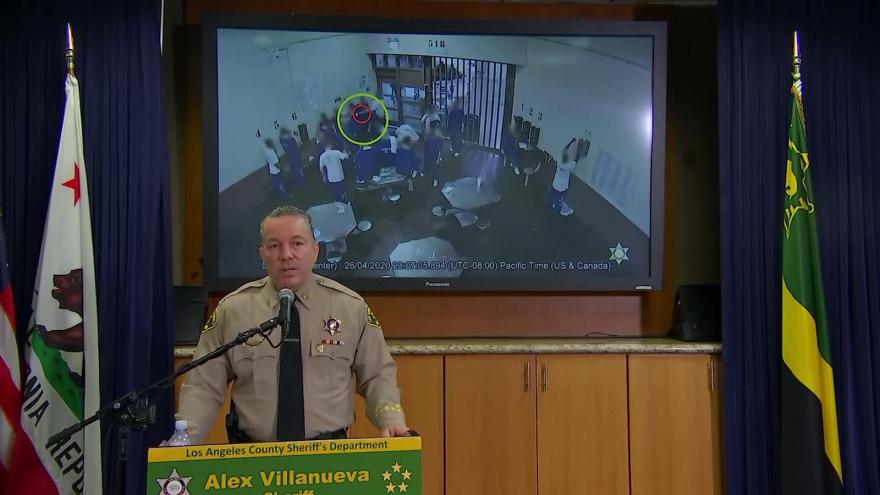 Inmates could be seen sharing a cup on a security video, the sheriff said.

(CNN) -- Inmates at a Los Angeles County correctional facility drank from the same cup with the purpose of infecting one another, resulting in 21 cases of coronavirus, Sheriff Alex Villanueva said.

The inmates at North County Correctional Facility in Castaic are seen on surveillance video crowding the hot water dispenser, sipping the water, and also "sniffing" out of a common mask, according to Villanueva.

"It is very disturbing to think that people would do this to themselves deliberately in an attempt to force our hand to release more people from custody," the sheriff said at a press conference on Monday.

The inmates were drinking hot water to try to raise their oral temperatures before a temperature check, he added.

Within a week of the surveillance video, 21 inmates tested positive. The sheriff estimated that the 21 people made up about 40% of the module's population at the time.

"Every inmate has access to their own cup of water which they jealously guard," the sheriff said. They use it to cook ramen noodles or make instant coffee, for example.

"It's not something they share person-to-person, and anyone who practices basic hygiene doesn't do that anyway," Villanueva said. "So, in this environment, and then considering the fact that the 21 tested positive out of that module, shows what their intention was."

The department is exploring criminal prosecution for those who intentionally spread the virus, he said.

"No one's gonna admit to" intentionally trying to infect themselves, the sheriff said. "I think their behavior is what convicts them."

The news comes almost two months after Los Angeles County released some inmates early and reduced the number of arrests in the county due to coronavirus concerns.

The mid-April spike in positive cases drew the attention of authorities. On May 3, the department started testing everyone -- but at the time of the video, only those exhibiting symptoms were tested.

A total of 357 inmates have tested positive for coronavirus since the start of the pandemic, according to the sheriff's department.