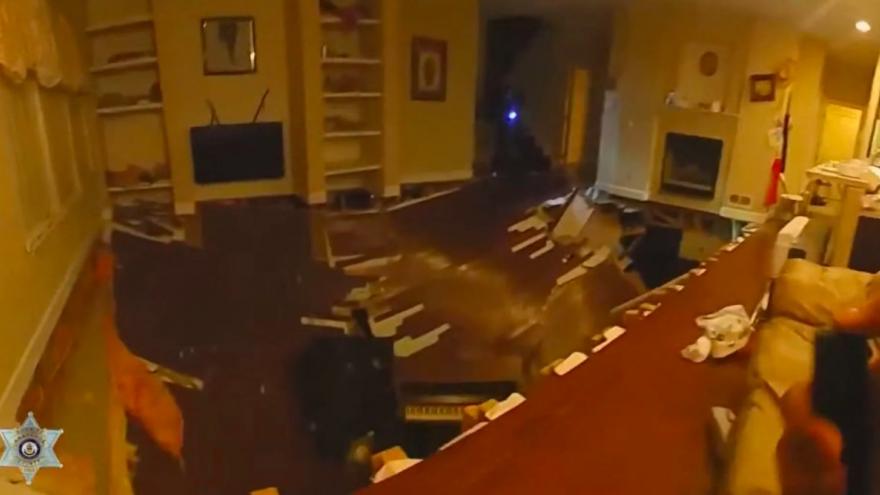 ARAPAHOE COUNTY, Colorado (KCNC) -- Some teens are still recovering after the floor caved in at a packed house party in Arapahoe County in February. A claim has been filed against the homeowner’s insurance on behalf of one guest left paying thousands for medical care.

Grayson West was severely injured when the floor caved. The 19-year-old was lucky he didn’t lose a leg.

“I wasn’t in too much pain at the time. My mind was running like ‘what I do now? How do I get out of here?’ recalled West. “It looked like my heel had poked out of my shoe. I was freaked out, but I kept calm. I knew I had to get out of the house.”

West says he managed to crawl out of a window to escape the smell of gas. He didn’t realize the extent of his injuries until he woke up in the hospital with his leg full of pins.

His tibia slid off his foot and his talus bone dislocated 180 degrees and fractured. Emergency surgery saved his leg.

“The doctor basically said it looked like it was thrown into a blender,” said West.

West hasn’t been able to put weight on that leg and he won’t for months. With rods and pins holding his ankle in place, he has been largely immobile ever since.

His insurance is with Kaiser. In the following weeks, he followed up with his doctor in-network about the future of his mobility.

“It was all doom and gloom. There was a bunch of talk about what happens if the bone dies, if it doesn’t get enough blood flow, if the prosthetic doesn’t get accepted. Amputation was an option. It’s scary to hear as a 19-year-old with a whole life in front of me,” said West.

West and his family sought a second opinion at UCHealth where they received a much better prognosis with additional surgery. UCHealth is out of his network and his insurance refused to pay for the procedure, but West still opted to have the surgery.

Now they’re left paying thousands for it. Kurt Zaner at Zaner Harden Law signed West on as a client.

“They’ll have defenses. The homeowner’s insurance could say, ‘Well, was it foreseeable that this could have happened?’ But if you see the videos of the party, and that many kids jumping around, at some point it becomes too much,” said Zaner.

Zaner says nothing can be done about the questionable structural integrity of the home.

“That’s the first thing that we thought. Should that floor collapse? But because the house is older than six years old, it’s too late to bring a claim,” explained Zaner. “You really only get two years to bring a construction defect case. They give you an extra four years for you to discover the defect.”

Zaner says he anticipates the homeowner’s insurance to deny the claim. If that happens, they’re more than ready to take them court and let a jury decide if they should pay Grayson’s recovery.

“I’m glad we all got out of there alive and it’s not worse than this. If I could go back, I probably would have said no to the party,” said West.