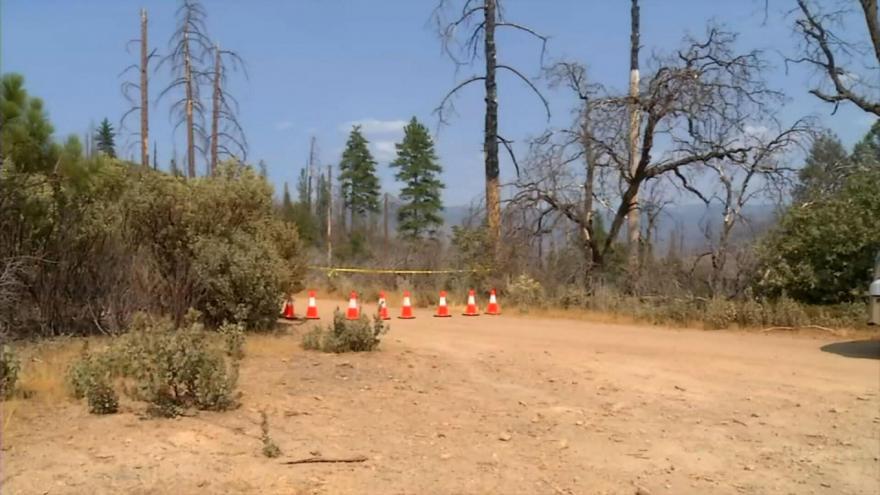 Authorities in Mariposa County, California, are trying to determine why a family of three and their dog died on a remote hiking trail in the Sierra National Forest near Yosemite National Park.

(CNN) -- The mystery surrounding the deaths of a couple, their baby daughter and the family dog found on a hiking trail near Yosemite National Park is deepening after autopsies yielded no immediate clues as to what caused their deaths.

The bodies of Jonathan Gerrish, Ellen Chung, their 1-year-old daughter, Miju, and the family dog, Oksi, were found by search and rescue workers Tuesday in a remote area of the Sierra National Forest near the south fork of the Merced River, according to the Mariposa County Sheriff's Office.

They had been reported missing on Monday night.

Investigators are still considering an array of possible causes, from toxic algae reported in the nearby Merced River, to noxious gases from abandoned mines near the trail, sheriff's spokesperson Kristie Mitchell told CNN.

Last month, the US Forest Service warned that toxic algae had been discovered in the Merced River and urged people not to swim, wade or allow their pets to drink the water.

First responders on Tuesday initially treated the area as a possible hazmat scene because of concerns over carbon monoxide from nearby mines.

Rattlesnake bites are still being considered, although it's likely there would have been evidence on the bodies, according to Mitchell.

The only explanations that have been ruled out are causes like gunshot wounds or blunt force trauma, Mitchell said, due to lack of any physical indications. There was neither a suicide note nor anything that would lead investigators to believe the deaths were intentional.

The Mariposa County Coroner is awaiting toxicology results as investigators continue to comb the scene for possible clues. Those results are expected to take at least two to three weeks.

"This is just a tragic, frustrating case for us," Mitchell said Thursday. "It will probably be a long, tedious investigation."

A necropsy is being conducted on Oksi, the family dog, Mitchell said, adding that there were no other animals found deceased in the immediate area.

They were amazing, friend says

Steve Jeffe met the couple in San Francisco years ago and they grew very close after each relocated to the Mariposa area.

Gerrish worked for Google and had recently started a job at Snapchat, according to Jeffe, who was alerted by friends that the family had not returned home from a day hike on Sunday.

The family's nanny found no one home when she arrived Monday morning, and after Gerrish failed to show for work, "alarm bells went off," Jeffe said.

"They were an amazingly loving and doting family," said Jeffe, describing the couple as beloved with a very large groups of friends.

"It's a bewildering event. There's something so disconcerting about what happened," said Jeffe. "Whether it was environmental or man made, it was obviously something they encountered," Jeffe added, speculating about what may have led to their deaths.

The family's bodies were found on the Savage-Lundy Trail, which is popular in the spring because of its colorful wildflower blooms. Mitchell said Wednesday it is very hot at this time of year and there is little shade.

She said the family was well prepared for a day hike.

There is no cell service in the area, so search and rescue crews had to rely on satellite phones for communication.

"This is never the outcome we want or the news we want to deliver, my heart breaks for their family. Our Sheriff's Chaplains and staff are working with their family and will continue to support them during this heartbreaking time," Sheriff Jeremy Briese said in a statement.