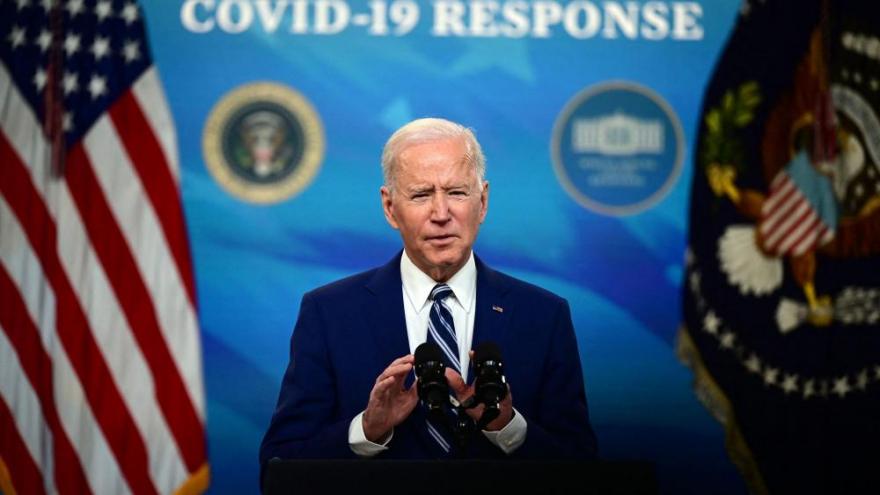 The package, which could cost between $3 and 4 trillion, includes two pieces: one piece investing in domestic manufacturing, research and development, the care-giving economy, climate infrastructure and roads, bridges and rail; the second aimed at childcare, paid family leave, health care and education infrastructure. If passed, the bill could amount to a transformation of the American economy amid continued recovery from the coronavirus pandemic, but there is still much to do to build support for the legislation.

Biden is set to unveil the first part of that proposal and how to pay for it on Wednesday in Pittsburgh, with the second part to follow in the coming weeks.

In a sign of how quickly the administration is moving on its next major legislative priority, the senior official told CNN the White House wants to see substantive progress on advancing the legislation by Memorial Day -- May 31 -- as they work with Congress, which gives them just two months.

While Democrats have been laying the groundwork on Capitol Hill in anticipation of a push toward infrastructure, there are still glaring differences within Congress about how to proceed, all of which could slow the White House's ambitious timeline.

Democrats are still having discussions about how they want to pay for the bill and how much of it they want to pay for. Leadership will also have to carefully thread the needle between pushing green energy initiatives in the bill, but not so aggressively that they lose Democratic Sen. Joe Manchin of West Virginia, a key moderate vote.

Some Democrats are also still committed to the idea of bringing Republicans on board, even as that is viewed as a long shot. And, unlike Biden's $1.9 trillion Covid-19 relief bill, Democrats have regional priorities when it comes to infrastructure that can make a bill like this far more complicated to wrangle votes for. Biden has said he would like bipartisan support for the package, but suggested his definition of that extends more broadly to getting support from conservative Americans.

The White House plans to engage with Republican lawmakers to find bipartisan consensus on the plan, and Biden hosted a bipartisan group in the Oval Office earlier this month. But Republicans have balked at enacting tax increases to pay for the measure and congressional Democrats are already laying the groundwork to advance the proposal through budget reconciliation. Some sources expect that process could extend pass the August congressional recess.

The first prong of the White House proposal will be financed in large part through business tax increases, including raising the corporate rate to 28% from its current level of 21%, and increases in the global minimum tax, the ending of federal subsidies for fossil fuel firms and a requirement that multinational corporations pay the US tax rate.

Internal debates on how much of the proposal to pay for have been ongoing for several weeks, with White House officials keenly aware of potential inflationary risks, officials said. White House press secretary Jen Psaki told reporters the proposal laid out on Wednesday would include mechanisms to finance the entirety of the package over time.

"The President has a plan to fix our infrastructure and a plan to pay for it," Psaki told reporters Monday, adding, "But we are also open to having a discussion, and we certainly expect to have a discussion with members of Congress moving forward."