Indigenous people are trekking across the US with a 25-foot totem pole. Here's why 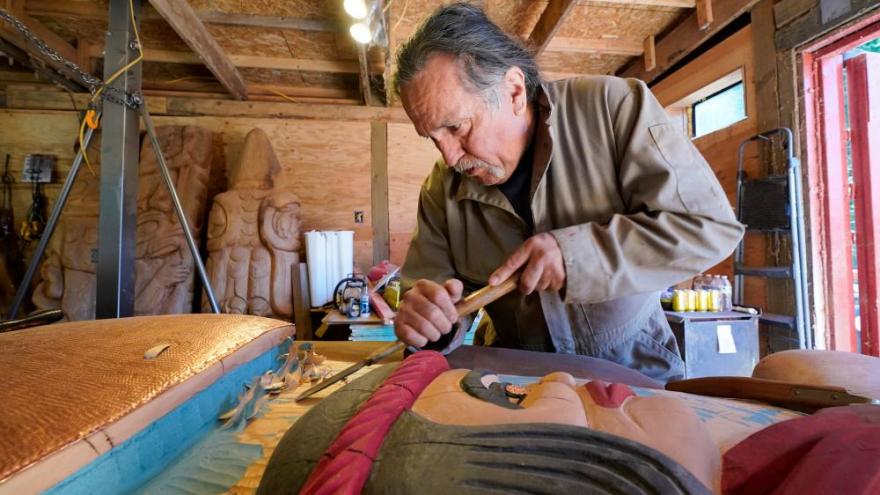 Lummi Nation lead carver Jewell James works on the final details of a nearly 25-foot totem pole to be gifted to the Biden administration at the end of July.

(CNN) -- For the House of Tears Carvers, totem poles are more than masterful works of art -- they're a medium for storytelling, for raising consciousness, for healing.

The group of artisans from the Lummi Nation, one of the original inhabitants of the Pacific Northwest, has for decades hauled its masterful works of art around the country to unite communities around issues of local and national concern.

Organizers are calling the journey the "Red Road to DC," a two-week national tour that will begin July 14 in Washington state and culminate in Washington, DC. Along the way, the House of Tears Carvers plan to stop with the totem pole at a number of sites sacred to Indigenous peoples.

Their goal: To protect those sacred sites from the existential threats of the climate crisis and extractive industries -- and to ensure tribal nations have a seat at the table when decisions affecting them are made.

"By going out and uniting and informing the public, we create a greater voice," said Jewell "Praying Wolf" James, House of Tears lead carver and a citizen of the Lummi Nation. "We have an opinion, and we want to be heard."

Upon its arrival in Washington, DC, the totem pole will be presented to President Joe Biden's administration: partially in recognition of the climate actions it has taken so far and also as a reminder of the promises the federal government made to the first inhabitants of this land.

A fight to protect sacred sites

The totem pole will travel to key cultural sites where battles over land and water rights are playing out, including Bears Ears in Utah, the Black Hills in South Dakota and the Standing Rock Sioux Reservation in North Dakota.

By connecting these places through one journey, organizers hope to bring attention to the challenges each individual community faces and ultimately, build momentum for the last stop in Washington, DC.

"The Lummi Carvers are offering their totem pole as a way to gather the prayers and hopes of many different tribal nations, to bring people together and help each area and tribal nation understand they are not alone," said Judith LeBlanc, director of the Native Organizers Alliance, one of the journey's sponsors.

"That collectively, by building and utilizing the power of our prayers and our beliefs and our hopes and our organizing, we are able to make transformational change happen."

Mackinaw City, Michigan, is one of the stops on the tour. There, the Bay Mills Indian Community has been fighting the existing Line 5 pipeline, as well as a plan to build a new pipeline tunnel under the Straits of Mackinac.

The Straits of Mackinac connect Lakes Michigan and Huron, and are sacred waters for the Bay Mills Indian Community and other tribal nations in the area.

Under a treaty made in 1836, the tribe ceded land to the US for the creation of Michigan. In turn, tribal citizens were granted the right to fish, hunt and gather in that territory, which includes the waters of the Great Lakes and the Straits of Mackinac, said Whitney Gravelle, chairwoman of the Bay Mills Indian Community.

"We have this connection with land and water and the Straits of Mackinac that is deeply tied to our cultural, our traditional and our spiritual identity," Gravelle said, noting that both Line 5 and any additional construction "can actually cause damage to numerous archaeological resources, artifacts and other paleo landscapes that all describe and are a part of our history here in the state of Michigan, as well as in the Great Lakes."

When the totem pole stops in Mackinaw City on July 27, the community plans to hold a water ceremony on the Straits of Mackinac, as well as songs and other activities. It will be a day of celebration, Gravelle said, honoring not just the sacredness of the waters but the tribe's relationship to them.

That the totem pole will pass through so many other sacred places before reaching her own community is not lost on Gravelle.

The meaning behind the totem pole

James thought about all the people whose lives had been forever altered by the tragedy and decided to carve a totem pole. With a group of other Lummi Nation citizens, he took the pole across the country, collecting good thoughts and prayers for the children who lost parents that day, before bringing it to its final destination at a park in Monroe, New York.

In the years since, James has made several similar journeys in an effort to alleviate pain tied to trauma, achieve social and environmental justice and fight for tribal sovereignty.

The group geared up for the national journey earlier this year by taking the new 25-foot totem pole on a regional tour along the West Coast and areas of the South. The pole, which has drawn well-wishers and crowds throughout its travels, was crafted from a 400-year-old Western Red Cedar tree and took about two months to complete.

Some of the images depicted on the pole reference Native heritage, stories and mythologies.

The full moon at the top is a nod to Grandmother Moon, who watches over the waters of the Earth. The eagle is a symbol of power and strength, while the Chinook salmon is there for its importance to tribal nations in the Pacific Northwest and the area's ecosystem. Seven tears represent seven generations of trauma that resulted from colonization, James said.

Other images on the pole demonstrate the group's commitment to certain social justice issues. An image of a child in jail symbolizes the humanitarian crisis at the US-Mexico border, while the red handprints represent the decades-long crisis of missing and murdered Indigenous women.

"There's a story to be told, and like all stories, there are many plots tied to it," James said. "If you can understand all the plots, then you understand the message of the totem pole."

A ceremony and exhibit in DC

After the totem pole passes through the sacred sites on the tour, Indigenous leaders and organizers will present it to the Biden administration on July 29 in Washington, DC.

A ceremony will be held on the National Mall outside the Smithsonian National Museum of the American Indian, where an exhibition about the House of Tears Carvers' totem pole journeys is on view.

The totem pole will be on display at the museum for two days before it is transferred to a more permanent home, which has not yet been announced.

While in the nation's capital, organizers and demonstrators plan to lobby on Capitol Hill for the right to be included and consulted on any decisions about projects of legislation that could affect tribal communities.

"I think the Biden administration has acknowledged the need to engage with tribal nations, but I think they need to be reminded that the time is now, and also that we need to be a part of the decision making," LeBlanc said.