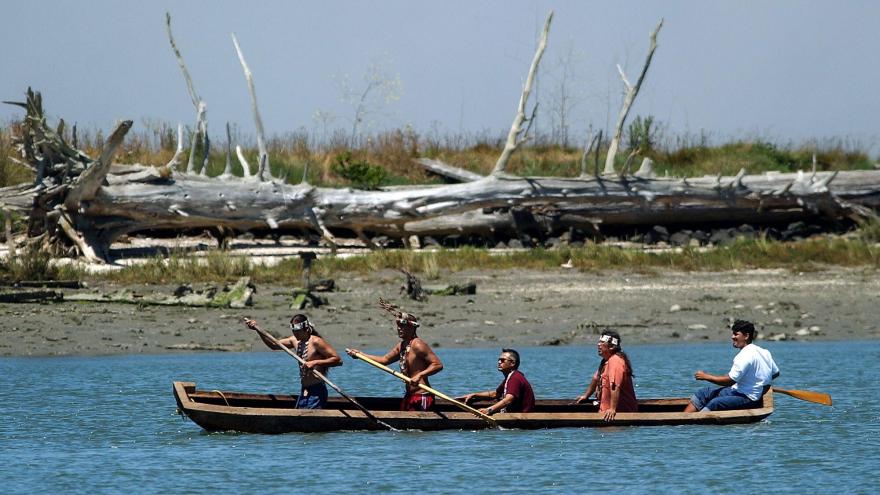 Members of the Wiyot tribe paddle a canoe from Duluwat Island across Humboldt Bay on June 25, 2004.

(CNN) -- Around this time every year, Americans come together to share a feast commemorating a myth about its first inhabitants.

An indigenous tribe did eat with the Pilgrims in 1621 and sign a treaty with the colonists that had settled on their shores -- an act of survival rather one of goodwill and friendship. But the relationship would eventually break down, decimating the tribe's population and whittling away its land.

Nearly 400 years later, the descendants of the very tribe at the heart of the Thanksgiving holiday are still fighting to reclaim their lands -- a fight that ironically hinges on whether or not the tribe meets the federal government's definition of "Indian."

"We're kind of stereotyped as the tribes that met the Pilgrims and that's our whole history, like we ceased to exist in 1621," said Robert Maxim, a citizen of the Mashpee Wampanoag tribe. "That couldn't be further from the truth."

The Mashpee Wampanoag have lived in what's now Massachusetts and eastern Rhode Island for more than 12,000 years. Despite their storied history in the US, they weren't recognized by the federal government until 2007. And in recent years, court rulings challenging whether the tribe's reservation is eligible to be put in trust have posed an existential threat.

Their fight is one in a broader movement by indigenous people across North America to reclaim their lands -- a movement that is gaining steam as the nation grapples with injustices committed against marginalized communities.

Each battle is unique. For some, reclamation is about identity: ceremonies, connections to ancestors and traditional knowledge. For others, it's about economics: being able to hunt for food, access clean water and build homes or schools. And it can be about sovereignty: jurisdiction and governance.

Ultimately, it's about getting indigenous lands back in indigenous hands. Though the fight is not new, activists are seizing on the moment to amplify their demands. Because finally, some non-Natives are paying attention.

Their claims to the land are in limbo

"The origin of being Indigenous is location and ties to the land," said Randall Akee, an associate professor of public policy and American Indian Studies at the University of California, Los Angeles.

So, the demand is simple: Give us the land back.

Their claims are rooted in the US government's dark history of removing indigenous people from their lands, whether through forced seizure or through treaties that promised them other lands or services.

Maxim was born in Mashpee, Massachusetts, and raised in a nearby town. He said he's seen so many areas that once belonged to Mashpee Wampanoag citizens now overtaken by people who don't understand its history.

In the face of everything the Mashpee Wampanoag tribe has endured, it has managed to maintain its identity. So the fact that it's now losing its connection to the land is especially frustrating, Maxim said.

In 2015, the federal government declared it would place about 300 acres of land in Massachusetts into trust for the Mashpee Wampanoag tribe, turning it into a reservation -- a victory after decades of trying to reclaim land.

The trust status meant that the land couldn't be taken away from the Mashpee Wampanoag without the approval of the federal government. It also gave the tribe sovereignty, allowing it to build housing, a school and police department on the land.

But in 2018, the Department of the Interior reversed that decision after a lawsuit brought by area residents, saying the land was ineligible for trust status because the Mashpee Wampanoag tribe wasn't under federal jurisdiction in 1934. In March of this year, the tribe learned that the US would be taking their land out of trust.

"It's worth underscoring how absurd it is that the descendants of the tribe that met Pilgrims, who every American learns about around this time of year, couldn't meet the definition of a 'tribe,'" Maxim said. "It's just a perfect illustration of how messed up, and really, anti-Native, federal Indian policy has been throughout our history."

A federal judge blocked the government from disestablishing the reservation, but the Interior Department appealed the ruling in August.

Now, the tribe is in limbo.

A rare triumph in a centuries-long battle

Yet, one tribe seems to be an outlier.

For thousands of years, the Wiyot people were the stewards of Duluwat Island, situated in the marshes and estuaries of what's now Humboldt Bay along California's northern coast. Then in 1860, a group of White settlers interrupted the tribe's annual world renewal ceremony and massacred scores of Wiyot women, children and elders.

In the years since, the island had been transformed into a shipyard. By 1990, it lay vacant, scattered with scrap metal and contaminated with toxic chemicals.

Last year, the Wiyot had reclaimed almost all of Duluwat Island -- the culmination of decades of efforts to get back their ancestral land.

When 1.5 acres on the island went up for sale, the tribe raised $106,000 to buy it back in 2000. A few years later, the city of Eureka agreed to give them back about 40 more acres. Then in 2015, the Eureka City Council voted to return the remaining 200 acres the city owned on the island, a commitment it made official last year.

The return of Duluwat Island is perhaps the first time that a US municipality repatriated land to an indigenous tribe without strings attached.

"It's part of our completion story," said Ted Hernandez, chairman of the Wiyot tribe.

Since first purchasing those 1.5 acres, the Wiyot tribe has been working to restore the island back to its original state.

Volunteers helped move a large engine off the island. They did away with a wall of sea batteries that was eroding the shell midden. And they worked with other partners to remove the toxic chemicals that had contaminated the soil.

In 2014, they danced on the island again, completing the ceremony that had been cut short more than 150 years ago.

"The island is just one part of our journey," said Cheryl Seidner, a tribal elder and former Wiyot chairwoman. "The other part of the journey is walking on the earth and knowing that it is all sacred and that we need to take care of it and watch over it."

Some non-Natives are trying to make amends

Even before the current political moment, some people were searching for ways to atone for the removal of indigenous people from their lands.

Kim Bergel, a member of the Eureka City Council, first learned about the Wiyot massacre during a third grade field trip while on a ferry tour of Humboldt Bay. She remembers being bothered by the history of Duluwat Island as a child. But as she grew older, she came to understand the magnitude of what transpired there.

Years later, Bergel found herself on the same boat with Seidner. Seidner brought up that the city should return the rest of its land on the island to the Wiyot people, and Bergel said she agreed.

That prospect, along with other frustrations about Eureka's dealings with the tribe, was why she ran for city council in 2014.

"For me, personally, it was very important for healing in our city to do the right thing," Bergel said.

After being elected, she and fellow councilmember Natalie Arroyo began coordinating efforts with Eureka and the Wiyot tribe. By 2015, all the members of the city council were on board with giving back the rest of Eureka's land on Duluwat Island. But because of bureaucratic hurdles, it wasn't officially transferred until October 2019.

The day that the city returned the land to the tribe was "the best, most beautiful day of my life," Bergel said.

"After all of the horrible things that had happened, that our city was so interested in doing this and showing up, that it was a full house ... it was awesome," she said.

On the other side of the country, the United Methodist Church recently returned a plot of land in Ohio to the Wyandotte Nation of Oklahoma.

The mission church and cemetery that sat on that land in Upper Sandusky is a historical site for the Wyandotte Nation, which once inhabited the area. A Black Methodist missionary named John Stewart encountered the Wyandottes there in the early 1800's, and soon the church went on to set up the Wyandotte Indian Mission.

The Wyandottes would worship and study at that church for decades before the US government forced them to leave their homes and move west. But before they left, they entrusted the Methodists to care for the land in their absence.

As the church was preparing to celebrate 200 years of missions, it met with the Wyandottes and floated the idea of returning the land as a way of honoring their centuries-long relationship, said Thomas Kemper, the church's former general secretary of global ministries.

The tribe accepted. And last year, the church gave back the land.

The Methodists had a friendly relationship with the Wyandottes, Kemper said, unlike other religious institutions that attempted to erase the heritage of Indigenous people. But the church's interactions with other Indigenous tribes were sometimes uglier.

"It contributes to the healing of past wrongs -- which have been done by the church to Native and Indigenous people -- because it's a concrete act," Kemper said. "It's not just the words, but it's also a concrete act of giving, of returning this land, of deeding it back to the Wyandotte."

Wyandotte Chief Billy Friend recognized the rarity of that moment. He said the tribe plans to make repairs to the church, put the land in a trust and eventually have it deemed a historic landmark.

"Very seldom do people want to give things back to us," Friend said. "It was just an honor to see people wanting to do the right thing."

A call to close Mount Rushmore

As more Americans reflect on and reckon with the country's racial injustices, the nonprofit advocacy organization NDN Collective says it is partnering with groups such as the Movement for Black Lives to amplify land back movements and achieve what it calls collective liberation.

For NDN Collective, it started with demanding that Mount Rushmore be closed and all public lands in the Black Hills be returned "back to the original stewards," said Krystal Two Bulls, an Oglala Lakota and Northern Cheyenne activist for NDN Collective.

On July 3, activists from NDN Collective were among those who assembled on a highway leading to the Mount Rushmore National Memorial. They were there to protest not only President Donald Trump's visit there that day, but also the monument of Mount Rushmore itself -- a demonstration that took place as protesters around the country were demanding the removal of statues and monuments honoring racist figures.

The massive granite carving of four US presidents is situated in the Black Hills, an area considered sacred ground for the Lakota people. The Black Hills were granted to the Lakota in an 1868 treaty, a promise that the US went back on in 1877 when gold was discovered on the land.

The Supreme Court ruled in 1980 that the land was taken wrongfully and that the Lakota were entitled to compensation that has since grown beyond $1 billion. But the Lakota have never collected: What they want are the Black Hills.

The Mount Rushmore protest was the catalyst for the LANDBACK campaign that NDN Collective launched on Indigenous Peoples' Day this year.

The campaign is both a vehicle to continue the fight for the return of the Black Hills and a mechanism to connect land reclamation movements across the country and coordinate resources, Two Bulls said.

"We are in a moment of the political climate with people really acknowledging what is and isn't working for us," Two Bulls said. "That converged into this moment that we're currently in."

The momentum has been building since the early organizing of their indigenous ancestors, Two Bulls said. Now, as Americans reexamine their history, it's reached a boiling point.