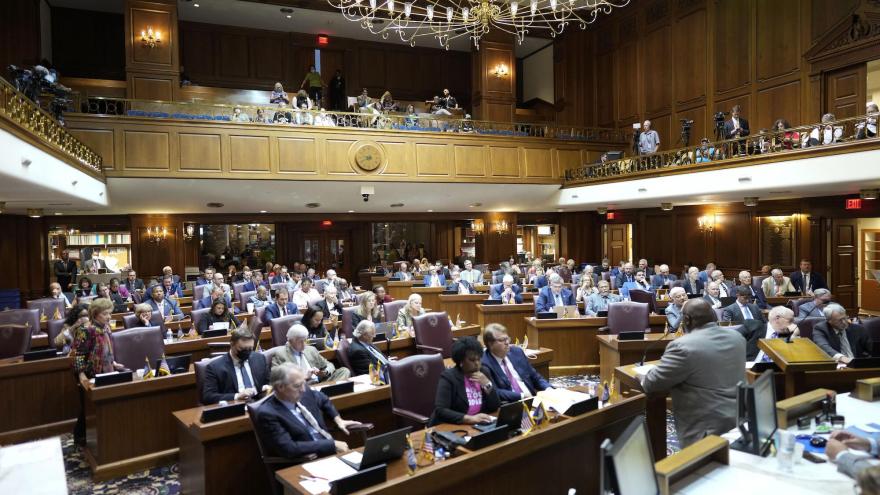 An Indiana law banning abortion at all stages of pregnancy with limited exceptions is now in effect, making Indiana the latest state to enact restrictions on the procedure after the US Supreme Court overturned Roe v. Wade.

(CNN) -- An Indiana law banning abortion at all stages of pregnancy with limited exceptions is now in effect, making Indiana the latest state to enact restrictions on the procedure after the US Supreme Court overturned Roe v. Wade.

The law was passed over the summer during a special session, when Indiana became the first state to pass a restrictive abortion law after the court's decision.

Under the law, abortion clinics are no longer state-licensed facilities and cannot provide abortions. The law now requires that all abortions be performed in a licensed hospital, or an ambulatory outpatient surgical center majority owned by a licensed hospital.

Abortion providers who violate the law are subject to a criminal penalty of up to six years imprisonment and a fine of $10,000.

Medication abortion is already prohibited in the state after eight weeks of post-fertilization age.

Abortion providers and a nonprofit that operates a pregnancy resource center in the state filed a lawsuit last month, seeking to block the ban from taking effect.

They argue that the law "will infringe on Hoosiers' right to privacy, violate Indiana's guarantee of equal privileges and immunities, and violate the Constitution's due course of law clause through its unconstitutionally vague language."

"Hoosiers experiencing or at risk of pregnancy complications that may seriously and permanently impair their health—but that do not meet the limited exception for serious health risks set out in S.B. 1—will be forced to remain pregnant and to suffer serious and potentially life-long harms to their health," they said in their complaint filed in Monroe Circuit Court on August 31.

"Even patients whose pregnancies should qualify for S.B. 1's narrow Health or Life Exception may still be unable to obtain an abortion because physicians will credibly fear that they will be prosecuted for the exercise of their professional medical judgment if government officials disagree with their assessment of a patient's condition."

A hearing on the plaintiffs' motion for a preliminary injunction is scheduled for Monday. The special judge in the case declined on Thursday to issue a temporary restraining order pending the hearing.

All-Options, Inc., a plaintiff and nonprofit that operates a pregnancy resource center and abortion fund in Indiana, said it "will stay open and continue providing financial support for Hoosiers forced to travel out of state for abortion care."

Whole Woman's Health Alliance, another plaintiff in the suit, said its South Bend clinic is forced to stop providing abortions but will also remain open to provide Indiana "counseling on the full range of options available to them" and "support in getting the care they need."