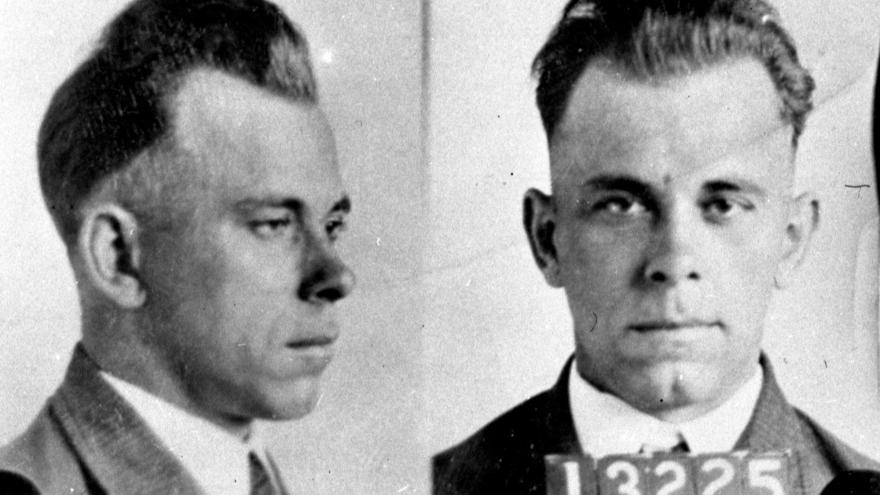 The grave of gangster John Dillinger, once called "Public Enemy No. 1," is set to be exhumed at the end of this year at the wishes of Dillinger's niece and nephew. CREDIT: Chicago Tribune News Service/Getty Images

(CNN) -- The grave of gangster John Dillinger, once called "Public Enemy No. 1," is set to be exhumed at the end of this year at the wishes of Dillinger's niece and nephew.

Michael Thompson, Dillinger's nephew, submitted an application to the Indiana State Department of Health for a permit to disinter the grave underneath Dillinger's headstone, according to documents obtained by CNN affiliate WXIN.

The state health department approved the disinterment for December 31, 2019, with reinterment of the remains to follow on the same day.

The documents contain an affidavit from Dillinger's niece, Carol Thompson, which builds the case that someone other than her Dillinger is buried in the grave.

According to the conventional narrative, Dillinger was buried at Crown Hill Cemetery in Indianapolis, Indiana on July 26, 1934. He reportedly died four days earlier, after being shot by FBI agents outside Chicago's Biograph Theater.

In the affidavit, Dillinger's niece writes that she's seen evidence that the man shot by the FBI was someone other than her uncle.

The FBI disputes Thompson's position in an August tweet, arguing that "a wealth of information" supported their story of Dillinger's demise, including three sets of fingerprints.

They point the public toward a trove of of documents available on their website.

But Thompson says there is evidence that the man in the grave does not match Dillinger's eye color, fingerprints, anterior teeth, ears and head shape.

"It is my belief and opinion that, if the FBI killed the wrong man outside the Biograph Theater, it is also important to identify the man in the grave at Crown Hill Cemetery," Thompson writes.

To do that, the document says there are plans to analyze the body for testing and that the family is allowing the exhumation to be filmed.

The exhumation was originally set for September 16, with plans to film it as part of a documentary slated to air on the History Channel.

But that planned dig was halted during a dispute between the family and Crown Hill Cemetery.

The cemetery had opposed the exhumation, expressing concern in an August statement to the IndyStar that the dig might "cause disruption to the peaceful tranquility of the Cemetery."

CNN has reached out to the cemetery for comment.