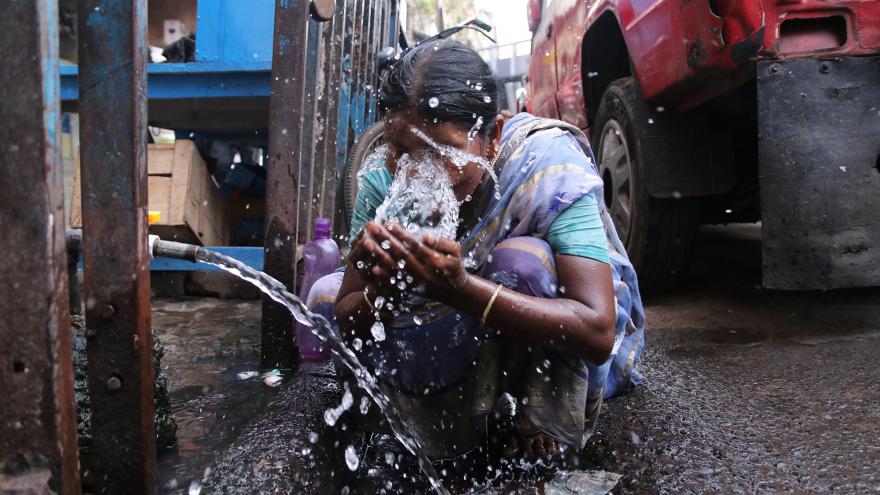 (CNN) -- Life-threatening heat waves arrived in India a month earlier than normal, shattering temperature records with highs reaching over 100 degrees Fahrenheit (38 degrees Celsius) -- and it will only get hotter.

The worst of the heat wave is expected late this week into this weekend with high temperatures approaching 10-15 degrees Fahrenheit (5-8 degrees Celsius) above normal across northern and northwestern India as well as parts of Pakistan.

Over one billion people will be subjected to excessive heat -- 10% of the world's population, according to Scott Duncan, an extreme climate expert.

This region, including New Delhi, could endure temperatures in the mid to upper 40s Celsius -- which means temperatures over 110 and up to 120 degrees Fahrenheit are possible.

And unfortunately, this heat wont sleep.

Extreme nighttime temperatures can be deadly

Little to no relief will come during the overnight hours as minimum temperatures will not dip below 86 degrees Fahrenheit (30 Celsius) in many areas.

Prolonged periods of warm nights can prove deadly as they limit the body's ability to recover from daytime heat.

This presents a major problem for India's population as a large portion lives without air conditioning, creating a life-threatening situation, particularly for the elderly.

Bahmer, a city in India, already recorded a high temperature of 45.1 degrees Celsius -- a whopping 113 degrees Fahrenheit -- on Tuesday.

On the same day, a station in Pakistan tied the record for the highest maximum temperature in the Northern Hemisphere at 116.6 degrees Fahrenheit (47 Celsius), according to Maximiliano Herrera, an expert on climate extremes.

Leading up to the current extreme swell, temperatures were steadily above average for March and April.

The average maximum temperature for India as a whole recorded in March 2022 was the highest recorded in the past 122 years, according to the India Meteorological Department (IMD).

Since March 11, heat waves have affected 15 of the Indian states and Union territories, according to the Centre for Science and Environment (CSE), adding that "Rajasthan and Madhya Pradesh have suffered the most among the states, with 25 heat waves and severe heat wave days each during this period."

The pressure pattern associated with La Niña conditions, which are currently presiding over the Pacific, has persisted longer than expected. This, along with warm waves coming from the Arctic, has caused heat waves to form, according to Raghu Murtugudde, a climate scientist at the University of Maryland.

The current impact of La Niña on the spring and summer seasons in India is completely unexpected, Murtugudde added.

April and May, known as pre-monsoon season, are typically the hottest months of the year when the region bakes endlessly.

This heat would continue to build into the summer months were it not for the cloud cover and rain provided by the monsoon season.

The relief, though welcome, comes slowly.

The Monsoon season, which brings India much-needed precipitation and cooler temperatures, generally starts in early June over the southern part of the country.

However, it takes upward of an entire month to bring relief to places in northern India, which are currently seeing the worst of the heat wave.

On the bright side, the models show that the monsoon seasonal rainfall is likely to be 99% of what it normally is, according to the IMD.

Monsoons are vital to the region because they provide much of the annual rainfall for India, aid irrigation for agriculture, and provide relief from the intense heat waves during the pre-monsoon season.

India's heat waves will only get worse

As with many other extreme weather events, heat waves will become increasingly more severe as a result of climate change.

"The future of heat waves is looking worse even with significant mitigation of climate change, and much worse without mitigation," said Elfatih Eltahir, a professor of hydrology and climate at MIT.

India is among the countries expected to be worst affected by the impacts of the climate crisis, according to the UN's climate change authority, the Intergovernmental Panel on Climate Change (IPCC).

The latest state of the science report from the IPCC in August 2021, noted with "high confidence" that hot extremes have increased in South Asia, and that those climbing extreme temperatures are attributable to human-caused climate change.

"More intense heat waves of longer durations and occurring at a higher frequency are projected over India," it stated.

Without any change, a possible humanitarian crisis could be underway across India as large parts of the country could potentially become too hot to be habitable.