India closes all tiger reserves after Covid outbreaks in zoos 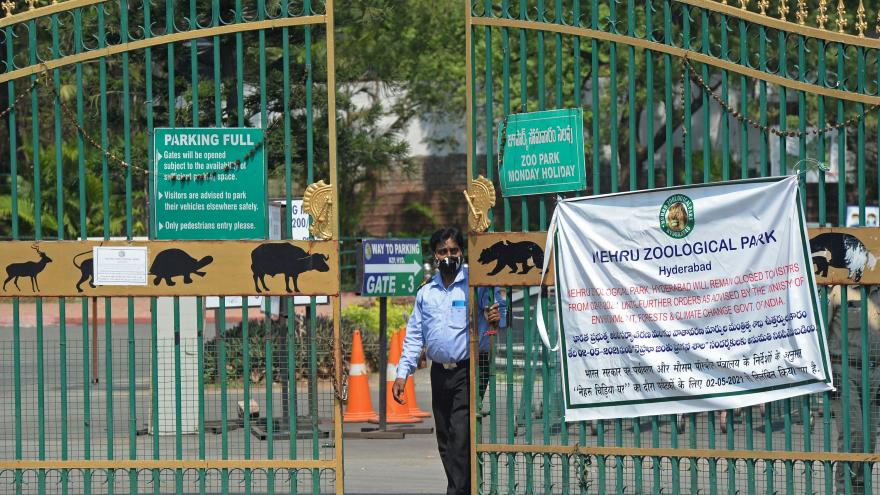 (CNN) -- The Indian government has ordered the temporary closure of all tiger reserves to tourism, after a spate of Covid-19 outbreaks in zoos around the country.

The National Tiger Conservation Authority, an agency under the government's environmental ministry, issued its order on Monday after the death of a Covid-positive lioness a few days prior.

"This latest instance of a zoo animal getting infected by Covid-19 once again indicates the high likelihood of disease transmission from affected human beings to captive wild animals," said the order. "A similar transmission may also happen in tiger reserves."

To prevent tigers and other wildlife from getting infected, all tiger reserves must close for tourism activities until further notice, the order said.

Tigers are an endangered species and fewer than 4,000 remain on Earth, according to the World Wildlife Fund (WWF). Several thousand tigers live in reservations in India, which has seen its population increase in recent years thanks to conservation efforts including expanded forest cover and penalties of jail time for killing the animals.

The latest outbreak took place at the Arignar Anna Zoological Park, also known as the Vandalur Zoo, in the southeastern city of Chennai, the Tamil Nadu state government said in a news release.

A number of Asiatic lions, an endangered species numbering only in the hundreds, had shown symptoms of the disease in the zoo. On Thursday, a symptomatic 9-year-old lioness named Neela died. It remains unclear whether Covid-19 was the direct cause of the animal's death.

Zoo officials and a team of vets immediately quarantined all the lions and started treating them with antibiotics. They have taken samples from the lions, tigers, and other large mammals to send for testing, hoping that genetic sequencing can reveal which strain of the virus infected the lions.

The chief minister of Tamil Nadu, M. K. Stalin, visited the zoo on Sunday to review the situation with a number of other ministers and wildlife authorities. Stalin ordered officials to ensure all zoo staff and animal handlers received vaccinations, and to "provide the best treatment to infected lions," said the release.

The outbreak follows eight positive cases in March among lions at a Hyderabad zoo. Similar outbreaks have also been reported in the lion enclosures of zoos and safaris in Jaipur and Etawah, said the news release. As a precautionary measure, Tamil Nadu closed its zoos to visitors on April 20.

Animals have been infected in other parts of the world, too. In New York, a number of tigers and lions at the Bronx Zoo tested positive for Covid-19 in April, 2020 after showing symptoms including coughing. They have since recovered.

The news sparked worry among zoologists -- after word spread of the Bronx Zoo infections, India's National Tiger Conservation Authority ordered all tiger reserves in the country to observe their tigers for symptoms, and to ensure all animal handlers were Covid-negative.

The recent Covid-19 outbreaks come after India's second wave of the virus, which began in mid-March and peaked in early May. It killed tens of thousands of people, sickened millions, left the nation reeling -- and placed animals at greater risk of infection, too, said Nikolaus Osterrieder, dean of veterinary medicine and life sciences at the City University of Hong Kong.

"It's probably not a coincidence that in India, where you have high numbers of cases, that transmission to animals is happening as a direct consequence," he said. "The more cases in humans, the higher the likelihood that animals, including zoo animals, are getting infected."

Felines like lions and tigers are particularly vulnerable to severe disease, he added. While animals like minks and ferrets may be more susceptible to infection, they generally don't develop severe clinical symptoms -- whereas the feline family, which includes domestic cats, "can succumb to the disease, which can make them really sick."

That poses a risk to endangered species like Neela, the Asiatic lionness. Asiatic lions once roamed habitats from Africa to Greece, but are now only found in India, according to the International Union for Conservation of Nature's Red List of Threatened Species.

There are only 523 known individuals left, according to the WWF -- and they face widespread threats of poaching, habitat fragmentation, and human activities like wildlife tourism.

The zoo outbreaks "just highlight that humans can transmit pathogens to animals, not only the other way around," said Osterrieder, pointing to diseases introduced by humans that now threaten mountain gorilla species. "We always have to be mindful of that."