In the days leading up to his crash, Tiger Woods had been teaching golf to movie and sports stars 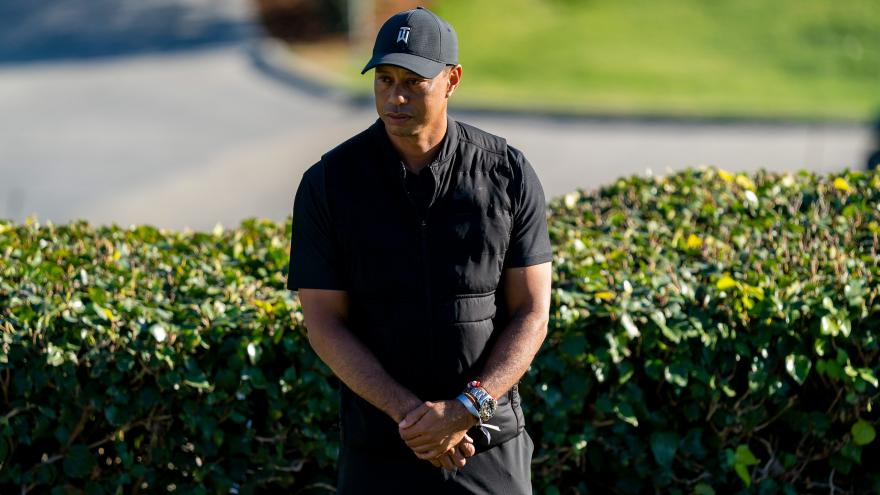 (CNN) -- In the days leading up to the crash that authorities say he was lucky to survive, golf legend Tiger Woods was in his element, hosting a PGA tour event and giving golf lessons to sports stars and actors for a TV special.

It was around 7 a.m. PT on Tuesday in Rancho Palos Verdes, near Los Angeles, when the SUV he was driving crossed a median and went across two lanes of road before hitting a curb, hitting a tree and landing on its side off the roadway in the brush. The 15-time major champion was lucid following the crash and was taken to a hospital for surgery.

The wreck brought to a halt a series of events that had him "in good spirits," said Daniel Rapaport, the Tiger Woods correspondent for Golf Digest.

From a tournament to golf lessons

Woods, 45, spent the weekend hosting a PGA Tour event, the Genesis Invitational at Riviera Country Club in Pacific Palisades. Some of the proceeds of the event went to his foundation.

The tournament provided him a 2021 Genesis as a courtesy car for his time in California. Genesis posted a photo with a smiling Woods to its Instagram, captioning it "The man, the myth, the tournament host."

He was seen intermittently on Saturday and more often during Sunday's final round.

On Monday, he was hanging out with NBA legend Dwyane Wade, actress Jada Pinkett Smith and actor David Spade for a series for Golf Digest and Golf TV at Rolling Hills Country Club.

He was filming a series in which he gives on-course golf instructions to celebrities, according to Golf Digest and Golf TV. He was not playing or hitting, Rapaport told CNN's "Situation Room with Wolf Blitzer."

All of the day's golfers appeared to be smiling and having fun.

"The reason I picked up a golf club. Yesterday was a pretty cool day! Thank you @tigerwoods @golfdigest for this dope opportunity!" Wade wrote on Instagram.

Smith posted photos on Twitter of her and Woods at the links.

"Guess who I had the most awesome golf day with yesterdayyyyyy??? Yes! The magnificent @TigerWoods !!!! Yes ... dreams come true. I can't wait for you to see my golf journey with Tiger. Stay tuned!" she wrote.

Spade joked about Woods' ability as an instructor.

"Golf lesson with this guy today. And you know what? He's not bad... He picks things up very quickly. Good listener," he tweeted with a photo of himself and a smiling Woods.

The golfer had a call time of 7:30 a.m. Tuesday to beginning shooting for the second day at 8 a.m.

Tuesday's scheduled filming was to include Woods with Los Angeles Chargers quarterback Justin Herbert, a source familiar with the shoot told CNN. ESPN reports that New Orleans Saints quarterback Drew Brees was also to be a part of the shoot with Herbert.

CNN has reached out to the New Orleans Saints for comment but has not heard back.

But before he could make it there, Woods crashed -- the SUV rolling over on a stretch of road known for speeding and accidents, authorities said.

Still feeling a 'little bit stiff' after another procedure

Tuesday's wreck came as Woods was still recovering from another surgery.

Woods, who has won a record-tying 82 PGA Tour events, announced earlier this year that he had a recent back operation, the fifth of his professional career.

In a video posted Sunday on the PGA Tour's Twitter feed, Woods told CBS sportscaster Jim Nantz that he was "feeling fine" but a "little bit stiff" after his most recent procedure. He said he was scheduled to get one more MRI.

Woods previously had back surgery -- a spinal fusion -- in 2017 and made his return almost a year later. He went on to launch a remarkable comeback, winning the Masters in 2019.

Sports stars, politicians and actors rally around him

Icons of sports and screen Tuesday posted their wishes to Woods for a speedy recovery.

"Barbara and I just heard about Tiger's accident, and like everyone else, we are deeply concerned," Jack Nicklaus, whose record of 18 major titles Woods has been chasing, tweeted. "We want to offer him our heartfelt support and prayers at this difficult time. Please join us in wishing Tiger a successful surgery and all the best for a full recovery."

"Sending my prayers to ⁦‪@TigerWoods⁩ and his family tonight—here's to a speedy recovery for the GOAT of golf. If we've learned anything over the years, it's to never count Tiger out," he wrote.

Smith also wrote about the golfer she called the GOAT (or the greatest of all time).

"Was just with him yesterday. Don't take not even a MOMENT for granted! I know you're good because your Tiger within is a beast!!!" she tweeted.

"Love you big brother... but We will get through this," tennis star Serena Williams said on Twitter.