In some reopening states, unemployment can pay more than lost jobs 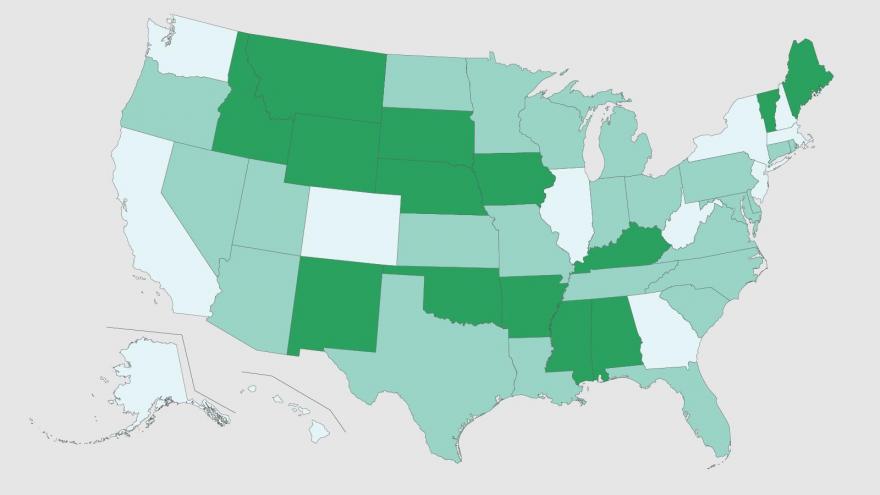 While unemployment benefits serve as a financial lifeline for those who lose their jobs, the program typically replaces only about 40% of workers' wages, on average.

(CNN) -- While unemployment benefits serve as a financial lifeline for those who lose their jobs, the program typically replaces only about 40% of workers' wages, on average.

But now, many laid-off Americans are receiving bigger checks from unemployment than they did from their jobs, thanks to the $2 trillion coronavirus relief package passed by Congress in March. The bill included a historic $600 boost to weekly payments, on top of state benefits, that lasts for up to four months.

In 38 states, the combined payment is equal to or larger than the average weekly wage for the jobs that were lost, according to an analysis of Department of Labor data by Ernie Tedeschi, an economist at Evercore ISI.

However, the enhancement is leading some employers in states that are starting to reopen to worry that their former workers are not rushing to return to their jobs.

Lawmakers knew when they were crafting the relief bill that their unprecedented expansion of the unemployment program might result in the jobless getting paid more than they did at work. But they wanted to act swiftly as the coronavirus was ravaging the nation's economy, and a set amount would be easier for state unemployment agencies' antiquated technology systems to handle.

Another 3.8 million Americans filed first-time jobless claims last week, bringing the total to more than 30 million over the past six weeks, on a seasonally adjusted basis.

Keeping families whole in the short term was the right thing for Congress to do, said Tedeschi, who previously worked at the US Treasury. The pandemic prompted governors to mandate people stay at home and non-essential business to close their doors, forcing employers to let go of millions of workers.

"That is entirely appropriate given that the whole point of the lockdown is that we don't want people going to work, we don't want people interacting with one another," Tedeschi said of the enhanced payment. "So how can we expect them to find jobs if they've been laid off?"

In addition to the extra $600 a week, Congress also extended benefits for 13 weeks and created a pandemic unemployment assistance program to broaden eligibility to those affected by the coronavirus, as well as independent contractors, the self-employed and gig workers.

Several Republican senators, including South Carolina's Lindsey Graham, tried to derail the measure at the last minute, instead pushing an amendment capping the boost in benefits at 100% of laid-off workers' former wages.

"This bill pays you more not to work than if you were working," Graham said.

Many of those who were let go were in industries that usually pay lower wages. Nearly 60% of the 701,000 jobs lost in March were in restaurants and bars, where the typical full-time worker makes about $560 a week.

Now that states are reopening, the enhanced jobless payments are making it harder to bring back workers, some business owners say.

Kurt Huffman, who owns ChefStable Group in Oregon, had to close 20 of his restaurants in mid-March and shift to delivery and takeout only -- furloughing 700 employees. But business was better than expected so he needed to rehire some of the staff to meet the demand.

"Once the $600 federal money started arriving, we just noticed that it was almost impossible to get people to come back to work," he said, noting that he doesn't feel it's fair to ask workers to return when testing is not available.

As businesses try to get back up and running, a growing number of laid-off workers will be offered their old jobs. And many won't have the option of declining and remaining on unemployment.

Several states, including Iowa, Utah and Texas, are warning residents who are called back that they may be cut off from jobless benefits if they refuse to return. General concern about exposure to coronavirus is typically not a sufficient enough reason to stay home and continue collecting benefits, according to a recent guidance from the Department of Labor.

However, some people could remain eligible under the pandemic unemployment assistance program that allows those who were advised by a health provider to self-quarantine or who are caring for children whose schools have closed, for example, to qualify for benefits.