In reversal, US military allows Navy football captain to delay service to try to play in NFL 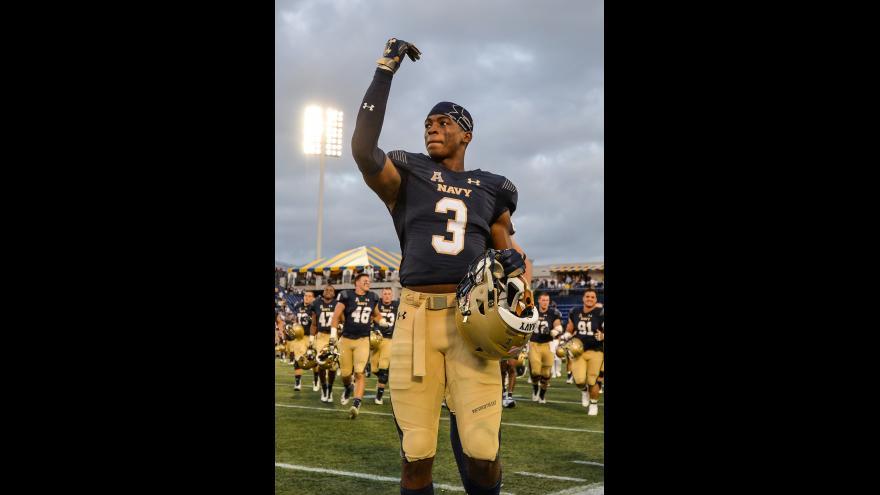 In reversal, the US military allows Navy football captain, Cameron Kinley, to delay service to try to play in the National Football League. Kinley greets the crowd at Navy-Marine Crops Memorial Stadium in Annapolis, Maryland.

(CNN) -- The captain of the US Navy football team will be allowed to try to play in the National Football League after the US military reversed course on Tuesday and approved his request to delay his service.

"Today, I have approved a plan by the Department of the Navy that will permit former Naval Academy midshipman Cameron Kinley to play professional football in the NFL," Defense Secretary Lloyd Austin said in a statement.

"This plan will see Cameron enlisted in the Inactive Ready Reserve for the duration of his football career. Upon completion of his playing time, we look forward to welcoming him back inside the ranks as a naval officer," the statement read.

The reversal represents a significant about-face for the US military several weeks after it initially denied Kinley's service delay request, drawing criticism. It means that Kinley, who had signed with the Super Bowl champion Tampa Bay Buccaneers as an undrafted rookie cornerback and attended the team's rookie minicamp, will now be able to attend the team's training camp in late July.

Kinley had announced last month that the Secretary of the Navy had denied his request and that he was being required to commission in the US Navy as an Ensign.

In a statement on Tuesday, Kinley said that he was "extremely appreciative of Secretary Austin's decision and I am excited to represent our fine military in the National Football League." He went on to thank a number of people, including the team, writing that he's "excited to get back to work in Tampa Bay with my teammates."

Buccaneers General Manager Jason Licht said in a statement to CNN that they are "thrilled" for Kinley and "appreciate the Pentagon's willingness" to work with him.

Austin said on Tuesday that he was pleased with "Navy leadership for finding this way to showcase both Cameron's athletic prowess, as well as the quality and professionalism of our student athletes and our personnel," noting that Kinley would use the opportunity to help with the Navy's recruiting efforts.

President Joe Biden said following the announcement that he was "pleased" with Austin's decision, adding in a statement that he's "confident that Cameron will represent the Navy well in the NFL, just as he did as a standout athlete and class president at the Naval Academy."

Graduates of the service academies are typically required to serve in active duty for five years after graduation, but the Navy's denial was part of a policy that has changed repeatedly in recent years.

During the Obama administration, then-Secretary of Defense Ash Carter issued a policy that allowed some service academy athletes to be placed on reserve status in order to play for pro sports teams. The Trump administration rescinded that policy in 2017 under Defense Secretary James Mattis but then reversed its position in 2019 after Trump mentioned the issue during a White House ceremony with Army's football team.