In his final days, a Vietnam vet at a VA facility was twice found covered in ants, daughter says 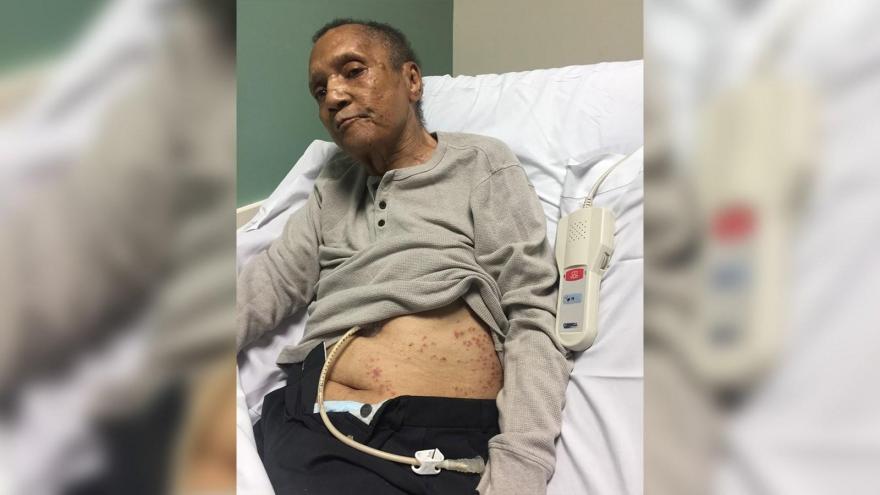 Joel Marrable's daughter said after the staff stripped his bed, bathed him and cleaned the room, the next day he was covered in ants again.

(CNN) -- An Air Force veteran who served in Vietnam and was living his final days at a US Department of Veterans Affairs assisted-living facility was twice found covered in ants and photos show scores of bites on his body, his daughter said Thursday.

Ross said she is not upset with the VA over the ants, but wants her father's story to prompt change.

"Maybe this can move the needle and improve the process," she said. "The VA is busy. They have a lot of patients and huge needs they have to address."

The Atlanta VA Health Care System said it "always strives to provide Veterans with the very best health care available. When we don't meet that standard, we hold ourselves accountable," in a statement to CNN.

"That's why we have initiated a top-to-bottom review of this situation to ensure it never happens again. We have apologized to the Marrable family and taken immediate action to correct this issue and ensure no other Veterans will be affected in the future."

Ross said she was told by the staff last week that workers at the facility visited Marrable in his bed.

She said they told her, "We thought Mr. Marrable was dead. We didn't know what had happened. Everyone jumped in and grabbed him and made sure we did whatever we could to get the ants off of him."

Marrable, 73, had a feeding tube, was weak from cancer and his ability to talk was limited. He was still alive.

Ross said the staff said they stripped the bed and bathed her father, cleaned the room, put new sheets on the bed and put him back in the same room.

The next day he was covered in ants again — on his stomach, feeding tube, diaper, everywhere.

Ross said she reached out to the administrator on duty and they said her father would be moved and they would check on every 15 minutes.

An hour after being in the new room, he died.

"I felt very small in the world Saturday when my dad died," she said. Now I am able to share his story and my dad matters to someone beyond me and my family. Now the world knows and the world cares that this happened."

In a statement to CNN affiliate WSB, the VA said the bedrooms at the facility have been stripped, cleaned and inspected for ants. Other measures taken include the removal of open containers and food in the open being removed, staff making more room visits, daily pest control, a third-party exterminator visit and a future visit by a pest specialist from the VA.

"I am shocked, horrified and downright maddened by the news that a veteran under the care of the VA was treated so poorly and without any regard for his wellbeing," Isakson said. "This patient, at the end of his life, was clearly not being monitored closely enough, and I am so sad for his family who had to discover his insect-infested conditions before anything was reportedly done."

Ross told WSB her father has served in Vietnam in the Air Force and had cancer. She told the station she had asked the staff about bumps on her father and was told it was ants.

She told CNN her father should be remembered as a good person who loved God.