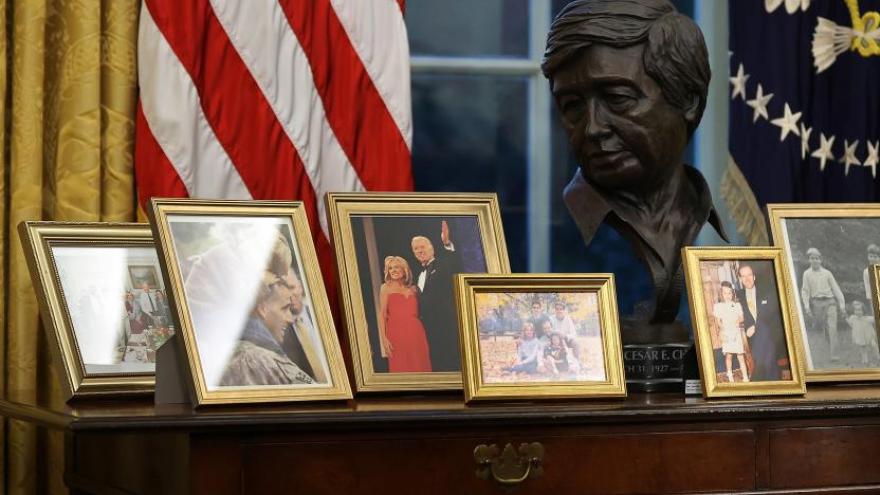 A bust of labor and civil rights activist Cesar Chavez is surrounded by President Joe Biden's photos in a newly decorated Oval Office.

Among the new displays near a collection of personal photos: a bust of Mexican American farm labor leader Cesar Chavez.

"It really speaks to the contributions and importance of the work of our community. Immigrants have given and continue to give to this country, even in the toughest of times," Paul Chavez, his son and the president and chairman of the Cesar Chavez Foundation, told CNN in an interview.

Cesar Chavez brought public attention in the 1960s and 1970s to the plight of Latino immigrants and workers harvesting America's crops. His advocacy led to farmworkers gaining fairer wages, lunch breaks and access to toilets and clean water on the job.

Born in 1927, Chavez joined the Navy as a teen, serving two years before becoming a community activist and organizer. In 1962, Chavez founded the National Farm Workers Association, which later merged to become the United Farm Workers union.

Chavez and his association joined Filipino American farmworkers in the 1965 Delano grape strike, protesting substandard pay and employee treatment. In 1968, Chavez fasted for more than two weeks, which culminated in a meeting with Sen. Robert F. Kennedy, who had been horrified by the working conditions they witnessed and pledged to support Chavez and their cause. The labor groups' efforts ultimately proved victorious.

A lifelong defender of workers' rights, Chavez died in 1993. He was posthumously awarded the Presidential Medal of Freedom the following year.

President Barack Obama honored Chavez during his administration, declaring the anniversary of his birth, March 31, as Cesar Chavez Day. The rallying cry of Chavez's movement was "¡Si se puede!" -- and its translation, "Yes We Can!" became the Obama-Biden campaign's slogan en route to winning the 2008 presidential election.

'We hope this is the beginning of a new day'

Paul Chavez today continues the work set forth by his father, helping those new to the US as well as families and descendants who have lived stateside for decades. Their foundation focuses on affordable housing, educational programs, community service and the rights of workers throughout the Southwest.

The foundation runs a series of radio networks, airing in English and Spanish. Information from medical experts and local leaders on how to combat the Covid-19 pandemic and register for vaccines are a regular feature, as well as the importance of the Black Lives Matter movement.

Chavez noted the toxicity of the prior administration toward Latinos and immigrants, saying, "The last four years you've heard so many derogatory things about our community, you would believe we all got here yesterday and that we're here doing things we shouldn't be doing."

He highlighted the community's long-standing patriotism, answering calls to service and working jobs that often go unfilled by other Americans. "Many times, we're treated as second class citizens," he added, "so what we do is remind people of the contributions and the importance that our community and immigrants bring to improve this society."

Now, with a bust of Cesar Chavez prominently displayed behind the Resolute Desk, his son hopes efforts such as immigration reform will stay at the forefront of the new administration's goals.

"We're happy that the bust is there," Paul said, focused less on the direct honor bestowed upon his father and instead on what it could mean for "a people that my father spent his entire life supporting and empowering."

"It represents the hopes and aspirations of an entire community that has been demonized and belittled, and we hope this is the beginning of a new day, a new dawn in which the contributions of all Americans can be cherished and valued."