In a year that looked nothing like others, it was the little things that helped us cope 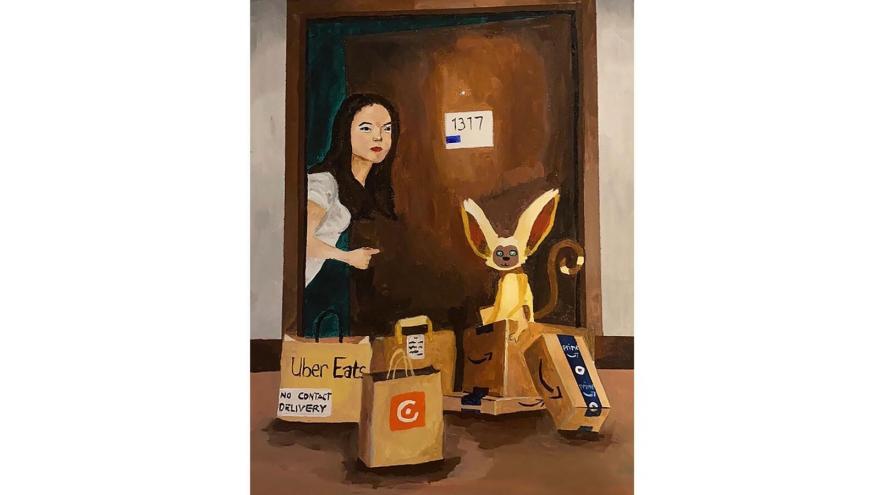 (CNN) -- After years of persistence and hard work, Jasmin Parks-Papadopoulos was at the peak of her professional career when the coronavirus pandemic hit: the executive chef of a well-known hotel group in Colorado.

But the soaring US infection numbers soon brought challenges -- including home schooling her 6- and 7-year-old children while her husband prepared for deployment -- that forced her to leave the position she had worked toward for years.

"It was a very big identity crisis for the first couple of weeks," she said. "Then, I realized that I was going to have a lot of free time on my hands."

So she did what she's always vowed to do in times of hardship: use the experience as an opportunity to find a way to help others. It's also what she did when she found herself all alone during her husband's first deployment, and signed up for a program that allowed her to help other military spouses.

"It's one of my cool coping skills," she said. "I promise myself, I say, 'If you can get yourself through this, if you can pull yourself up by the bootstraps, then when you're done, you'll be able to help someone out.'"

The past year has been the hardest most of us can remember. More than 1.8 million people died globally from complications of coronavirus. More than half of Americans say they know someone who has been hospitalized or died due to the virus.

Nearly everyone's life was upended. And it was often the little things that kept us going, combating the widespread devastation 2020 unleashed: Goa Zhu documented her lockdown loneliness through paintings. Spyridon Karakaisis distracted himself from his country's growing infection numbers and strict measures by delving into long novels and films. Priscilla Segnini battled through job loss and feelings of anxiety with the help of singing.

Parks-Papadopoulos knew now was the time to tackle what has been a lifelong passion: mental health struggles within the culinary community. A third-generation chef and diagnosed with anxiety herself, she says many people who work in the field turn to drugs and alcohol because of the demands of the profession.

With the bits of extra free time she found after leaving her job, she decided to pursue a degree in wellness and lifestyle coaching. Once she's certified, she hopes to volunteer with a local group of mental health professionals who hold regular meetings for the culinary community. The help, she says, will be especially important now, after thousands of industry workers lost their jobs or faced pay cuts.

Here's how others found purpose amid the darkness.

Painting away the days of quarantine

On the other side of the country, Zhu began her lockdown in March. Terrified of the novel coronavirus, the 24-year-old originally from Toronto, Canada, says she stopped seeing friends and only left her Washington, DC, apartment for grocery shopping.

She had just begun her graduate degree and now faced one of her biggest fears: being alone.

"That was emotionally very hard, because you do feel physically lonely," she said.

She turned to all the people she was longing to meet with again. Each day, she spent hours on end FaceTiming her friends and together they watched films, baked, exercised, cleaned their apartments or simply talked. And when the chats had ended, and she found herself alone again, she decided to document her experience through acrylic art.

"I painted a full series of just how I was feeling, being literally, physically by myself in my apartment," she said. "It was a form of expression of how I felt at that specific time."

She painted a picture of a friend on FaceTime. In a self-portrait, she depicted herself with long hair, a reminder of what months without a haircut looked like. In the picture's frame, she wrote words reminiscent of her time stuck inside: quarantine, fear, loneliness, among others.

She painted a weighing scale, and another of her front door, crowded with Amazon Prime boxes, Uber Eats bags and other deliveries.

She painted another self-portrait when the Trump administration tried to limit the length of time international students can remain in the US.

"That was very stressful for me that week because I had an internship lined up and if they took away my Visa, I could not do my internship," she said. "I painted my throat as what the doctors would see..because I felt like I had a lack of voice over my future."

She's now back home in Toronto, quarantining with her family, but says the paintings serve as important reminders of the challenges she faced.

"Just being faced personally with one of my biggest fears of being physically alone .. I've survived it and gotten stronger," she said.

Getting lost in fictional worlds

Halfway across the world, Karakaisis says his biggest challenge was "coping with loneliness."

The 23-year-old spent two lockdowns in two different countries: In the spring, he lived in an apartment in his hometown of Thessaloniki, Greece, away from his family as he finished up his last weeks of college, in fear he would unknowingly infect them with coronavirus.

Like thousands of others his age, his graduation looked nothing like those of years past. He left for the Netherlands to pursue a master's degree, where he again found himself under tough restrictions.

He turned to books and films, quickly devouring novels like "The Name of the Rose," by Italian author Umberto Eco.

But it was the films he watched, he says, that helped him the most, offering a glimpse into the distant reality he craved to return to.

"Movies were 'opening a window' (and) giving me an alternative to experience life in pictures," he said. "The outside world, traveling, drinking in bars with friends."

The joy that art brought was often bittersweet, reminding Karakaisis what he was deprived of.

"What 2020 taught me is not taking anything for granted," he said. Things like "a simple chat with a friend in person. Taking long walks... great architecture, enjoying the sun or simply being happy that I would see people walking down the street on (a) sunny Sunday morning."

Segnini says it's been the singing classes she decided to take at the start of the pandemic that have helped her stay positive, even after she lost her marketing job over the summer.

"I was just trying to find something to distract myself ... that was going to bring me joy," she said.

The 30-year-old was visiting Philadelphia, where her husband lives, for what was supposed to be a brief trip in March and had planned to quickly return to her graduate school program in Washington, DC.

But the classes soon went virtual, and as parts of the United States began to shut down in response to the spreading coronavirus, she decided to stay where she was.

"I felt like I was not prepared, and I didn't have a plan to face everything," she said of the pandemic.

She struggled with feelings of anxiety and said quickly felt burned out.

"So I said, 'OK, what can I do that can bring me joy?' That's when I was thinking, 'What is something that I always wanted to do?'"

"So I started singing classes."

It's something she says she's wanted to try her whole life, but never got around to before. After reaching out to a friend in Costa Rica, her home country, who was taking classes through Zoom, Segnini connected with a professor. For nearly nine months, she had a singing class every week.

"It's so cliche, but that's what Covid taught me: Life is too short, you basically have only one life and time is limited, because there were so many things that I wanted to do prior (to) Covid that I was just like, 'Oh, I can't do this because I'm busy.'"