In a matter of hours, thousands fled their homes to avoid rushing waters from breached Michigan dams 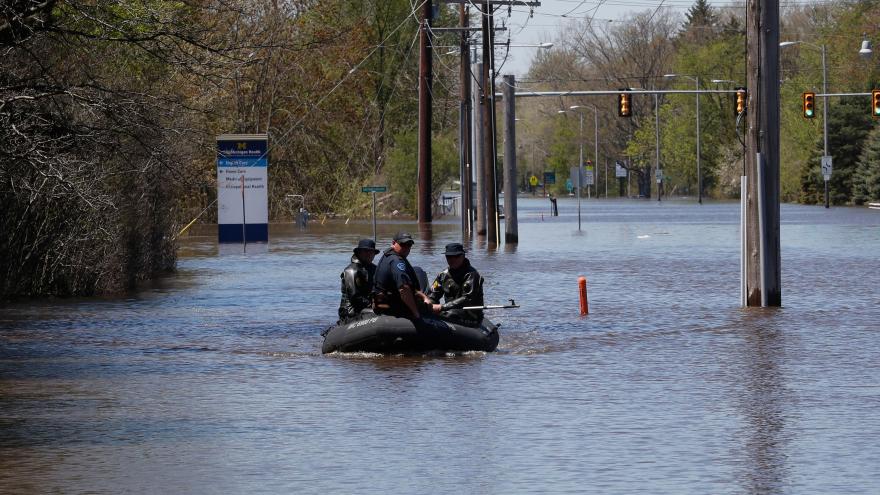 By Wednesday night, the water had begun receding from many areas, but some roads remained impassable or closed, according to officials. But residents should expect tostay away from home for a couple of days, said Midland spokeswoman Selina Crosby Tisdale.

The river, swollen from heavy rains that ravaged the state for days, crested at 35.05 feet Wednesday afternoon, officials said.

Officials are now monitoring the situation around the Sanford Dam, which according to Midland City Manager Brad Kaye, did not completely fail.

"We're cautiously optimistic that as the waters are dropping down, that risk continues to decrease," he said.

No deaths and no serious injuries have been reported, officials said on Twitter.

While speaking to workers at a Ford production facility in Michigan on Thursday, Trump said he would tour the damage "at the appropriate time."

"We're going to help you out," the President said.

It's an added crisis to a state already grappling with effects of the coronavirus pandemic. Officials said workers at shelters that were set up during the floods took temperatures and kept evacuees away from each other to maintain social distance.

The governor said any orders relating to coronavirus would be locally suspended if they impede emergency responses for the flooding.

"On Tuesday, we were trying to evacuate 10,000 people and social distance. And as you can imagine, incredibly stressful circumstances," Whitmer said in an interview on "CBS This Morning" on Thursday. "But as I surveyed the damage yesterday from the air, there's no question it was the right thing to do."

Whitmer praised Midland residents for taking the evacuation seriously and credited them for the fact no casualties have been reported. Now, officials are focused on keeping people safe as the water recedes, she said.

"But there's no question that this was a devastating event," Whitmer said.

'It's full of water'

The floods were a "traumatic event" for residents in the Midland community, which sawanother flooding event in 2017, Midland County Administrator and Controller Bridgette Gransden said.

"A lot of our folks in this community who had damage and loss have really just recovered," Gransden added.

She noted the financial, emotional and mental impact this would have on residents but added they are "blessed" not to have any loss of life.

"We will continue to pull together as a community to help offer the folks who have suffered so much loss during the last several days."

Waters from Wixom Lake, which was held back by the Edenville dam, rushed along the river for hours. By Wednesday morning, so much of the lake had drained that parts of the lakebed remained exposed.

Norma Howe, who's been in her home for more than 30 years, told CNN affiliate WJRT there were still marks of how high flood waters reached inside her house before it receded. Almost everything she owned was destroyed.

"Everything's gotta be replaced," she told the news station. "The floor's got to be replaced. The dishwasher's gotta go. I just bought an electric stove, it's full of water. And I just bought a dryer, it's gone."

"It's terrible. I don't know what else to say."

Another resident told the affiliate it seemed everything was swallowed by the water in a matter of seconds.

"Horrendous. It's just horrendous," Sheila Mesler, a resident near Edenville Dam, told the station. "Unbelievable, unbelievable. It's gone in a minute like that, it's just gone."

Theextent of the damage caused from the floods is still unclear.

Gov. Whitmer said Wednesday the state will be investigating the operators of the two dams to figure out what may have caused the failures.

"This incredible damage requires that we hold people responsible and we are going to pursue every line of legal recourse that we have," Whitmer said.

Documents available on the Federal Energy Regulatory Commission show federal regulators warned for more than 20 years of inadequate spillways at the Edenville dam. And the federal government threatened large fines against one private company that operated the dam until it eventually revoked its license in 2018.

Inspectors warned in January 1999 that the operator needed to increase the capacity of the dam's spillways, the documents show.

When the current owner of the dam took over operations in 2004, the company did not come up with "adequate" plans for increasing spillway capacity in the ensuing 13 years, according to documents filed by FERC. That company eventually had its license revoked and a local task force was given a preliminary permit to operate the dam.

But that local task force does not expect to fully take over dam operations until 2022.