In a 5-4 ruling, Supreme Court sides with religious groups in a dispute over Covid-19 restrictions in New York 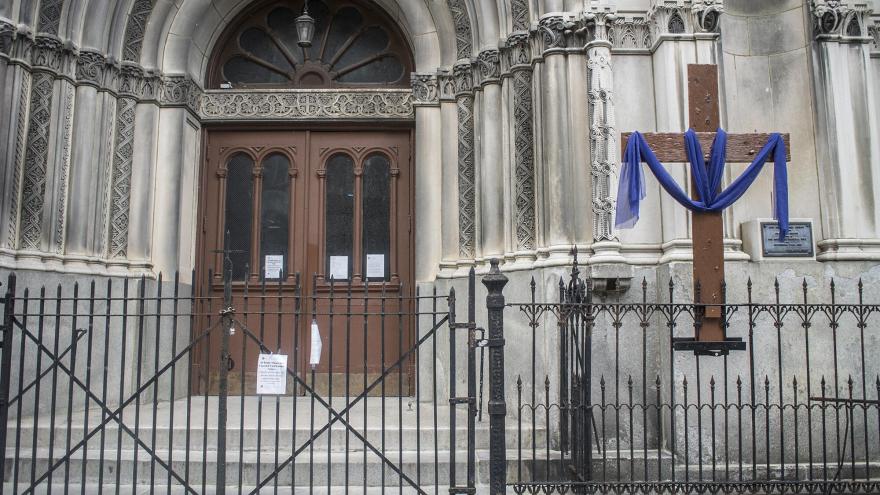 In a 5-4 ruling, the US Supreme Court sided with religious organizations in a dispute over Covid-19 restrictions put in place by New York Gov. Andrew Cuomo limiting the number of people attending religious services.

(CNN) -- In a 5-4 ruling, the US Supreme Court sided with religious organizations in a dispute over Covid-19 restrictions put in place by New York Gov. Andrew Cuomo limiting the number of people attending religious services.

The case is the latest pitting religious groups against city and state officials seeking to stop the spread of Covid-19, and it highlights the impact of Justice Amy Coney Barrett on the court. The decision comes as coronavirus cases surge across the country.

In the late-night decision, Barrett sided with her conservative colleagues in the dispute, while Chief Justice John Roberts joined the three liberal justices in dissent.

Last spring and summer, before the death of Justice Ruth Bader Ginsburg, the court split 5-4 on similar cases out of California and Nevada, with Roberts and the liberals in the majority siding against houses of worship. Barrett was confirmed in October to take Ginsburg's seat.

In the main, unsigned opinion, the majority ruled in favor of the Roman Catholic Diocese of Brooklyn and Agudath Israel of America that argued that the restrictions violated the Free Exercise Clause of the First Amendment because the regulations treated the houses of worship more harshly than comparable secular facilities.

The majority said that the regulations are "far more restrictive than any Covid-related regulations that have previously come before the court, much tighter than those adopted by many other jurisdictions hard hit by the pandemic, and far more severe than has been shown to be required to prevent the spread of the virus" at the religious services in question.

The restrictions on attendance are divided up by geographic zones in areas classified as "red" or "orange" zones.

The Roman Catholic Diocese of Brooklyn issued a statement Thursday morning applauding the court's decision, saying that they are gratified and appreciate the court's recognition of a "clear First Amendment violation and urgent need for relief in this case."

"I have said from the beginning the restrictions imposed by Governor Cuomo were an overreach that did not take into account the size of our churches or the safety protocols that have kept parishioners safe," Reverend Nicholas DiMarzio, Bishop of Brooklyn, said in a statement.

Agudath Israel of America similarly celebrated the Supreme Court's 5-4 ruling in their favor.

"This is an historic victory," Rabbi Chaim Dovid Zwiebel, Executive Vice President of Agudath Israel, said in a statement. "This landmark decision will ensure that religious practices and religious institutions will be protected from government edicts that do not treat religion with the respect demanded by the Constitution."

In court papers, lawyers for Cuomo argued that the restrictions were necessary to help stop the spread of Covid-19 and that houses of worship weren't being treated differently than similar secular businesses. They also said that while the dispute was pending, Cuomo had already lifted any restrictions that applied to the organizations.

"Not only is there no evidence that the applicants have contributed to the spread of COVID-19 but there are many other less restrictive rules that could be adopted to minimize the risk to those attending religious services," the Court held.

"Members of this Court are not public health experts, and we should respect the judgment of those with special expertise and responsibility in this area," the court said. "But even in a pandemic, the Constitution cannot be put away and forgotten."

The court said that even though Cuomo had lifted some restrictions, the houses of worship "remain under a constant threat" because the restrictions could always be reinstated.

Lower courts had sided with Cuomo.

Cuomo said Thursday that the ruling was in essence the court "making a statement that it's a different court."

"The basic point is you know why does the court rule on an issue that is moot unless -- and which they had just decided several months before in other cases..which presented the same argument -- why rule on a case that is moot and come up with a different decision than you did several months ago on the same issue? You have a different court and I think that was the statement that the court was making," Cuomo said.

Lawyers for the diocese had told the justices in court papers that the "pandemic alone cannot justify overbroad, untailored closure orders of indefinite duration directed at all houses of worship, that in another time would plainly be found to violate the Constitution."

And lawyers for the Agudath Israel of America said that the governor has specifically targeted Orthodox Jews who have "violated his prior rules."

"The Governor's guilt-by-religious-association restrictions have made it impossible for Applicants and their members to exercise their religious faith," they argued.

6 opinions in the late-night ruling

In all, the late-night ruling consisted of six different opinions.

Justice Neil Gorsuch wrote his own concurrence -- joined by no other justice -- to explain his vote.

He said that other businesses such as bicycle repair shops, did not have similar restrictions.

"So, at least according to the Governor, it may be unsafe to go to church, but it is always fine to pick up another bottle of wine" or "shop for a new bike," Gorsuch wrote.

He was critical of the reasoning of a decision penned by Roberts in May rejecting a request from a church in California to block limitations on the number of people who could attend religious services during the pandemic.

Gorsuch said the court precedent Roberts cited in that decision "hardly supports cutting the Constitution loose during a pandemic."

For his part, Roberts said he was in dissent because while "it may well be that such restrictions violate the Free Exercise Clause," Cuomo had revised the restrictions after the religious organizations had filed their challenge.

"It is a significant matter to override determinations made by public health officials concerning what is necessary for public safety in the midst of a deadly pandemic," Roberts wrote, and said that the houses of worship could have returned to court if Cuomo had reversed himself.

But Roberts -- who often works to keep the court out of the political fray and divisive atmosphere that has dominated the other branches of government -- had stern words for Gorsuch's criticism of the dissenters' reasoning.

"They simply view the matter differently after careful study and analysis reflecting their best efforts to fulfill their responsibility under the Constitution," he said.

He also pointedly defended his own reasoning in the case from May.

Justice Stephen Breyer, joined by Justices Elena Kagan and Sonia Sotomayor, said that the regulations were designed to "fight the rapidly spreading -- and, in many cases, fatal -- COVID-19 virus," and that they allowed the governor to identity hot spots where the virus had spiked. Breyer noted the grisly statistics concerning the virus that has infected more than 12 million Americans and is currently surging. "The Constitution principally entrusts the safety and the health of the people to the politically accountable officials of the States," Breyer wrote.