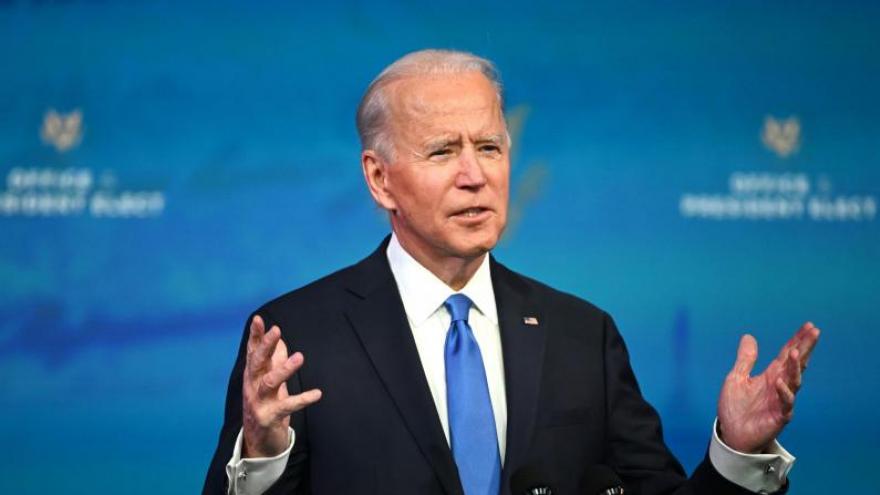 Last week, immigrant advocacy groups met with the Joe Biden transition team on family separation and next steps as part of a series of ongoing listening sessions, according to a source familiar with the meeting.

(CNN) -- Immigrant advocacy groups, who for years scrambled to identify and reunite families separated at the US-Mexico border, are now preparing for the incoming administration and steps to rectify the trauma experienced by parents and children.

Last week, immigrant advocacy groups met with the Joe Biden transition team on family separation and next steps as part of a series of ongoing listening sessions, according to a source familiar with the meeting. Alejandro Mayorkas, Biden's pick to lead the Department of Homeland Security, has also met with immigration leaders, among other groups, according to another source familiar with the discussions.

Immigrant advocacy groups hope Biden's administration can work toward restoring trust with the families who've grown increasingly skeptical of the US since having their kids taken from them.

"It's going to take a long time for families to trust the government if they're not seeing action," said Cathleen Caron, executive director at Justice in Motion, which is leading the on-the-ground efforts to locate the deported parents who were separated from their children.

Advocates have been putting together a list of recommendations on how the government can work to rectify the consequences of family separation and address the situation in a thoughtful and holistic manner, according to Conchita Cruz, a co-executive director of the Asylum Seeker Advocacy Project, which represents separated families.

The so-called "zero tolerance" policy -- which called for the criminal prosecutions of every adult illegally crossing the border and, as a result, the separation of thousands of families -- became a flashpoint during the Trump administration. The policy came to encapsulate the lengths President Donald Trump was willing to go to in order to deter migrants from coming to the US, regardless of their circumstances, and it revealed the disarray that ensues when agencies are unprepared.

Biden has condemned the policy, calling it "criminal" during a presidential debate in October. "Their kids were ripped from their arms and separated. And now they cannot find over 500 sets of those parents and those kids are alone. Nowhere to go. Nowhere to go. It's criminal. It's criminal," he said.

Since 2018, when the "zero tolerance" policy was implemented, court filings and watchdog reports have continued to shed light on the consequences of family separation, revealing the information withheld by the US government and the hundreds of parents who have yet to be reunited with their children.

"We're starting from the premise that this is one of the low points of the last four years, one of the worst ongoing atrocities that needs to be rectified," said Tom Jawetz, the vice president of immigration policy at Center for American Progress.

One of the first expectations of the incoming administration, Caron said, is scrubbing agencies to ensure there's no information or data that's been held back that could be helpful to identifying and locating families.

A recent court filing in an ongoing family separation case also revealed that the Trump administration would hand over information from the Executive Office for Immigration Review, an agency under the Justice Department that oversees the US immigration court system. That database will provide needed phone numbers and addresses to locate additional families.

But beyond assuring that all family details have been provided, groups stressed that a Biden administration should focus on rectifying the damage done, leaving the process of locating families up to the groups that have worked on the issue.

The American Civil Liberties Union, which has led litigation against the Trump administration over family separation, outlined five steps the incoming administration should consider taking when tackling the issue.

Those steps include allowing the parents and children who were separated and then deported to return to the United States, as well as giving some type of legal status to those families that were separated and creating a victims fund to help families with trauma and medical needs.

"Finally and importantly, while we of course welcome any help the Biden administration can give us to find the remaining families (now the parents of 628 children), that is not where we would like to see the new administration concentrate its efforts," said Lee Gelernt,an attorney at the ACLU. "I am confident that we will ultimately find the families, but only the government can reunite the families and provide them with legal status in the United States."

Gelernt said that through the litigation they've learned of nearly 5,500 separations since July 2017.

Advocate groups have also called for accountability and transparency to fully account for the "zero tolerance" policy and its ramifications, as well as factoring in the input of parents who were separated from their children.

Biden has pledged to sign an executive order to form a task force that will focus on reuniting separated families. While the creation of a task force has been welcomed, immigrant advocate groups caution that it shouldn't supplant the efforts of the last two years.

"We need to make sure we're using all our resources to support those efforts, rather than thinking the task force can itself serve as search and rescue," Jawetz said, adding that the task force could play a useful role in providing a "single focus for inter-agency efforts that will have White House involvement."

"Task force is great, but we don't want it to be a stall tactic or take too long," Caron echoed. "We need a focal point in the government to be able to have the conversations with."

Speaking virtually at an American Business Immigration Coalition summit this month, Mayorkas nodded to the restrictionist policies of the Trump administration, saying that "we must stop vilifying these communities," and he cited the family separation policy.

"There is no more powerful and heartbreaking example of that inhumanity than the separation of children from their parents," he said.