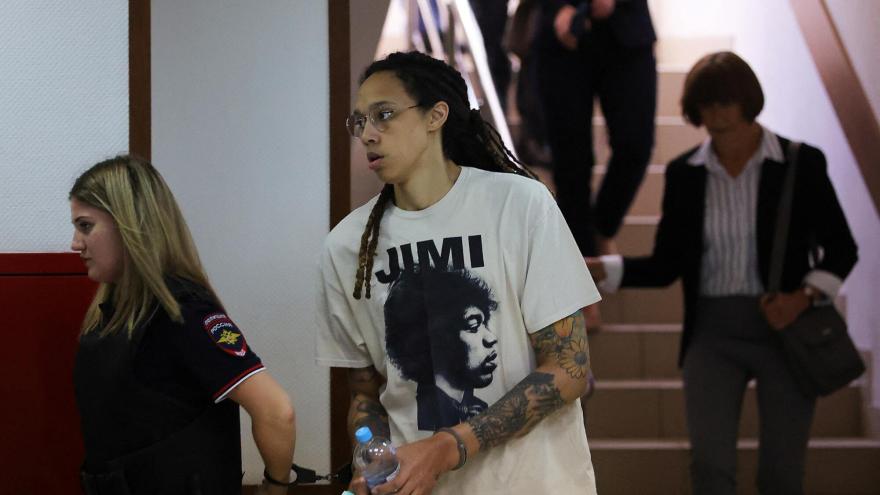 WNBA player Brittney Griner is escorted before a court hearing in Khimki outside Moscow on July 1, 2022.

(CNN) -- WNBA star Brittney Griner, in a handwritten letter to President Joe Biden, said she fears she will be detained in Russia indefinitely and pleaded with the President not to forget about her and other American detainees.

"(As) I sit here in a Russian prison, alone with my thoughts and without the protection of my wife, family, friends, Olympic jersey, or any accomplishments, I'm terrified I might be here forever," she wrote, according to a statement released by the communications company representing the Griner family.

Griner, 31, who has played in Russia during the WNBA's offseason, was arrested February 17 at a Moscow airport, a week before Russia invaded Ukraine. Russian authorities claimed she had cannabis oil in her luggage and accused her of smuggling significant amounts of a narcotic substance, an offense punishable by up to 10 years in prison. She went on trial at a court near Moscow on Friday on drug smuggling charges.

Griner's supporters and US officials say she has been wrongfully detained and have called for her release as fears mount that she is being used as a political pawn amid rising tensions between Russia and the US.

Griner's letter to Biden, according to the statement from the communications company, was delivered to the White House on Monday morning. Three excerpts from the letter were made public, while the rest is being kept private, the statement said.

"On the 4th of July, our family normally honors the service of those who fought for our freedom, including my father who is a Vietnam War Veteran. It hurts thinking about how I usually celebrate this day because freedom means something completely different to me this year," Griner wrote to Biden.

"I realize you are dealing with so much, but please don't forget about me and the other American Detainees. Please do all you can to bring us home. I voted for the first time in 2020 and I voted for you. I believe in you. I still have so much good to do with my freedom that you can help restore. I miss my wife! I miss my family! I miss my teammates! It kills me to know they are suffering so much right now. I am grateful for whatever you can do at this moment to get me home."

Griner's wife, Cherelle, told CNN last week she wants US officials to do whatever they have to do to bring the basketball legend home -- and she needs to see them do more.

In the only interview she gave on the eve of her wife's trial in Russia, Cherelle Griner sat in the Phoenix Mercury locker room and called for more action.

"It's really, really difficult. This is not a situation where the rhetoric is matching the action," she said. "I do have to unfortunately push people to make sure that the things they're telling me is also matching their actions, and so it's been the hardest thing to balance because I can't let up. It's over 130 days and BG's still not back."

The US House of Representatives last month passed a bipartisan resolution calling on the Russian government to immediately release the WNBA star.

"Not a day goes by that we aren't thinking of Brittney and working to get her home," Democratic Rep. Greg Stanton of Arizona, who sponsored the resolution, said in a statement. "We will continue to push for her release and make sure that she is not forgotten."

Stanton previously served as mayor of Phoenix, where Griner plays for the WNBA's Phoenix Mercury.

Stanton introduced the resolution in May along with Democratic Reps. Sheila Jackson Lee and Colin Allred of Texas, Griner's home state.

"I'm grateful for this overwhelming show of support from Congress. We need to be doing all we can to keep Brittney's case on the forefront and finally put an end to this nightmare," Cherelle Griner said in a statement at the time.

CORRECTION: An earlier version of this story misspelled the first name of Brittney Griner.