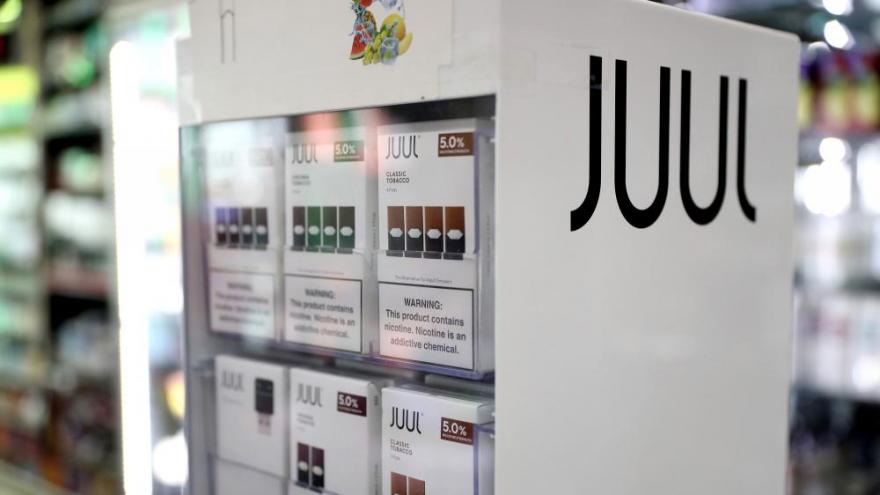 Illinois is the latest state to file a lawsuit against e-cigarette maker Juul, alleging the company undid "years of progress made to reduce youth smoking rates."

(CNN) -- Illinois is the latest state to file a lawsuit against e-cigarette maker Juul, alleging the company undid "years of progress made to reduce youth smoking rates."

Juul's e-cigarette device resembles a USB flash drive, can be charged via a USB port, and can be used discreetly, all features that make Juul's device more appealing to youth, according to the lawsuit. It cited a recent FDA study that showed a sharp increase in the number of high school students using e-cigarettes from 2017 to 2018.

"Juul had a central role in undoing years of work by government agencies and anti-tobacco activists in order to addict a whole new generation to nicotine," the lawsuit states.

Juul hasn't reviewed the complaint yet but has been "focused on resetting the vapor category in the U.S. and earning the trust of society by working cooperatively with attorneys general, regulators, public health officials and other stakeholders to combat underage use and convert adult smokers from combustible cigarettes," Juul Labs spokesman Austin Finan said in a statement to CNN.

Juul has stopped accepting US orders for its mint-flavored Juul pods and suspended all broadcast, print, and digital product advertising in the US, according to the statement.

The company said earlier this year that it would start selling only the Virginia Tobacco, Classic Tobacco and Menthol flavors in the US after recent research showed mint flavor was attractive to young people who vape.

In the Illinois lawsuit, Raoul says the company began targeting adult smokers only after it faced sharp criticism to its youth-friendly marketing tactics. Juul launched the "Make the Switch" campaign in 2018, which featured ex-smokers using Juul products to quit smoking cigarettes, the lawsuit says.

"Juul's product is not approved by the FDA as a smoking cessation device and has not put forth credible evidence to support such approval," the lawsuit says. "However, Juul continues to market its product as if it did so."

In its statement, Juul says the company's customer base "is the world's 1 billion adult smokers and we do not intent to attract underage users."

The other states suing

At least five other lawsuits were filed against the company last month focusing on its advertising campaigns.

That lawsuit stemmed from an investigation by the attorney general's office, Stein said.

"My investigation showed two things: One, it targeted young people. And two, it misleads the public about the potency of nicotine in its products," he said. "You only have to walk through any high school parking lot in North Carolina to see how pervasive Juul is among young people in our state."