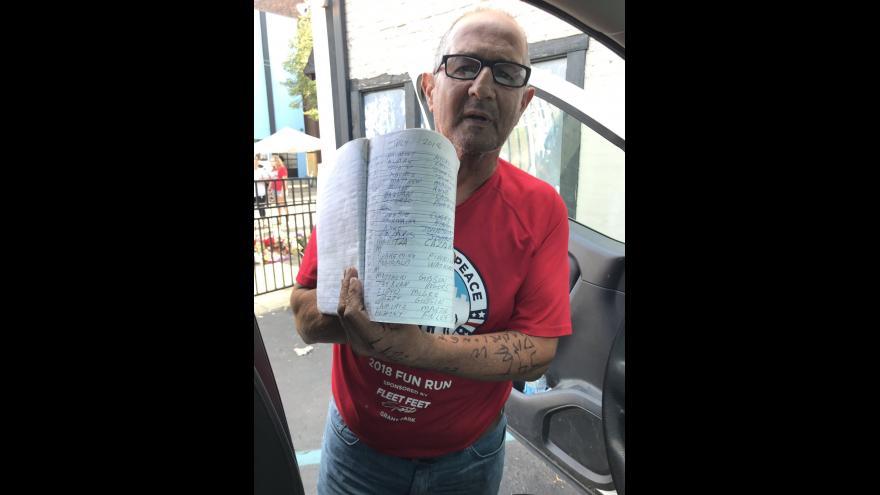 Greg Zanis, the Illinois man who for years has brought crosses and other remembrances to sites of mass shootings and other disasters, will soon need a cross of his own. The 69-year-old Crosses for Losses founder was diagnosed late last year with bladder cance

(CNN) -- Greg Zanis, the Illinois man who for years has brought crosses and other remembrances to sites of mass shootings and other disasters, will soon need a cross of his own.

The 69-year-old Crosses for Losses founder was diagnosed late last year with bladder cancer. He was originally given a few years to live, but the cancer spread and his health crumbled, his family says. He's in home hospice care and doesn't have long left.

"I'm very, very devastated with the whole thing. I can't stand the thought of doing nothing," the self-professed workaholic told CNN during a phone interview, the medications reducing his normally booming voice to sotto voce.

His friends and loved ones -- as well as those he touched in almost a quarter-century of delivering and erecting about 27,000 memorials created in his Aurora, Illinois, workshops -- want to see him and share their condolences.

With Illinois under stay-at-home orders amid the coronavirus pandemic, it's not safe for Zanis to accept visitors. His daughter, Susie, plans to host a "living visitation" Friday so folks can come say hello and goodbye from the yard, and Zanis will greet them from the front porch window. Signs expressing fond wishes and memories are encouraged.

"God used him in a wonderful way, and I'm happy that He used him to bless others the way he did," Susie Zanis said. "We're going to miss him terribly here, but the Lord is faithful, so one day at a time."

'Lots of pain all the time'

A carpenter's life spent around screaming power tools left Zanis hard of hearing. Conversations, whether in his big white pickup truck or over the phone, involved a good deal of yelling by both parties ... as well as laughing.

He's always been quick with a joke -- "I don't drink beer. I guzzle it," was a favorite -- but those quips have been replaced by grim prognoses on his health. On Sunday, he pointed out numerous times that he's not himself, that the medication has worn him down, which was already clear after speaking to him for a few minutes.

Normally, he tends to ramble, as adept storytellers are prone to do, but now the jovial inflections are gone. His stories trail off or he abruptly changes subjects, the story arc muddied in his mind.

"Lots of pain all the time," he said. "I don't know why I'm suffering for so many months. ... Everything is struggling."

After his November cancer diagnosis, he had surgery to remove a tumor but soon learned the cancer had metastasized.

"We thought he had more time, and unfortunately after the PET scan, the cancer is all over the place," his daughter said.

The financial and emotional toll

A couple of days after Christmas, Zanis told CNN he was worn out and would be handing over his cross ministry to Lutheran Church Charities. His final trip was to Saugus High School in Santa Clarita, a city north of Los Angeles, where he delivered two crosses.

"I am tired," he said at the time. "I suffer a lot when I do (the crosses). It's very hard on me. I had the weight of the world on my shoulders."

He didn't mention cancer or being sick.

In fact, he was looking forward to teaching the charity's staffers to build the crosses -- as well as to a personal project: restoring a shot-up 1927 Cadillac Imperial stretch limousine that once belonged to a Chicago gangster, he said.

His plan was to begin working on the car after retiring, but the crosses occupied most of his life in retirement.

They also drained his family's savings. For 23 years, he built the crosses -- along with stars of David for Jewish victims and crescent moons for Muslims -- by hand.

"The whole country is made in the image of God," he'd say.

He'd load them into the bed of his pickup, drive them to the latest calamity -- to Columbine, Colorado, to Parkland, Florida, to Las Vegas, Nevada -- and spend hours erecting them before driving home. About 21,000 of the white crosses, he estimates, were for shooting victims. The rest were for victims of tornadoes, wildfires, plane crashes and other disasters.

In August, when CNN accompanied him on a portion of his journey from El Paso, Texas, to Dayton, Ohio -- the first time he'd needed to travel from one mass shooting directly to another -- he had driven more than 3,000 miles, and he still had to drive home to Aurora.

Crosses for Losses received donations over the years, but when funds came up short, Zanis picked up the tab.

Susie Zanis has set up a GoFundMe, and while she has secured enough money to pay off her father's debts and cover his impending funeral arrangements, she is leaving the fundraiser open to provide for her mother. Greg Zanis is also looking to sell the 1927 Cadillac, which he never got a chance to fully restore, he said.

Zanis had his memoir published this month. "The Cross Man," which he wrote with the help of an English teacher from nearby Geneva High School, chronicles his upbringing and plots his journey from a pot-smoking hippie who drove his Pontiac Trans Am way too fast to the man the world knows today.

"I just felt like doing it. If I don't do it right now, nobody'll get it done," he said, staying on brand even when ill.

Susie Zanis hopes proceeds from the book can help with the family's finances, she said.

Asked if her father's cross legacy was to blame for the late cancer diagnosis, Susie Zanis brushed off the notion.

Delivering crosses was healing for her father, she said, and "he doesn't believe in going to the doctor." He hates needles and is reluctant to visit a physician for anything more than getting his blood pressure checked, she said.

Yet his legacy is bittersweet in her mind. Not only did the ministry leave her family strapped, but it also left her mother without her husband and her and her siblings without their father for enormous stretches of time.

When her dad would set off on his next mission, she wanted to support him -- the whole family did -- but she couldn't help but think, "We need you here, too."

Seeking the upside to cancer would be problematic for even the most optimistic person, but Greg Zanis has been feeling the love since falling ill.

He's always said he was building the crosses for himself -- he's grieved over the losses of a father-in-law and daughter who were gone too soon -- and for the suffering families. But those reaching out these days remind him he helped myriad people grieve and come together during the country's worst episodes.