If you are not vaccinated against Covid-19, you shouldn't go into a bar or restaurant, expert says 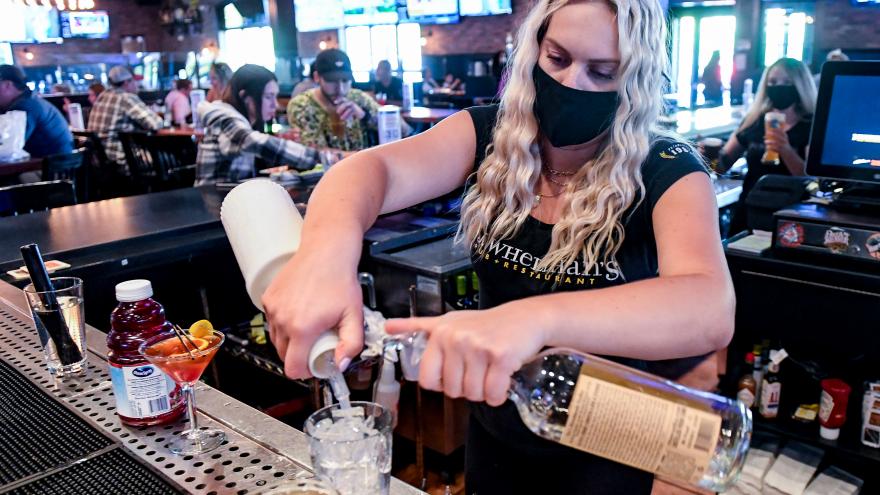 (CNN) -- Less than half of the US population is fully vaccinated against Covid-19 -- and with cases on the rise, experts are urging a return to precautions reminiscent of the earlier days of the pandemic.

"What I would say bluntly is: If you are not vaccinated right now in the United States, you should not go into a bar, you should probably not eat at a restaurant. You are at great risk of becoming infected," CNN Medical Analyst Dr. Jonathan Reiner, professor of medicine and surgery at George Washington University, told CNN's Fredricka Whitfield.

And hospitals are filling up with Covid-19 patients again, except now, patients are younger than before, said doctors in Alabama, Mississippi, Florida and Missouri.

Despite the encouragement of many officials and experts' warnings that the best protection from the virus comes from vaccinations, only 49.1% of the US population is vaccinated, according to data from the US Centers for Disease Control and Prevention.

If a large swath of people remains resistant to vaccination, Reiner said, the US is left with two options to control the spread: shut down businesses -- which few people want to do -- or return to masks.

"The only way to get the unvaccinated to mask up is to mask everyone up," Reiner said.

While masking, like vaccination, could come from mandates by state leaders, Vanderbilt University Medical Center Professor of Infectious Diseases Dr. William Schaffner said he anticipates more success if the push to return to precautions comes from local officials and trusted community leaders.

And for those who say vaccination is a personal choice, Schaffner said, they are half-right.

"This is a little like driving on the red light. Yes, that's your decision, puts you in danger, but endangers others also," Schaffner said.

Part of the urgency to control spread and implement precautions is due to the prevalence of the Delta variant, which is believed to be more transmissible than other strains of the virus.

"At the beginning of the pandemic, the CDC said that a close contact was somebody that you're indoors with, unmasked for 15 minutes or more," Dr. Celine Gounder, who served on President Joe Biden's transition Covid-19 advisory board, said in an interview with STAT published Friday. "The equivalent of that with the Delta variant is not 15 minutes, it's one second."

That means people might need to do more than one thing to protect themselves from the more transmissible variant, said Gounder, an infectious diseases specialist at NYU's Grossman School of Medicine.

In addition to vaccination, "Some of the other layers that we should consider would be masking indoors when you're outside of your household bubble, optimizing ventilation in the home -- just opening your window works really well," she said.

People should think in terms of how much virus there is in the air, plus how long they might be in contact with that virus-laden air.

"So if you're indoors, there's not a lot of air dilution unless you're opening up windows and doing that sort of thing. When you're outdoors, it's almost infinitely diluted. And so outdoors, your risk is really low," Gounder said.

As the Delta variant spreads, rates of infections and hospitalizations are on the rise.

In California, San Diego and Los Angeles counties both reported their highest number of cases since February, and hospitalizations in LA County have more than doubled in two weeks. On Sunday, officials there said hospitalizations surpassed 700 for the first time since March.

Florida reported an average of 10,452 new cases each day over the past week -- more than triple the daily average from two weeks ago, according to data from Johns Hopkins University.

Over the past week, Florida accounted for nearly a quarter of all cases in the United States -- more than any other state.

And Louisiana now has the highest increase in cases per capita in the US, state officials said Friday.

"We know that more than 80% of these are the Delta variant -- that is what's causing this surge," Gov. John Bel Edwards said.

"And what's enabling the surge is a very low percentage of people who have been vaccinated."

As experts push for vaccine mandates, one governor says he won't do it

As the number of Covid-19 cases surges in the United States, more than 50 health care groups -- including the American Medical Association, the American College of Physicians, the American Academy of Pediatrics and the American Public Health Association -- issued a joint statement on Monday calling for all health care and long-term care employers to mandate employees be vaccinated against Covid-19.

"Our health care organizations and societies advocate that all health care and long-term care employers require their workers to receive the COVID-19 vaccine. This is the logical fulfillment of the ethical commitment of all health care workers to put patients as well as residents of long-term care facilities first and take all steps necessary to ensure their health and well-being," they wrote in the joint statement.

Vaccination rates would likely go up, Reiner and Schaffner said, if employers and schools required vaccines.

Former US Surgeon General Jerome Adams said the same, but added that it likely won't happen until the vaccines gain full approval by the US Food and Drug Administration.

Each vaccine available in the United States has been authorized by the FDA for emergency use, but they have yet to be fully approved.

And the lack of full-fledged approval is contributing to vaccine hesitancy, Adams said.

Asked Sunday if vaccine mandates should be on the table, White House coronavirus coordinator Jeffrey Zients told CNN that municipal governments and businesses should consider any strategy that would make it safe to enter their facilities, whether that's requiring vaccines or negative Covid-19 tests.

But he wants the FDA to take its time to thoroughly review the applications for approval, so the public knows the agency wasn't "bowing to political pressure."

Zients is hopeful some approval will come sometime in August or September. President Biden last week said full approval could come before the end of August.

Pfizer/BioNTech and Moderna have started their applications for full FDA approval, while Johnson & Johnson has said it intends to file for licensure.

In Arkansas, where vaccination rates are particularly low, Gov. Asa Hutchinson said he will not mandate vaccines.

Arkansas reported 11,748 new cases and 56 new deaths this past week with a positivity rating of 19.32% according to the Johns Hopkins Coronavirus Resource Center. About 36% of Arkansas residents are fully vaccinated, the site reported.

Hutchinson said requiring inoculation could "cause a greater reaction of negativity toward the government, and then imposition on freedom."