If US had started social distancing a week earlier, about 36,000 fewer people would have died, study says 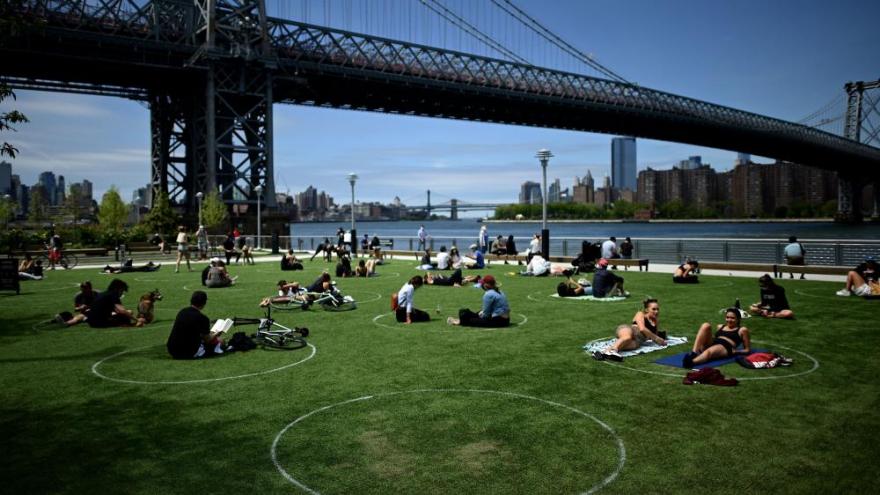 People are seen practicing social distancing in white circles in Domino Park, during the Covid-19 pandemic on May 17, 2020 the in Brooklyn borough of New York City

(CNN) -- If the United States had started social distancing just a week earlier, it could have prevented the loss of at least 36,000 lives to the coronavirus, according to new research.

As of Thursday, the outbreak's death toll across the country has risen to 93,439. At least 1,551,853 cases of the disease have been recorded, according to data from Johns Hopkins University.

Researchers at Columbia University built a model that depicts the transmission of the virus throughout the US using epidemiological modeling to gauge transmission rates from March 15 to May 3, lead researcher and epidemiologist Jeffery Shaman told CNN's Don Lemon.

If the country had locked down two weeks earlier than it did, it could have prevented 84% of deaths and 82% of cases, according to the research.

In the New York metro area alone, 17,500 fewer people would have died if the US had acted one week earlier, Shaman said.

"I wish we had the testing that would have told us what was going on," New York City Mayor Bill de Blasio said Thursday. "Right now, we're not sure when this disease started to be present in the city. We thought it was March, and now more and more it looks like it was February or even late January and we just didn't have the testing to give us the big picture."

March 1 was the first reported case in the city and 13 days later, the first death was reported.

"Our findings underscore the importance of early intervention and aggressive response in controlling the Covid-19 pandemic," the researchers wrote in the report.

Their research has not been reviewed by other experts at this time.

"If we were to walk it back just one week and follow the exact same pattern in each individual county what are the changes that we see in number of cases and death," Shaman said. "So it's an exercise to see what if we had done exactly what we had done but just transposed one week earlier."

The research team acknowledged that they couldn't account for how people would have responded if social distancing policies had been put in place earlier.

"During the initial growth of a pandemic, infections increase exponentially," the research said. "As a consequence, early intervention and fast response are critical."

With all 50 states in some stage of reopening, if local leaders see a growth in new cases, they should respond quickly to avoid a stronger rebound of infections and death, according to the Columbia researchers.