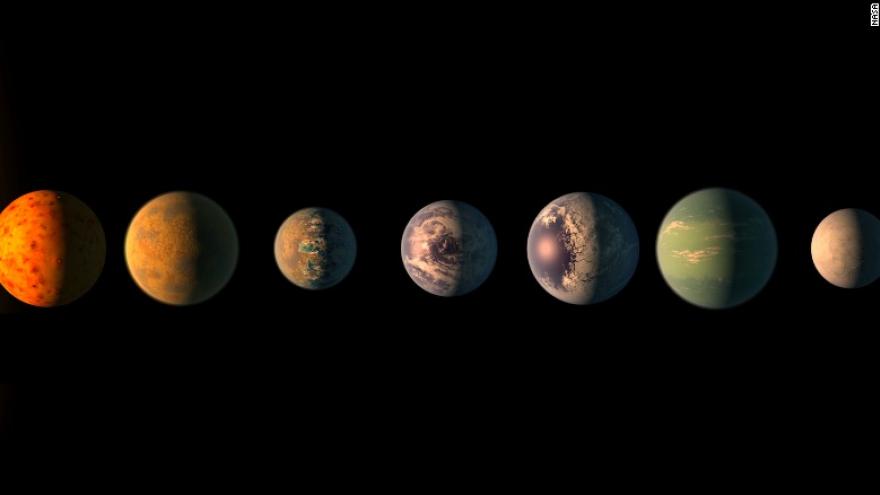 Over the next decade, scientists aim to unlock the secrets of the universe and identify Earth-like planets outside of our solar system to find other habitable worlds. Ultimately, this research could reveal if we truly are alone.

These are the top priorities outlined in the highly anticipated Astro2020 decadal survey, published Thursday by the National Academies of Sciences, Engineering and Medicine.

More about what happened right after the birth of the universe, the nature of black holes and neutron stars, and understanding how galaxies originated and evolve are also on the survey's agenda.

The past 10 years have been filled with trailblazing scientific discoveries, including gravitational waves, direct imaging of exoplanets and a black hole, and even the detection of heavy elements created when two neutron stars collided. Much of the 2010 decadal survey has been fulfilled, so scientists agree that it's time to look ahead at what's possible using space and ground-based astronomy to study the universe.

"Many of the questions at the forefront of the survey's themes could not have been framed even a decade ago," the authors wrote in the report.

More than 4,000 exoplanets have been found in our galaxy, but it's less apparent which of those worlds are potentially habitable. The quest continues to find worlds similar to Earth. The authors reinforce the idea of being able to image and better characterize these potentially habitable planets.

Multi-messenger astronomy, or the combination of observations from space and ground-based telescopes in multiple wavelengths of light, was a key factor in some of the biggest discoveries of the past decade. In order to better understand black holes and neutron stars, including the explosive events that create them, the report suggests delving deeper into studying gravitational waves. These ripples in space-time could reveal what happened right after the big bang that created the universe.

Our universe is filled with galaxies, but how did they form and evolve over time? The authors suggest that the answers could be within the cosmic webs of gas that act as the foundation of galaxies and eventually leads to the birth of stars filling each galaxy.

The authors of the report recommend that NASA create a way to develop large strategic missions that feed into the goals of the survey. These missions would be developed under a new Great Observatories Mission and Technology Maturation Program.

The first mission after this program is developed would be a large, high-contrast telescope that can observe in infrared, optical and ultraviolet light. It would be comparable in scale to Hubble Space Telescope or the James Webb Space Telescope and could launch in the 2040s to aid in the search for signatures of life on about 25 potentially habitable exoplanets. The estimated cost for this mission is $11 billion.

"If we do discover the signature of life in another planetary system, it will change our place in the universe in a way not seen since the days of Copernicus — placing Earth among a community and continuum of worlds," the authors wrote. "The coming decades will set humanity down a path to determine whether we are alone."

The future of discovery

Due to the pandemic, the report, called Pathways to Discovery in Astronomy and Astrophysics for the 2020s, was delayed from being released last year. Agencies like NASA and the National Science Foundation rely on these recommendations when making decisions regarding funding research, missions and programs for the next 10 years. It's the result of years of work by the astronomical community and acts as an outlook for the years 2023 through 2032.

"This report sets an ambitious, inspirational, and aspirational vision for the coming decade of astronomy and astrophysics," said Fiona Harrison, chair of the division of physics, mathematics, and astronomy at the California Institute of Technology, and co-chair of the National Academies' steering committee for the survey, in a statement.

"In changing how we plan for the most ambitious strategic space projects, we can develop a broad portfolio of missions to pursue visionary goals, such as searching for life on planets orbiting stars in our galactic neighborhood — and at the same time exploit the richness of 21st century astrophysics through a panchromatic fleet."

But the report isn't just a future vision for the science that has become possible in this golden age of discovery and technology. The authors also focus on how to improve program funding and conditions for the people who work in these fields, conduct the research and make such groundbreaking discoveries possible.

"We stand on the threshold of new endeavors and scientific capabilities that could transform our understanding of how galaxies form and how our universe began," said Robert Kennicutt, professor at The University of Arizona, professor of physics and astronomy at Texas A&M University, and steering committee co-chair, in a statement.

"But our report says serious attention also needs to be paid to investments in the foundations of this research — including in the people who carry it out — and in ensuring that the U.S. community is well equipped to capitalize on the wealth of information that will keep it on the cutting edge of the worldwide endeavor to understand the cosmos."

What needs to change

The report called out a need to diversify the scientific workforce and ensure that policies are in place at NASA, NSF and the US Department of Energy to make sure that harassment and discrimination are treated as forms of "scientific misconduct."

While more women have joined these fields, there is still a need for them in top leadership positions. Racial and ethnic diversity remains low among astronomy faculty, with Blacks at just 1% and Hispanics at 3%.

Some observatories have also been built on land where Indigenous communities maintain a cultural stake. The authors suggest respecting, empowering and benefiting local communities by building partnerships and creating pathways for Native Americans to begin science careers.

The report also noted the impact of travel on climate change, saying the "astronomy community should increase the use of remote observing, hybrid conferences and remote conferences."

The survey committee agreed with NASA that the agency should discontinue operations of SOFIA, or the Stratospheric Observatory for Infrared Astronomy, in 2023. The modified Boeing 747 carries a 2.7-meter (106-inch) reflecting telescope and flies into the stratosphere. While the unique aircraft has led to some interesting scientific discoveries, the authors didn't think the mission was worth the cost to continue it.

The growing concern over the frequent launches of megaconstellations of satellites is also addressed in the report.

"Scientifically the greatest impact is on searches for Near Earth Objects," the authors wrote. "The National Science Foundation should work with the appropriate federal regulatory agencies to develop and implement a regulatory framework to control the impacts of satellite constellations on astronomy and on the human experience of the night sky."