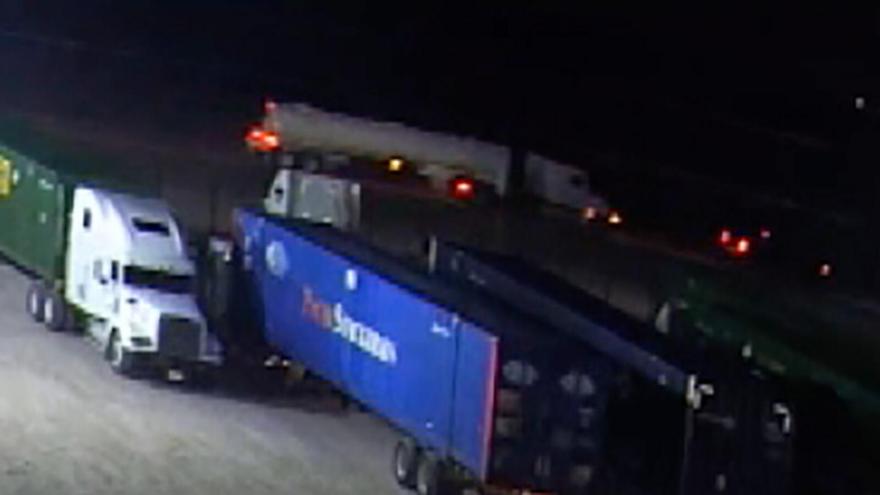 The white tanker truck can be seen at the top of this image from surveillance videos given to CNN by the sheriff's office.

(CNN) -- Authorities looking into a suspected human smuggling event after panicked callers to 911 reported being inside a tanker trailer in Texas have taken one person into custody.

According to a statement from a US Immigration and Customs Enforcement spokesperson, "One individual has been taken into custody in relation to the alleged incident."

How the person was related to the situation was not made known.

"The investigation is still ongoing as agents are following up on leads to further the case and ensure the safety of the individuals. No additional information can be provided at this time," the spokesperson said.

The strange and disturbing case began Monday at 11:58 p.m. CT when a man speaking Spanish called 911 and said he was inside of a tanker trailer carrying 80 smuggled migrants to San Antonio, Bexar County Sheriff's Office Deputy Johnny Garcia told CNN.

"(The caller) makes mention of it's hard to breathe," Garcia said. "There's other individuals heard in the background gasping for air."

Garcia said the 911 operator could hear cars passing by and the caller indicated the truck was stopped.

In a 911 call provided to CNN by the sheriff's office a man can be heard saying, "I need help" and "We're dying."

He then says in Spanish, "We need help. Fast. We don't know where we are. We don't know. We're in the back of a trailer. We're on a road headed to San Antonio," before saying, "We're inside a water tank trailer."

The 911 call dropped after the caller said there are 80 people in the trailer. On the recording, the operator then tells the 911 translator she was unable to ping him back.

They were also unable to make contact with the cell phone number again, Garcia said.

Investigators were able to track the 911 call signal to a cell tower close to a truck yard along I-35 on the outskirts of San Antonio, but could not locate the truck when they arrived, Garcia told CNN.

Two surveillance videos given to CNN by the sheriff's office show the arrival and departure of a white cab with a tanker trailer on the highway in front of the truck yard.

In the first video, the white truck is following a dark pickup when they stop and park on the side of the road. The time stamp on the recording is about 39 minutes before the 911 calls.

The second video shows the tanker trailer begin to move forward at about 12:05 a.m. when it pauses and the dark pickup drives past it on the highway access road. The driver of the white truck waits a few more seconds then drives out of frame.

The dark pickup, which was "traveling in tandem" with the tanker trailer, has also not been located, according to Garcia.

"It's just suspicious that that tanker was being accompanied by that vehicle," Garcia explained. "Obviously from past incidents, typically in situations like this human smuggling, they are typically accompanied by a follow vehicle. We believe that was the case here."

Garcia said no police report is available as the investigation was turned over to San Antonio police because the truck yard is in their jurisdiction.