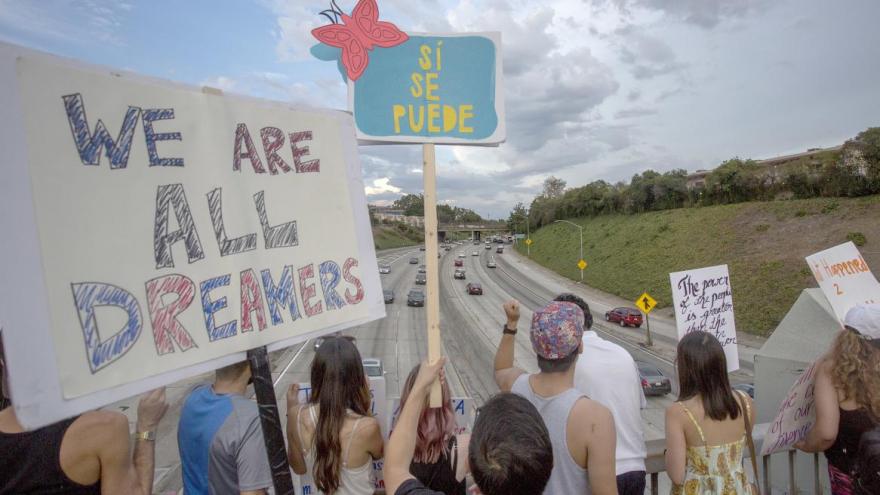 The Trump administration is moving to deport members of the very group that seemed until a few years ago the most protected: DACA recipients.

(CNN) -- The letter this fall from Immigrations and Customs Enforcement turned Zoila Pelayo's life on end. Stunned, she read that the agency was filing to reopen a deportation case against her that had been closed nearly eight years ago.

Pelayo, 33, lives with her husband and two young children in Tucson, Arizona. Her parents brought her there from Mexico without documentation when she was 6. As a "Dreamer" who has been shielded from deportation since 2012 under the Deferred Action for Childhood Arrivals program, and who has stayed out of trouble with the law, Pelayo believed she was safe.

Pelayo isn't the only one facing that question. Now, in an escalation of its pursuit of undocumented immigrants, the Trump administration is moving to deport members of the very group that seemed until a few years ago the most protected: DACA recipients.

ICE has begun asking immigration courts to reopen administratively closed deportation cases against DACA recipients who continue to have no criminal record, or only a minor record. Immigration attorneys in Arizona confirmed at least 14 such cases being reopened since October, and CNN also found DACA recipients whose cases recently were reopened in Nevada and Missouri.

Administratively closing a case removes it from the court calendar, in effect putting it on hold indefinitely. Immigration courts are part of the Department of Justice, unlike civil or criminal courts.

The move to reopen deportation cases against Dreamers comes as the US Supreme Court considers whether to let the Trump administration end the program — and during oral arguments in November, at least some justices made it clear that they were accepting the president's assurances that ending DACA would not mean deporting Dreamers.

But immigration attorneys say the cases they are now seeing reopened show how ICE is preparing to deport DACA recipients if the Supreme Court ruling terminates the program.

It has long been the case that Dreamers who are charged with or convicted of a serious crime risk losing DACA status and being deported, since applicants had to have no felonies, significant misdemeanors, or three or more other misdemeanors to qualify for deferred action in the first place.

Cases began being reopened in October

But immigration attorneys say these cases are different.

"It wasn't until October that DHS (Department of Homeland Security) started to reopen the DACA cases," Tucson attorney Jesse Evans-Schroeder wrote in an email to CNN. She said five of her DACA clients saw their cases reopened in October or November.

"The cases have happened in a bunch," said Selma Taljanovic, another Tucson-based attorney. "The examples I have had not had anything bad happen, no contact with law enforcement." She said she's had four cases reopened in the past month and a half.

"The ones I'm seeing re-calendared are people who kept their noses clean and maintained their DACA status. There's no reason to put them back before an immigration judge other than mean-spiritedness," said Mo Goldman, a Tucson immigration attorney who said he represents three Dreamer clients, including Pelayo, in that situation. He said when he received two notices from ICE in two days, in October, "I contacted the office of chief counsel at ICE, to see — they're the ones who file these motions — to see if it was an error. The response was, that it was not and that they are re-calendaring people with DACA."

In a statement provided by spokeswoman Paige Hughes, ICE said that it is required under Session's May 2018 decision "to reopen approximately 350,000 administratively closed cases so they are litigated to completion," and the applicant is ordered removed or obtains relief. ICE did not break down how many of the 350,000 administratively closed cases involve DACA recipients versus other people who are simply a low priority for deportation, but Hughes said there is no stipulation that would exempt DACA recipients.

Pelayo's case is typical. Eight years ago, she was stopped by an Arizona state trooper for a broken taillight and found to be driving without a license. (At the time, Arizona didn't allow any undocumented immigrants to apply for a driver's license. Since January 2019, DACA holders can receive licenses.) She was turned over to ICE.

After a month in immigration detention, she was released pending deportation proceedings. In May 2012, with ICE's consent, an immigration judge administratively closed Pelayo's case, removing it from the court calendar. That October, she successfully applied for DACA, a few months after the program began.

Now the prospect of deportation consumes her thoughts. Her parents are from Guadalajara, Mexico. But, she says, "I don't know Guadalajara; I don't have any family there. All my family are here."

In Kansas City, Missouri, attorney Genevra Alberti said she was surprised last April when ICE reopened the deportation case against one of her DACA clients, Marco Avilez Gutierrez.

"He got re-calendared after he didn't file his renewal immediately. His prior DACA expired but he had no new criminal issues. He's also intellectually disabled, so it's an especially egregious situation," she said.

In Las Vegas, attorney Peter Ashman is representing a DACA recipient who he said was mistakenly arrested for car theft. "But they admitted it was a mistake ... it didn't even get to court, it was dismissed" by the district attorney's office, Ashman said.

Nevertheless, the arrest led ICE to reopen his case for removal, he said.

"They said they're not going to deport him, but they want a deportation order. It makes no sense," Ashman said. "The government is trying to deport him in spite of the fact he has DACA."

Ashman said he has appealed the deportation order to the Board of Immigration Appeals at the Justice Department. If his client loses there, Ashman said he'll appeal to the US Ninth Circuit Court of Appeals in San Francisco.

The fate of the DACA program is expected to be decided no later than next June, when the Supreme Court issues rulings on the cases it hears this session. Several immigration attorneys said that if Roberts or other justices are deliberating based on the notion that Trump won't deport Dreamers, they're mistaken.

"The bottom line is that they [ICE] are teeing these young people up to have final removal orders, and to be removed from the US as soon as DACA is eliminated," said Evans-Schroeder, the Tucson immigration attorney.

In a statement, ICE responded that Sessions' 2018 order determined that immigration judges "do not have the general authority to suspend indefinitely immigration proceedings by administrative closure," and that such cases must be resolved one way or another.