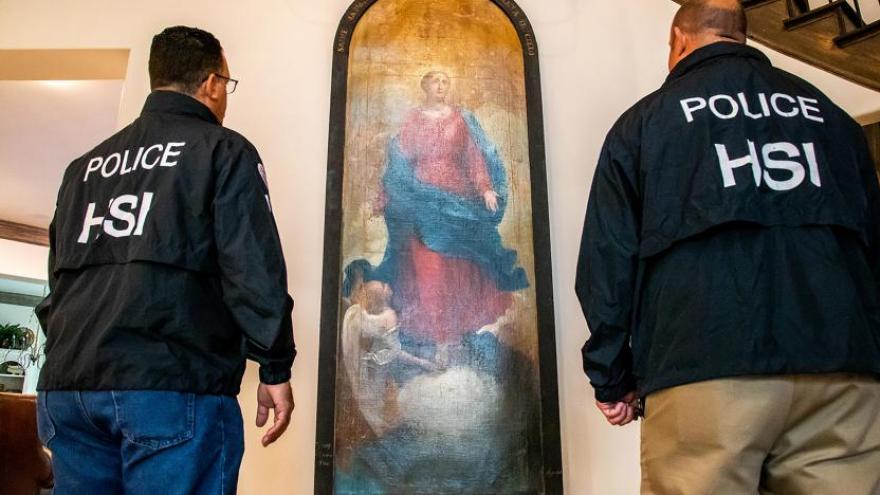 (CNN) -- Stolen almost two decades ago from an ancient abbey in northeastern Italy, a trafficked 19th century art piece is making its way back home.

The US Immigration and Customs Enforcement agency recovered a 19th century painting Wednesday looted from the Abbey of Santa Maria in Sylvis in Sesto al Reghena, Italy, in 2002, officials said in a statement.

The stolen artwork, titled "the Assumption of the Virgin Mary," was painted by Italian artist Giuseppe Pappini in August 1851.

ICE's Homeland Security Investigations (HSI) in Dallas was able to track down the painting after receiving a lead from the HSI Attaché Office in Rome, Italy, in 2019 according to the statement. The agents, specially trained in investigating the theft and trafficking of cultural heritage and art, traced the piece to a Dallas-area private art collector who bought the art from a dealer in 2015. The dealer had no knowledge that the piece was stolen, the statement said.

Upon learning that the painting was taken illegally, the collector willingly released it to HSI to be returned to its rightful owner in Italy, the statement said.

"Investigating the loss or looting of cultural heritage properties and returning them to their countries of origin is an important part of HSI's diverse mission," said Ryan L. Spradlin, special agent in charge of HSI Dallas.

"Our specially trained investigators and attachés in more than 40 countries not only partner with governments, agencies and experts who share our mission to protect these items, but they train the investigators of other nations and agencies on how to find, authenticate and enforce the law to recover these items when they emerge in the marketplace."