ICE chief to depart immigration agency with no clear replacement 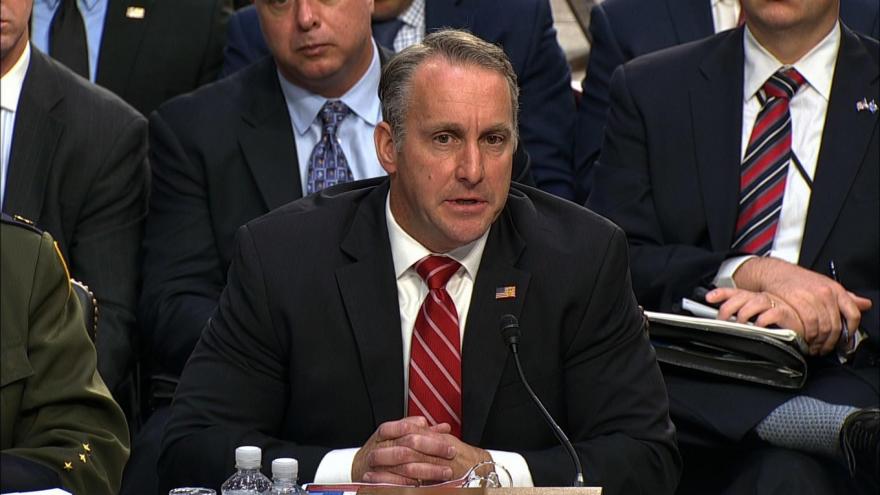 Immigration and Customs Enforcement acting Director Matt Albence, seen here during a Senate Judiciary Committee hearing, is retiring from the agency he has led since last year, according to a Department of Homeland Security official.

(CNN) -- Immigration and Customs Enforcement acting Director Matt Albence is retiring from the agency he has led since last year.

It's unclear who will replace Albence when he departs at the end of August.

"This was an exceptionally hard decision to make, a decision prolonged due to the uncertainty of a global pandemic and the essential role ICE continues to play in our nation's response," Albence said in a statement Friday.

"Over the next month, I will work alongside DHS and ICE leadership to ensure a smooth transition."

A longtime career law enforcement official, Albence has filled the top spot at the agency multiple times during the Trump administration as leadership at ICE -- an agency under DHS -- has shifted.

He also briefly led the agency last year amid a department-wide leadership shake-up that included the forced resignation of then-Homeland Security Secretary Kirstjen Nielsen and sudden withdrawal of Ron Vitiello's nomination to the role.

Albence's move into the director role often put him at the center of President Donald Trump's key campaign issue and left him defending an agency that is often criticized for its role in immigration enforcement.

Most recently, the agency came under fire for issuing guidance that would have barred international students from staying in the US if they take only online courses. The agency rescinded the policy after a series of lawsuits and outrage from universities, which have gradually moved to online-only courses due to the coronavirus pandemic.

Albence has worked in federal immigration enforcement since 1994, when he began as a special agent with the former US Immigration and Naturalization Service.

Before serving as acting director, Albence led ICE's Enforcement and Removal Operations, which is responsible for identifying, arresting and deporting undocumented immigrants.

Before he succeeded Morgan, Albence assumed the role of acting agency head in April 2019, after Vitiello's nomination to lead ICE was abruptly withdrawn the week prior.

Trump told reporters at the time that the administration intended to go "in a little different direction." He added: "Ron's a good man but we're going in a tougher direction."

Albence echoed Trump's hardline stances on several key immigration issues. He made headlines in 2018 when, as the head of ICE's Enforcement and Removal Operations, he said family detention centers were "more like summer camp" than a jail during a congressional hearing on the administration's efforts to reunite thousands of immigrant families who had been separated as a result of its "zero tolerance" policy.

Later, in September 2018, he doubled down on his characterization of the detention centers but declined to answer whether he'd send his own children there.

"The point is, the parent made the illegal entry," Albence said. "The parent put themselves in this position."

He was also an ardent critic of "sanctuary cities," a broad term applied to jurisdictions that have policies in place designed to limit cooperation with or involvement in federal immigration enforcement actions.

But Albence didn't embrace every controversial immigration policy of the administration. During a hearing last October, he appeared to distance himself from a decision by US Citizenship and Immigration Services to end a policy that allowed undocumented immigrants with serious medical conditions to remain in the United States while they received care. The agency has since reinstated the policy.

Albence repeatedly reminded the House panel that his agency was not involved in the process and said he had been blindsided by the move. He noted during his testimony that there had been discussions about the policy over the years but the ultimate decision was made by USCIS.

"To continue to suggest that ICE had some role in this process is not only inaccurate, as confirmed by the information already provided to this committee, but also irresponsible," Albence said at the time.

This story has been updated with a statement from Albence on his retirement.