I went to fashion week in the metaverse 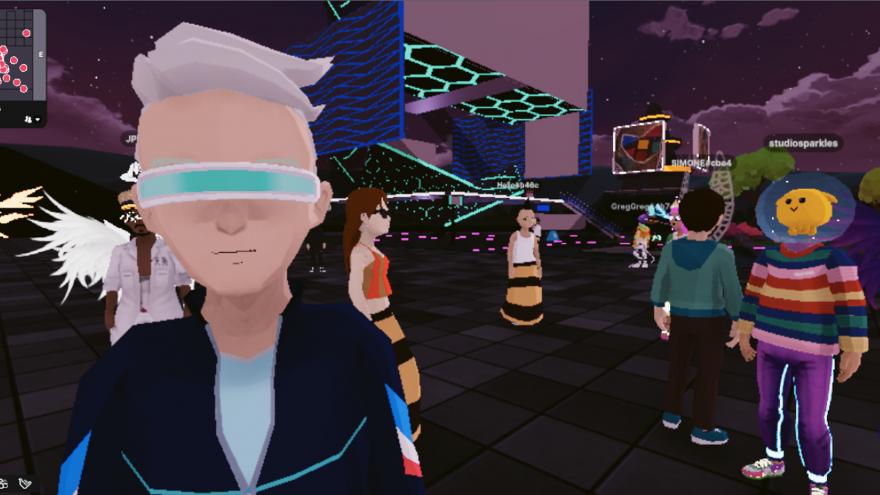 (CNN) -- The day before covering a fashion week in virtual reality felt much like the day before any industry event, only instead of renting outfits and planning travel routes, I was downloading Google Chrome extensions and over-thinking the creation of my digital avatar. (I played it safe in the end, pairing my natural hair and eye color with a cute nautical-inspired top and one raised eyebrow for a permanently skeptical expression.)

I was preparing to attend a week-long virtual fashion event in the metaverse: a network of unique digital worlds that has grabbed the fashion world's attention. Industry title The Business of Fashion has projected it will be the "next goldmine," as young consumers continue to tunnel deeper into virtual reality (81% of Gen-Z played video games in the past six months, according to the title's "State of Fashion" report which also recorded the younger generation already spends an average of 7.3 hours per week in virtual worlds).

While fashion shows have already been staged in the metaverse (designers such as Mimi Wade, Mowalola and Collina Strada have shown individual collections on the virtual platform IMVU), the event, which began on March 24, hosted by online platform Decentraland, included a packed schedule of catwalks from the likes of Dolce & Gabbana and Philipp Plein, fire-side chats with Tommy Hilfiger himself and even a virtual performance by Grimes, setting it apart as an all-encompassing event experience. It's likely to become an annual tradition, said Sam Hamiliton, creative director of Decentraland Foundation during a Zoom call. "There's still a lot of moving parts, which I think is kind of traditional, but I feel confident," he told CNN ahead of the event's opening. "Behind the scenes, it's a virtual version of a real fashion week. There's still people sewing backstage, if you like, in 3D software."

But the final experience was far from seamless -- technical difficulties, overheating hard drives and lack-luster graphics dimmed the fantasy of this supposedly limitless landscape.

To enter the metaverse, you first need to verify yourself. One option (the only option that worked for me and my decade-old MacBook Air) is by linking your mobile crypto wallet. My decidedly empty crypto wallet appeared in the corner of my screen for the entire session -- something of a dampener on the aspirational nature of fashion.

But who would spend their cold hard cash in this bizarre digital clubhouse, anyway? Every avatar is allotted at least 30 garments they can wear for free, and even a handful of quirky accessories like sunglasses or tiaras. A few digital t-shirts seemed to be more than enough creative expression for something as intangible as the metaverse. Or so I thought.

The first event I logged on for was the Dolce & Gabbana x UNXD catwalk show, where the Italian label debuted 20 metaverse wearable looks inside a venue that felt part-football stadium, part nightclub. It was one of the first shows of the week, and as the purple and black dance floor blinked away in silence (music patched in and out at random intervals) attendance seemed light with what appeared to be around 25 attendees. Some beamed in late -- literally, in a flash of electric blue light -- and missed the show entirely, while other avatars, often melded together due to glitchy graphics, stared blankly ahead. In the bottom left-hand corner of my screen was a running chat box feature that suggested some guests were still getting to grips with the technology. Before the event, a steady flow of sarcastic comments evidenced a cynical atmosphere. "Wow, this place is pumping," remarked one user. "How do I have fun here?" asked another.

Instead of using human avatars as models, Dolce & Gabbana interpreted the concept of a catwalk literally -- by sending giant, bipedal feline creatures down the circular runway. But the clothes -- if you could call the indistinguishable collection of pixels clothes -- paled in comparison to the inventive outfits of my fellow avatars. Splayed glowing falcon wings, neon changshans, gold chrome cyclops sunglasses and Tron-looking black leggings with electric blue panels; the metaverse dress code was futuristic chaos, and suddenly my freebie tiara wasn't cutting it. But kitting yourself out, even virtually, is an expensive endeavor. Printed bucket hats and puffer jackets, as well as a glowing winged tuxedo from notoriously ostentatious label Philipp Plein ranged anywhere from $1,670 to $2,740 a piece.

As well as a schedule of runway shows, Decentraland also built a luxury shopping district -- like a digital fifth avenue. Lavish storefronts by Elie Saab, Peter Dundas, D&G, Etro and South-American brand Chufy sat on an elegant, shrubbery-lined street. Here, the attention to detail was impressive, from the monogrammed awning extending from each window to the opulent architecture. For instance, suspended storks hung above the exterior of Chufy's digital flagship, which was then plastered in rainbows and Japanese Ukiyo-e art, including Katsushika Hokusai's "The Great Wave."

Inside the Peter Dundas store, a screen built into the back wall played the label's live action Pre-Fall 2022 campaign video. Cyber mannequins stood poised in pixelated versions of the looks shown on-screen. Users were supposed to be able to purchase the wearables to strut around Decentraland, but since no amount of clicking would allow me to try on these chic outfits it was more of a cold spectacle than a revolutionized shopping experience.

Elsewhere in the metaverse, Tommy Hilfiger, DKNY and Selfridges set up similar pop-up stores. Some, like Selfridges, built huge postmodern structures with multiple floors, while other stores looked more like facades or open showrooms, plastered with logos and campaign imagery. Each participating fashion house -- a hot ticket, according to Hamiliton, who said he was still turning down brands hours before the event kicked off -- was paired with a team of Decentraland 3D software designers who built the wearables on display.

After some window shopping I headed to the Philipp Plein afterparty, where around 70 to 90 players "emoted" -- that is to say, performed pre-programmed movements like blowing a kiss, angry hand gestures, raising one hand like an inquisitive student and several dance movements -- in front of a live streamed DJ set beamed from someone's living room.

This curious party was held in "Plein Plaza" -- a sparse digital space that includes the designer's ominous-looking $1.4 million cyber skyscraper. Across from the monogrammed tower is M.O.N.A -- Plein's underground Museum of NFT Art that showcases an exhibition of unreleased NFTs created by the designer and his collaborator and digital artist, Antoni Tudisco.

A future worth exploring

While other designers rented their retail space for the event, Plein purchased his plot of digital land in February. His decision speaks to the high hopes many have of metaverse fashion. But the experience has a long way to go if it's to become a shopping destination, rather than a gimmick.

Decentraland's event has been described as the first inclusive fashion week, offering a front-row seat to anyone with a crypto wallet (in reality, not that many). But it took two Mac computers and a Dell laptop for me to finally enter Decentraland -- and even then my sessions lasted 15 minutes at a time before crashing.

And while virtual fashion weeks can limit the likes of air travel and wasteful set builds for shows, there is also an environmental cost to virtual realms that rely heavily on sophisticated computer systems.

Glitches aside, the experience did offer a window into a fascinating future, worthy of exploration. The ambition behind Decentraland's first fashion week was cause for celebration. And if fashion is about newness and novelty, then the metaverse was the most en vogue venue in town. More than the billed designers, it was the other guests that brought an outpouring of creativity. It also demonstrated potential for other industries, too. Beauty brand Estée Lauder's giant rotating bottle of Advanced Repair night serum was a marketing sight to behold, and the digital photography exhibition "Unplanned Paths" at the cyber gallery "The Chockablock" was immersive enough to feel like a real alternative to in-person viewing.

But unless you're joining on a gaming PC (and even then, expect intense lagging), virtual fashions week may be as inaccessible as the real thing. For now.

Top image: A screenshot from the Philipp Plein afterparty on Decentraland.org