'I have never seen him eat a vegetable:' Trump braces for a beef-free menu in India 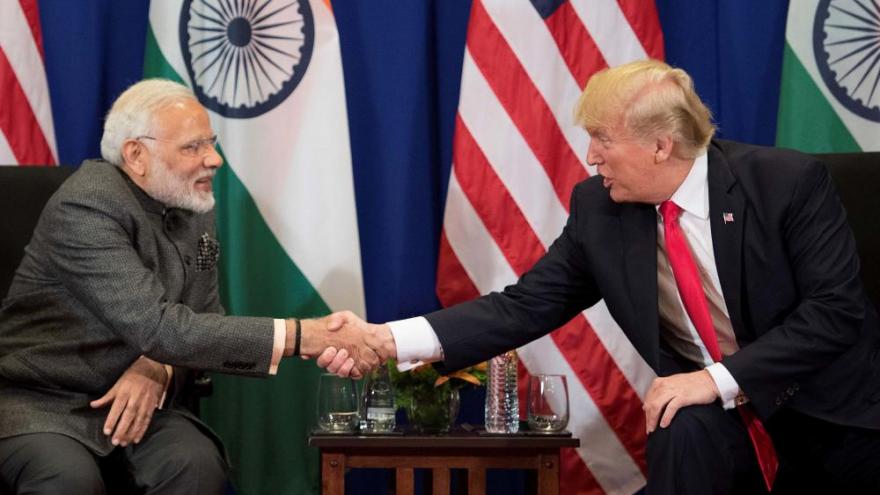 President Donald Trump, whose diet is often a rotation of steaks, burgers and meatloaf, faces a potential shock as he prepares to travel to three Indian cities this week. Trump's host, Prime Minister Narendra Modi, has gone out of his way to generate an elaborate reception for the President, including hosting a massive rally in the world's largest cricket stadium.

(CNN) -- When President Donald Trump travels abroad -- be it to Saudi Arabia or Singapore -- his hosts usually try make him feel at home with his favorite meal: steak with miniature bottles of ketchup on the side. But what's a beef-lover to do in India?

The President, whose diet is often a rotation of steaks, burgers and meatloaf, faces a potential shock as he prepares to travel to three Indian cities this week. His trip includes stops in Gujarat state, Agra and Delhi, where Hindus are the majority and cows are revered as sacred. In some neighborhoods, meat eating is so taboo that it's not done in public.

Trump's host, Prime Minister Narendra Modi, has gone out of his way to generate an elaborate reception for the President, including hosting a massive rally in the world's largest cricket stadium and arranging a tour of the Taj Mahal (the real one, not the namesake Atlantic City casino that Trump once owned).

But Modi is a devoted vegetarian and plans to serve vegetarian food to the President, according to people familiar with the planning. Trump will sit for several meals with Modi when he's in India, including a lunch and a formal banquet Tuesday evening at ornate Rashtrapati Bhavan, the official presidential palace in Delhi.

People familiar with the trip's planning cautioned that menus would likely only be finalized at the last minute. And Trump's aides have been known to intervene to ensure Trump's tastes are catered to when he's on the road (he once had steak twice in a day while abroad.)

A person close to the President who has dined with him on several occasions said Trump has salad with a meal every now and then -- but other than that, "I have never seen him eat a vegetable."

It won't be Trump's first time in India; the country houses the most Trump Organization properties outside the United States and he visited in his pre-White House capacity.

In the past, the countries Trump has visited often accommodate his diet, feeding him lamb or another alternative if steak is not on the menu. But several officials said it's hard to imagine Modi serving the President his usual fare.

"I don't know what he's going to do in this case. They don't serve cheeseburgers," a former official said of the situation.

Even one of the President's favorite fast food restaurants, McDonald's, doesn't serve beef in India. Instead, locals dine on chicken burgers or fried paneer cheese sandwiches.

If Modi's choice of food isn't quite Trump-like, the rest of his plans appear designed to appeal to the crowd-loving US leader. For the President who hosted three rallies of his own this week, Modi is crafting a grand spectacle. The "Namaste Modi" event in Ahmedabad is expected to draw hundreds of thousands of people -- a figure slightly lower than the 6 to 7 million Trump has predicted, but still his largest crowd on foreign soil.

In preparation, the city has begun constructing a wall that will obscure some of the city's slums from view of Trump's motorcade, though city officials have said its construction was pre-planned.

Trump will also tour the Taj Mahal -- a somewhat unusual stop for a President who rarely visits cultural sites abroad. Already, some locals have expressed concern that the troops of monkeys who live on or near the site could interrupt the President and first lady's tour.

The world-famous white mausoleum has some personal meaning: Trump's gold-and-neon casino in Atlantic City, New Jersey, was styled after it. Trump once deemed it the "Eighth Wonder of the World."

The carefully planned displays of bonhomie are meant to signal close ties between the two countries and their leaders as they haggle over trade, security and India's worrying slip away from secular democracy. Trump doesn't seem ready yet to strike a major trade deal and administration officials insist he will confront Modi over recent steps viewed as anti-Muslim.

Washington and Delhi have been seeking closer ties for years, and Modi worked to cultivate Trump's predecessor as well. Modi himself isn't immune to menu-related drama; when he visited the White House in 2014, he was midway through a strict religious fast. As other guests dined on goat cheese, halibut and mango crème brûlée, he sipped only warm water.

Trump and Modi have certain things in common, like an impulse toward nationalism and devoted masses of followers. But there are differences beneath the surface.

"They're not going on fishing trips when they're out of meetings," said Rick Rossow, the Wadhwani Chair in US-India policy studies at the Center for Strategic and International Studies in Washington. "The one thing that pulls them together is not as clear."

Trump has offered to mediate tensions between Pakistan and India over Kashmir, but he's barely been rebuffed by Modi, who says the issue should be resolved between the two countries directly. While other presidents have tended to focus on one country or the other for security or economic reasons, Trump has taken a more indifferent approach to the subcontinent.

If anything, his visit will leave an impression -- if only because Modi has orchestrated a welcome finely attuned to Trump's love of flattery.

"This is a loud and boisterous country, and that exactly in some ways really fits with the Trump style," said Tanvi Madan, a senior fellow at the Brookings Institution. "All American presidential visits to India are optic-heavy. In some ways, American presidents go to India to feel loved."

For Trump, the love is something of a prerequisite for leaving the White House. After some contentious visits to international summits left him feeling attacked by other world leaders, he told aides he preferred state visits where he's the guest of honor.

He's something of a reluctant traveler, having visited 23 countries since taking office on 18 separate trips. That's fewer than his predecessor Barack Obama, who'd visited 31 countries at this point in his presidency.

When Trump travels abroad, aides pay particular attention to the food he'll be served and any awkward scenarios he might encounter. A premium has been placed on avoiding snags that would bring the President outside his comfort zone -- including, according to one official involved, a mandate that familiar food be available during Trump's meals.

"No whole fish with the heads still on, nothing too spicy," is how one person involved in a trip early in Trump's presidency characterized the instructions for Trump.

Over the first three years of his tenure, Trump has gone from lengthy multi-stop foreign swings to more targeted jaunts that last only a few nights. He's only expected to spend one night in India and isn't scheduled to visit any other countries.

Trump has complained to aides in the past when he feels like he's on the road for too long or when he thinks his time is being wasted abroad. He's also griped about the pace of some foreign trips and he rarely sleeps aboard Air Force One, where staffers have complained about his penchant to stay awake even on long overnight journeys.

Aides and friends describe Trump as an impatient traveler, one who does not particularly relish experiencing foreign cultures and would prefer instead to be sleeping in his own bed. A hotelier by trade, Trump has on more than one occasion berated staff for lodging and food he deemed inadequate, according to people familiar with the matter.

This week he spent three nights away from the White House -- but insisted he stay at his Trump Hotel property in Las Vegas each night.