'I feel like I got to break that glass ceiling': Meet the first female Secret Service motorcycle officer 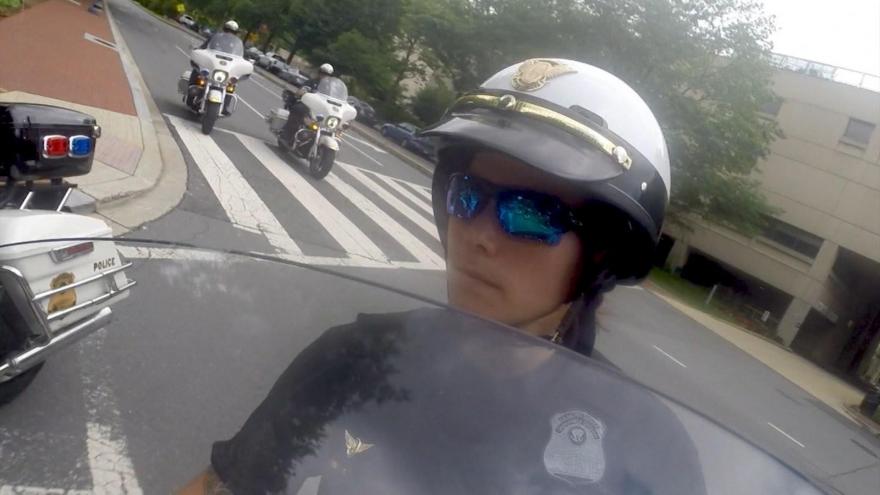 With her ponytail beneath her white helmet, her Sig Sauer .357 pistol on her side and her leather boots on, Officer Technician Alta "Lauren" Gunawan weaves in and out of traffic on her Harley Davidson, lights and sirens blaring as she clears the way for presidential motorcades as they traverse across the nation's capital.

(CNN) -- With her ponytail beneath her white helmet, her Sig Sauer .357 pistol on her side and her leather boots on, Officer Technician Alta "Lauren" Gunawan weaves in and out of traffic on her Harley Davidson, lights and sirens blaring as she clears the way for presidential motorcades as they traverse across the nation's capital.

It's a routine part of the job, but Gunawan's presence is unprecedented: she's the first woman to serve in the Motorcade Support Unit.

Gunawan is one of the newest members of the elite 14-person unit, which falls under the Uniformed Division of the Secret Service. The agency is made up of just over 7,000 special agents, officers and specialists who provide protection to the President, vice president and foreign dignitaries in addition to investigating financial crime.

Commonly referred to as "motors" by the Secret Service, the unit is responsible for spontaneously stopping traffic under pressure as the motorcade approaches in order for the protectee to safely pass.

Gunawan, 30, grew up in the 400-person town of Neponset, Illinois, one of three kids. She said she fell in love with motorcycles at the age of 18.

"I was in college. My friends all had bikes and I wanted to be a part of that group," Gunawan told CNN. "I went ahead and I took that leap, took the safety course ... started falling in love with it. The freedom that I get riding is, you can't compare it to anything else."

Gunawan said she's always loved policing because of her grandfather, an auxiliary police chief back in Illinois. "I've always wanted to give back to my community and be able to make my grandfather proud," she said.

And it was her love of motorcycles and her sense of adrenaline that pushed her to go further with the Secret Service. "I don't have to go sit at a 9 to 5 job. It's different every single day. I never know what the day is going to bring, so I love that. At the drop of a hat, something can change, and I love that."

But joining the Motorcycle Support Unit was not an easy feat for Gunawan, as she attempted to join a group that only has a 40% pass rate for the testing required to place into the unit. At first, she failed.

Applicants need to go through an intensive two-week course. "We ride 24/7, 365, in all weather conditions. So, during that course, it's eight hours of being on a motorcycle. And the entire time, you're thinking in your head, 'You have to get this, you have to get this,'" Gunawan said.

Gunawan, who is 5'4 and weighs 150 pounds, said the hardest part of the class for her was having to maneuver and pick up the 1,100-pound bike. "I dropped the bike more times than I can think of, but I didn't let that stop me. I picked that bike up with a smile, every single time. I knew I would get it."

"We've had numerous women try out. I think one of the biggest things is picking up the motorcycle. There is technique to it, but it also takes some strength. That's pretty much what has disqualified, not just women, but a lot of people, on coming on the unit," said one of her training officers and fellow unit members, Officer Technician Brian Popiel.

"She was definitely determined to become a technician on this unit, to get mounted. She just, everyday she gave 120%."

The female officer said she wouldn't want to do any other job and hopes more women will one day ride alongside her.

"It was extraordinary. I feel like I got to break that glass ceiling and it is an amazing feeling, because I don't want anybody to think that they can't get something. ... If you put dedication and hard work into it, you'll get it and you'll achieve your goals."