'I don't care if I was burning': Heroic uncle rescues his 8-year-old niece from a house fire 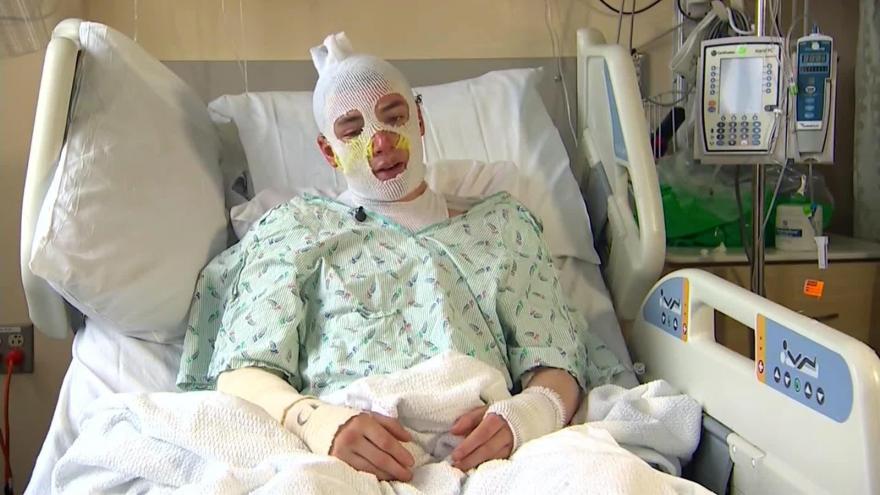 This super-uncle ran straight into a burning building to save his 8-year-old niece when a fire broke out at their home.

(CNN) -- This super-uncle ran straight into a burning building to save his 8-year-old niece when a fire broke out at their home.

Derrick Byrd, 20, says he has fourth-, third- and second-degree burns but does not regret any of the steps he took to save his niece.

"I don't care if I was burning," Byrd said. "I just wanted to make sure I got her out."

His face, neck, arms and back are covered in gauze as he recovers in a specialized care unit at Harborview Medical Center in Seattle.

When the fire started early Thursday at the home in Aberdeen, Washington, Byrd's sister and her three children were trapped in a second-floor room.

Byrd ran through the flames to get outside so he could catch his niece and two nephews as they jumped from the windows. The two boys, 6-year-old Junior and 4-year-old Rory, made the jump, but Mercedes was too scared.

Suddenly, Byrd's sister Kayla fell to the ground, and Mercedes fell backward into the home.

Byrd said he did not stop to think; he ran back into the burning home to save his niece. He grabbed Mercedes and took his shirt off to wrap around her face so she would not inhale smoke.

This left Byrd's back exposed to the flames, causing fourth-degree burns and nerve damage, but he said he would do anything for the children.

"I spend most my days off with my nieces and nephews," he said. "Mercedes is already an uncle's girl."

Kayla and the two boys are doing fine. Byrd expects to be moved to Grays Harbor Community Hospital, near Aberdeen, this week.

Fire investigators have not determined the cause of the blaze, according to CNN affiliate KOMO, but they believe that it started on the second floor.

The Aberdeen Police Department estimates that there was $268,000 worth of damage to the structure and its contents. Neighbors have started a food, clothing and toy drive for the family, KOMO reports.