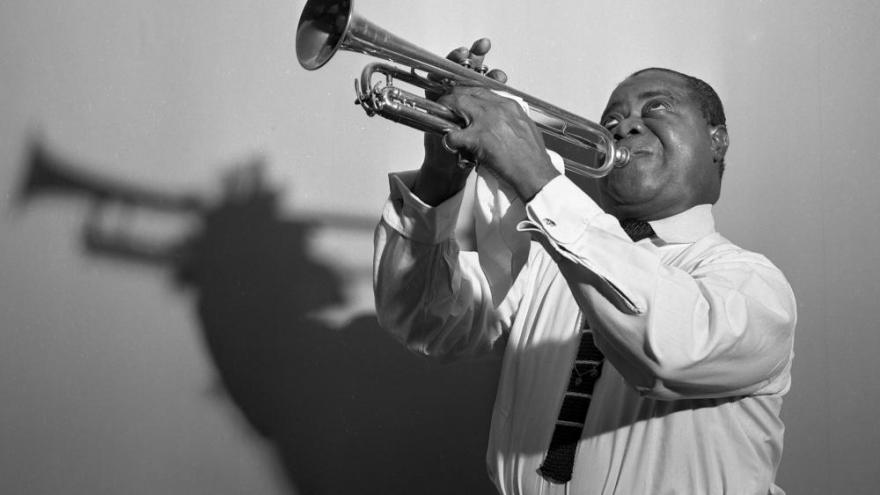 When Hurricane Ida hit New Orleans on August 29, the storm destroyed the building that housed the Karnofsky Tailor Shop, run by a family of Jewish immigrants, who had a warm relationship with jazz icon Louis Armstrong, pictured here on August 30, 1954.

(CNN) -- A piece of New Orleans' jazz history is now a pile of rubble.

When Hurricane Ida hit the city Sunday, the storm knocked out power, flattened homes and turned streets into rivers. It also destroyed an old brick building downtown on South Rampart Street, just a few blocks from the French Quarter.

The building hadn't looked like much in recent years. It sat empty, marred by graffiti and surrounded by vacant lots.

But it played a key role in the city's history. In the early 1900s, it became a second home to Louis Armstrong -- its tenants even helped launch his musical career -- long before he became a jazz icon.

Back then the building housed the Karnofsky Tailor Shop, run by a family of Jewish immigrants from eastern Europe. As a young boy Armstrong started hanging out with the Karnofskys' five sons and was given a job riding on the family's coal and junk wagon, blowing a "tin horn" to alert potential customers.

"It was Louis' first instrument," said musicologist John Baron in a 1999 interview.

The Karnofskys lived in an apartment above the shop and often invited young Louis over for meals.

"In Louis Armstrong's biography ... he recalls the Karnofsky family with great pleasure and says ... that he still has matzo in his kitchen because he loved to eat Jewish food at the Karnofskys," Baron said. "The Karnofskys were a tremendous, warm influence in his life."

When he was a little older the family loaned him money to buy his first cornet, a trumpet-like horn, on the condition that he work for them for another year, which he did, Baron said.

Years later, one of Armstrong's boyhood friends, Morris Karnofsky, opened the city's first jazz record store nearby. It became a favorite spot for musicians, and Armstrong made frequent visits over the years.

Armstrong went on to become a towering figure in jazz and popular music, appealing to Black and White audiences alike with his deep, resonant voice and virtuosic trumpet playing. He died in 1971.

Efforts to restore the building as a city landmark have not materialized. In 2019, the New Orleans Times-Picayune reported that a real estate firm had bought part of the Rampart Street block, including the Karnofsky store, and planned to restore it to pay homage to jazz history.

But today the store is a pile of crumpled metal, brick and wood.