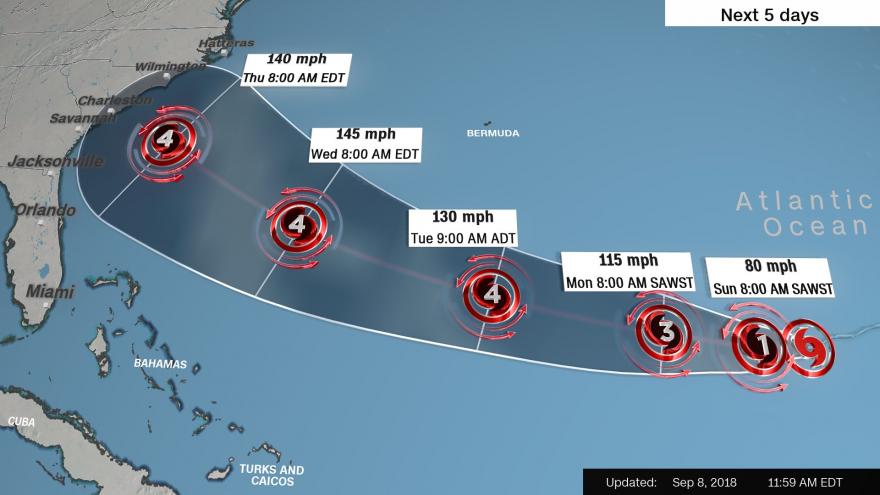 ATLANTA (AP) — The Latest on Hurricanes Florence and Isaac (all times local):

Florence has become even stronger over the Atlantic Ocean.

Florence had reached Category 3 strength earlier Monday, but data from hurricane hunter aircraft indicate the storm is quickly getting stronger as it moves over warm Atlantic waters.

Forecasters say the hurricane's strength is expected to fluctuate but it still will be a dangerous storm by the time it reaches the coast of South Carolina or North Carolina on Thursday.

The U.S. Navy is sending nearly 30 of its Virginia-based ships out to sea as Hurricane Florence barrels toward the Atlantic Coast.

Navy spokeswoman Alana Garas said the ships will disembark Monday from naval bases including the world's largest in Norfolk. The ships will head to portions of the Atlantic where they can avoid the storm.

Some ships will stay behind because they're undergoing maintenance and may be tied down with additional mooring and storm lines.
Meanwhile, naval bases near Virginia's coast are also sandbagging flood prone areas and topping off fuel generators.

Forecasters at the National Hurricane Center have said Florence is expected to be an extremely dangerous storm by the time it nears the coast of South Carolina or North Carolina on Thursday.
___

North Carolina's governor has urged residents to get prepared for Hurricane Florence as forecasters predict the state could be in the "bullseye" of the storm.

Gov. Roy Cooper said the state is bracing for three threats from Hurricane Florence: ocean surges along the coast, strong winds, and island flooding. He said North Carolina is "bracing for a hard hit" in what forecasters say will be a statewide event.

Evacuations of coastal communities began Monday and are expected to continue over the next few days.

Cooper said 200 National Guard troops have already been activated. He's also asked President Donald Trump for a disaster declaration so the state can get federal help as quickly as possible.
___

11: 10 a.m.
Officials along in North Carolina's coast are issuing a mandatory evacuation order for all visitors and residents on Hatteras Island as Hurricane Florence moves closer to the East Coast.

Gov. Roy Cooper declared a state of emergency and is urging all North Carolinians to prepare.

The state's Division of Marine Fisheries is also calling on fishermen to start preparing and should remove fishing gear from the water well before the storm arrives. Vessel owners should make sure to check safety equipment is working and remove boats from the water or take them to safe harbor as the storm approaches.
___

Hurricane Florence has strengthened into a Category 3 storm with 115 mph (185 kph) maximum-sustained winds as it swirls toward the U.S. East Coast.

Forecasters at the National Hurricane Center say Florence is expected to be an extremely dangerous storm by the time it nears the coast of South Carolina or North Carolina on Thursday.

The hurricane center says Isaac is a very small hurricane and its intensity could fluctuate as it approaches the Caribbean. However it's still expected to be at or near hurricane strength by the time it reaches the Lesser Antilles.

The current forecast for Hurricane Florence means the North Carolina coast could face a storm of unprecedented strength.

North Carolina has only been hit by one Category 4 hurricane since reliable records have been kept more than 150 years ago. Hurricane Hazel came ashore at the South Carolina-North Carolina state line with winds of 130 mph (209 kph) in 1954.

The state has only been hit by about a dozen Category 3 storms since 1850. The last was Hurricane Fran in 1996, which came ashore near Wilmington. South Carolina has been hit by three Category 4 storms: Hazel; Gracie, in 1959; and Hugo, in 1989.

Forecasters said Monday the storm to come ashore by late Thursday or early Friday. Some computer models show the storm making landfall near Wilmington, south of the Outer Banks. But it was still too early to predict an exact path for the storm.

(CBSNews) -- Rapidly intensifying Hurricane Florence could strike a direct and dangerous blow anywhere from the Carolinas to the Mid-Atlantic region later this week. Florence crossed the 74 mph threshold from tropical storm to a hurricane on Sunday morning, and by evening its winds were up to 85 mph as the National Hurricane Center warned a hurricane hunter plane found the storm strengthening quickly.

Forecasters said Florence was expected to become an extremely dangerous major hurricane sometime Monday and remain that way for days.

As of 5 a.m. EDT, Florence was centered about 625 miles southeast of Bermuda, moving west at 9 mph. Its maximum sustained winds were at 105 mph. Drawing energy from the warm water, it could be a fearsome Category 4 with winds of 130 mph or more by Tuesday, the Miami-based center said.

The center also said that Hurricane Isaac had become the 5th named hurricane of the 2018 Atlantic season.

Isaac was about 1,230 miles east of the Windward Islands with maximum sustained winds of 75 mph early Monday. The storm was moving west at 13 mph and expected to accelerate over the next 36 hours. It poses no threat to land at this time, the center said.

Forecasters said it is too early to know the exact path Florence will take but warned that it could roll ashore in the Carolinas by Thursday. But authorities were taking no chances as the governors of North and South Carolina and Virginia declared states of emergency far ahead of the approaching storm.

Navy ships off Virginia's coast were getting set to sail out of the path of the powerful hurricane, one North Carolina university canceled classes and people have begun stocking up on plywood, bottled water and other supplies even with Florence still far out at sea southeast of Bermuda.

People up and down the densely populated coast were told to be ready for the worst -- and not just for a possible direct blow against the coast. They warned that Florence could slow or stall on or near shore, with some forecasting models showing it could unload a foot or two of rain in places, causing devastating inland flooding.

"What that means is not only do we have a serious, 130 mph potential wind threat at landfall along with catastrophic storm surge, but also a very large inland flood threat that could include two feet of rain in certain spots including inland North Carolina's most populous cities," CBS News meteorologist David Parkinson said late Sunday. "The most important takeaway out of the storm is that this will not be a quick hitting major storm but a long duration one. We will likely be talking about this actively raining at this time next week. Pace yourselves. It's gonna be a long one."

Forecasters have warned of a rising threat of life-threatening storm surge, along with the damage of a hurricane's high winds.

Red flags flying on beaches warned swimmers to stay out of waters as seas began kicking up. People rushed to get emergency kits ready, map out escape routes and fill sandbags and secure their homes.

"Pretend, assume, presume that a major hurricane is going to hit right smack dab in the middle of South Carolina and is going to go way inshore," South Carolina Gov. Henry McMaster said. The state's emergency management agency said it is "preparing for the possibility of a large-scale disaster."

In Charleston, South Carolina, along the coast, city officials offered sandbags to residents. Myrtle Beach Mayor Brenda Bethune urged people to secure their homes but said it was too early to know if evacuations will be ordered.

"Literally, they are filling buggies full of water, shopping carts full of water," Ryan Deeck, grocery department manager at a Walmart, told The Sun News. "They're coming in and buying water and plates, and that's about all they're buying."

In Jacksonville, North Carolina, about 20 miles from the coast, some residents picked up hurricane supplies during their normal weekend shopping, The Daily News reported. Ilija Cesal told the newspaper he wouldn't worry about buying extra water or other supplies for a few more days.

"I'll see by Wednesday how that goes - we got over 48 hours before that happens," Cesal said.

As Hurricane Florence approaches the East Coast, the University of North Carolina at Wilmington canceled classes and encouraged its students to leave campus for a safer location.

In southeast Virginia, Naval Station Norfolk told its employees they should not leave their vehicles parked at the sprawling base in coming days because of the flood threat. The Navy planned to send ships from the Hampton Roads area of Virginia out to sea.