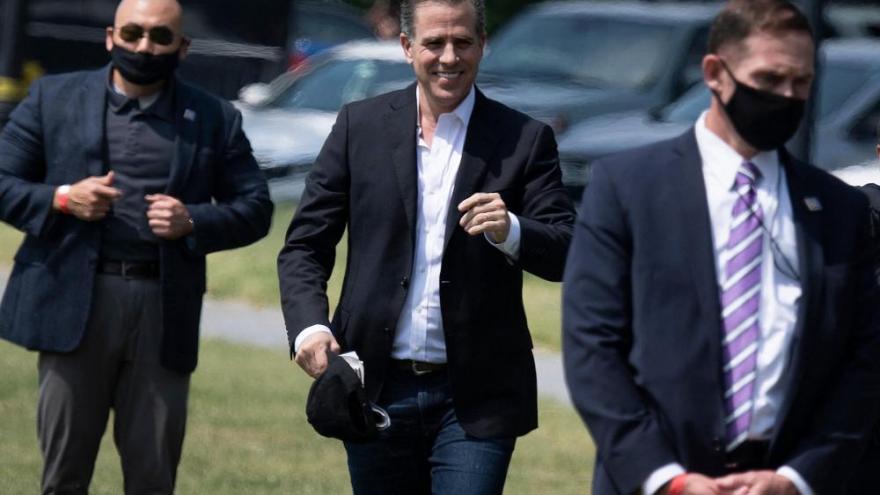 Hunter Biden walks to Marine One on the Ellipse outside the White House May 22, in Washington, DC. Biden is facing renewed questions about whether his art career could pose a conflict of interest for his father's work in the Oval Office after recent images from a glitzy private showing shot across social media.

(CNN) -- Hunter Biden is facing renewed questions about whether his art career could pose a conflict of interest for his father's work in the Oval Office after recent images from a glitzy private showing shot across social media.

One attendee at the LA event was the city's mayor, Eric Garcetti -- President Joe Biden's nominee to be the next US ambassador to India and a former national co-chair of his 2020 presidential campaign. Harrison Wollman, the press secretary for Garcetti's office, confirmed that the mayor had attended the show but said he did not purchase any art.

Garcetti was not the only political attendee at Hunter Biden's art preview. Michael Tubbs -- a former mayor of Stockton, California, who is now a special adviser to California Gov. Gavin Newsom -- posed with the President's son for a picture at the show. CNN reached out to Tubbs for comment about the show. Instagram posts show Hunter Biden's daughters Naomi and Maisy in attendance. Other attendees reportedly included former pro boxer Sugar Ray Leonard, artist Shepard Fairey and the musician Moby.

Danielle Brian, the executive director of the government watchdog Project on Government Oversight, said in a statement that Hunter Biden's attendance at the LA event "undermined the White House's early claims that neither he, nor the White House, would know who bought his art."

"The silver lining to this dark cloud is now the rest of us also know the universe of who might be interested in buying the paintings -- which will make it easier to track if those people are attempting to curry favor with the White House through the President's son," Brian argued.

At the start of his administration, President Biden vowed to avoid even the perception of a conflict of interest after years of accusations against former President Donald Trump that his business and family benefited from his office, including having his daughter and son-in-law hold top White House jobs.

"We're going to run this like the Obama-Biden administration," Biden told People magazine early in his tenure. "No one in our family and extended family is going to be involved in any government undertaking or foreign policy."

The President has long faced scrutiny over his family's actions and their appearance of conflicts of interest, including Hunter Biden's business dealings -- an issue that became a lightning rod for the 2020 presidential campaign and sparked impeachment proceedings against Trump. News of Hunter Biden's burgeoning art career and the prices of his artworks raised alarms among ethics experts expressing concern over whether individuals would purchase the art to gain influence with the President. The pieces were expected to be priced between $75,000 and $500,000 -- largely seen as steep for an artistic debut.

In July, the first son told the "Nota Bene: This Week in the Art World" podcast that art prices are "completely subjective" and that he never set the prices.

Asked for a response to Garcetti's attendance and whether it posed a conflict of interest, White House press secretary Jen Psaki told reporters on Wednesday, "We've spoken to the arrangement that is run by the gallerist and Hunter Biden's representatives that the White House provided suggestions for."

"I'd refer you to the gallerist for questions about the event, as well as the representatives for Mr. Garcetti in terms of his attendance," she continued.

The White House had earlier helped form an ethics agreement with the art gallery selling Biden's paintings, the Georges Bergés Gallery, which had booked Milk Studios for the showing.

Two sources familiar with the sales arrangement told CNN that the purchaser of the artwork will be kept anonymous and neither Hunter Biden nor the public will have knowledge of who bid on or purchased the work. If there is any unusual behavior -- such as the offer being too high or the collector not appearing interested in the work -- the gallery is expected to turn down the offer, the sources said.

A source familiar with the agreement also previously said that while Hunter Biden is attending the shows, he will not have any conversations related to prospective sales. The source said he was expected to focus on the creative process and what his art means to him, not the sale or price.

However, there's no clear enforcement mechanism for the standards agreed upon by the gallery and prospective purchasers. And Hunter Biden was expected to be able to see who the prospective buyers are at these shows, even if he does not talk to them about prices or sales.

The Georges Bergés Gallery had previously indicated that Hunter Biden would take part in a preview of his work in Los Angeles this fall, but details about attendees, an exhibition date and a venue were not made public.

When asked for more information about the LA event, including what pieces had been sold and the curation of the show, Georges Bergés, who owns the gallery, told CNN, "We have no additional information."

Richard Painter, the former chief ethics lawyer to President George W. Bush, told CNN the White House should have taken a different approach with the art sales -- either preventing Biden from selling the art while his father is in office or being more transparent about who purchased the art and requiring their recusal.

"Plan B would be to find out who these buyers are and to keep them as far away from the executive branch as possible. And you would not have prospective ambassador nominee showing the art gallery," Painter, who is now a professor of corporate law at University of Minnesota Law School, told CNN.

"I think this secrecy thing never was going to work," he continued, referring to the purchase agreement.

A gallery spokesperson told CNN over the summer that an invitation-only event in New York City was expected to follow the LA event. But when reached for comment on Thursday, Bergés did not disclose additional details about the New York show.

Last month, Comer sent letters to Bergés requesting documents and communications in regard to the prices set for the art, including the gallery's communications with the White House.

Comer requested that those documents be provided by September 29, but his office told CNN on Thursday that the gallery has yet to respond to any of his inquiries.