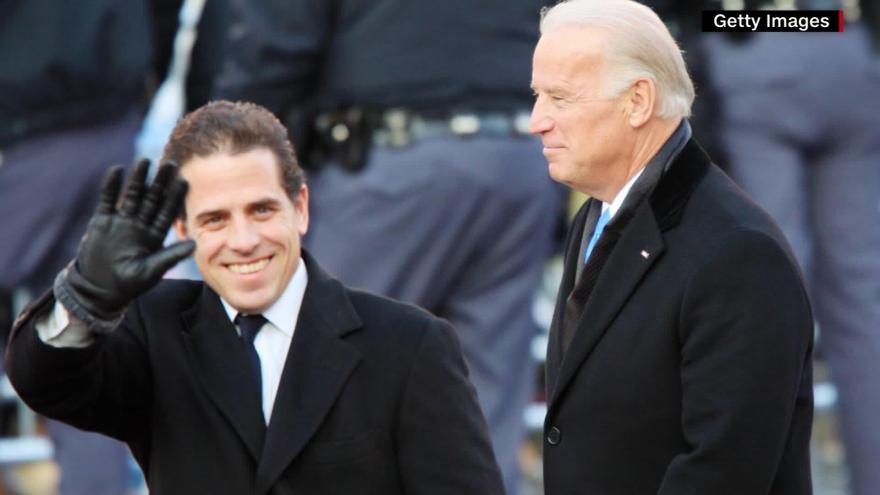 In a new memoir, Hunter Biden reveals his staggering slide into crack addiction and how he was buoyed by his father, President Joe Biden. "Beautiful Things" details the younger Biden's lifelong struggles with drugs and alcohol; his first drink was aged 8, downing a glass of champagne at a family event.

(CNN) -- In a new memoir, Hunter Biden reveals his staggering slide into crack addiction and how he was buoyed by his father, President Joe Biden. "Beautiful Things" details the younger Biden's lifelong struggles with drugs and alcohol; his first drink was aged 8, downing a glass of champagne at a family event.

Biden's book chronicles his life to date, with lengthy passages on his close relationship with his late brother, Beau Biden, and it sheds insight on what it was like to grow up the son of Joe Biden.

"Beau and I loved his elaborate talks about current events, usually beginning with historical backgrounding that could reach back centuries, then ending with personalities and dynamics at play today," writes Biden of his father, a man known in part for his verbose answers and explanations.

But it's Biden's reveal about his dad's years' long support, sadness and helplessness over his only living son's battle with crack and alcohol that sheds light on the toll addiction and tragedy has had on the president.

Biden writes of a particularly bad binge that led to his father, then vice president of the United States, shedding some of his security detail and turning up unannounced on Biden's doorstep.

"He looked aghast at what he saw," writes Biden, who said he told his dad he was fine. " 'I know you're not fine, Hunter,' he said, studying me, scanning the apartment. 'You need help.' "

The conversation that time ended in a trip to rehab, and a period of sobriety, in the nick of time. "Dad saved me. When he knocked on my door, he jolted me out of whatever state I was in and saved me by making me want to save myself. Left on my own, I was certain I would not have survived," writes Biden. "That was Dad. He never let me forget that all was not lost."

'It gave me hope'

Now president, Joe Biden said in an interview that aired in February with CBS News that he was proud of his son's book, and the courage with which Biden approached telling his story.

"The honesty with which he stepped forward and talked about the problem. And the hope that -- it gave me hope reading it," said the President.

To the millions of Americans struggling with addiction, Biden's words held weight, helping to remove the shame and stigma many addicts face.

Though unconditional, the love of his father clearly could not prevent Biden from spiraling out of control on several occasions over several years, which Biden details in "Beautiful Things."

The passages Hunter Biden, a father of three adult daughters with his first wife, and a 1-year-old son with his current wife, writes about his reliance on alcohol and drugs are the most compelling, and cautionary, of the memoir. At one point, deep in his daily use of crack cocaine, Biden says he invited his supplier, a homeless woman he nicknamed "Bicycles," to live with him at his Washington, DC, apartment as a roommate. A later relapse, in 2018, found Biden in Los Angeles, buying drugs ("I used my superpower -- finding crack anytime, anywhere -- less than a day after landing at LAX") from sketchy and dangerous characters, not particularly caring if one pulled a gun on him, or if his wallet was stolen.

By this point, Biden was roiled in a scandal that had political implications, something Trump latched onto with a vengeance, his supporters often chanting, "Where's Hunter?" at rallies.

The vitriol stemmed from Biden's ties to Burisma Holdings, a natural gas producer in Ukraine for which Biden was on the board, earning a five-figure-per-month salary, according to the book. Biden devotes almost 20 pages in his memoir to the Burisma episode.

Yet the issue was a lightning rod for Trump and his supporters, and Biden admits if he was offered the job all over again, he would say "no" to taking it, if only to avoid the scrutiny.

"There's no question my last name was a coveted credential," writes Biden of why Burisma was attracted to hiring him for a lot of money and a somewhat unclear role.

"I hope you know what you're doing," was what Joe Biden said to his son when it was announced he was taking a position with the Ukrainian firm. Hunter Biden writes: "Do you think if any of the Trump children ever tried to get a job outside of their father's business that his name wouldn't figure into the calculation?"

The money that Biden made also, he admits, fueled his addiction. Extra funds meant extra resources for drugs -- which he used with regularity, defining himself at this and other periods in his life as a "functioning addict."

"Crazy as it sounds, a substance abuser often feels like a smarter version of a non-abuser," writes Biden. "I wasn't a sloppy or mean drunk; I wasn't an addled or dangerous crackhead. Whether it's genetics of psychological, I have the capacity and tenacity to use to excess, and a single-minded unwillingness to quit. That makes addiction easy rather than hard."

Biden details a particularly heart-wrenching attempt by his family at an intervention, orchestrated by Jill Biden and Joe Biden at their Delaware home and attended by them and his daughters. Joe Biden told his son: "I don't know what else to do. I'm so scared. Tell me what to do."

The humanity of confronting a loved one with addiction is an immediate equalizer, no matter if you're a presidential candidate or a stay-at-home mom, a corporate executive or a school teacher. In that moment, Joe Biden, a man who in his life faced more tragedy than most, was as defenseless and vulnerable as any parent in his position.

Biden was furious he had been caught out, bolted and tried to leave, his daughters attempting to block his car. Joe Biden, Hunter Biden writes, chased him down the driveway.

"He grabbed me, swung me around, and hugged me. He held me tight in the dark and cried for the longest time," he writes.

Ultimately, in his telling, it wouldn't be the love of his children or father that finally convinced Hunter Biden to put down the drugs. Instead, it would be a woman named Melissa Cohen, whom he met in Los Angeles in the spring of 2019. Melissa was and remains, Biden says, his reason for being clean. On their first date, he confessed his love for her; seven days later, they were married.

"The decision never felt rash or harebrained or reckless. It felt urgent. I felt like I'd been given a reprieve," writes Biden.

The two welcomed a son, named Beau, in March of last year. The family now live in Los Angeles, where Biden spends most days painting, tapping into a creative side that he says was always there but lay dormant under the stress of building his professional career as a lawyer and businessman. "I'm not hanging on by my fingernails this time; the desire, the itch, to use is gone," he writes.