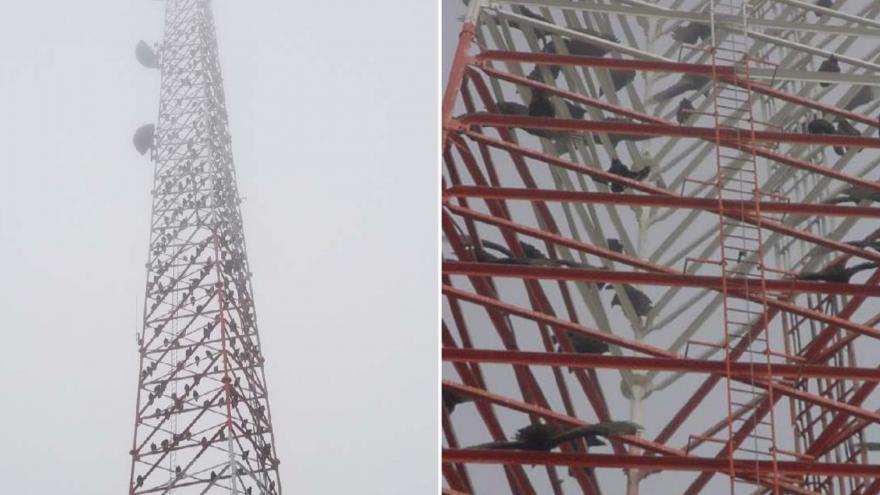 Hundreds of vultures have made a perch out of a US Customs and Border Protection radio tower, and the government has had enough.

(CNN) -- Hundreds of vultures have made a perch out of a US Customs and Border Protection radio tower, and the government has had enough.

Approximately 300 vultures have taken to resting on CBP radio towers in Kingsville, Texas, perching on the support structures of the masts and "generally creating a safety hazard," according to a spokesperson for CBP.

"They will often defecate and vomit from their roost onto buildings below that house employees and equipment," the spokesperson said. "There are anecdotes about birds dropping prey from a height of three-hundred feet, creating a terrifying and dangerous situation for those concerned."

The birds have been roosting on the tower for more than 6 years. There aren't any nests or babies, but the vultures seem to have decided the radio towers are akin to a comfy recliner, and they won't leave.

The droppings, mixed with urine, have made their way onto railings, catwalks, supports and rails throughout the tower, where workers can come in contact with it, reads a memo from the Department of Homeland Security.

Understandably, CBP is currently searching for solutions to the problem.

The agency is working with Fish and Wildlife, the US Department of Agriculture, environmental experts and the Texas State Historical Preservation Officer to find a solution that won't harm the birds.

Right now, the agency is looking primarily into netting as a solution, which would drape over the towers to prevent the vultures from roosting. The CBP is hoping to deploy the netting by this August, in an effort to avoid what they call "natural heavy vulture roosting period" in the fall.

Both Turkey Vultures and Black Vultures -- two of the most common types of vultures in the US -- roost communally. Their communal roosts can consist of upwards of thousands of vultures at a time, according to the Cornell Lab of Ornithology.