Hundreds of thousands march for gun control in the US 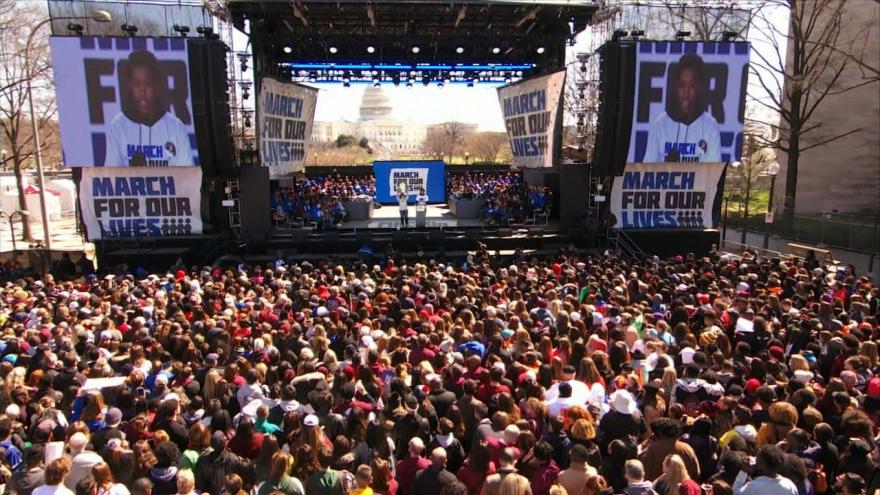 WASHINGTON (AP) — Summoned to action by student survivors of the Florida school shooting, hundreds of thousands of teenagers and their supporters rallied in the nation's capital and cities across America on Saturday to press for gun control in one of the biggest youth protests since the Vietnam era.

Organizers of the March for Our Lives rally in Washington hoped their protest would match in numbers and spirit last year's women's march, one of the biggest protests in the capital since the Vietnam era and one that far exceeded predictions of 300,000 demonstrators.

Bearing signs reading "We Are the Change," ''No More Silence" and "Keep NRA Money Out of Politics," protesters packed Pennsylvania Avenue from the stage near the Capitol, stretching many blocks back toward the White House.

"We will continue to fight for our dead friends," Delaney Tarr, a survivor of the Florida tragedy, declared from the stage. The crowd roared with approval as she laid down the students' central demand: a ban on "weapons of war" for all but warriors.

President Donald Trump was in Florida for the weekend. A motorcade took him to his West Palm Beach golf club in the morning.

"It's pretty simple for me," said Zoe Tate, 11, from Gaithersburg Middle School in Maryland, explaining why she marched in Washington. "I think guns are dumb. It's scary enough with the security guards we have in school. We don't need teachers carrying guns now. I find it amazing that I have to explain that idea to adults."

Said her mother, Maria Blaeuer: "For our kids, feeling safe is fundamental, and they don't feel safe." 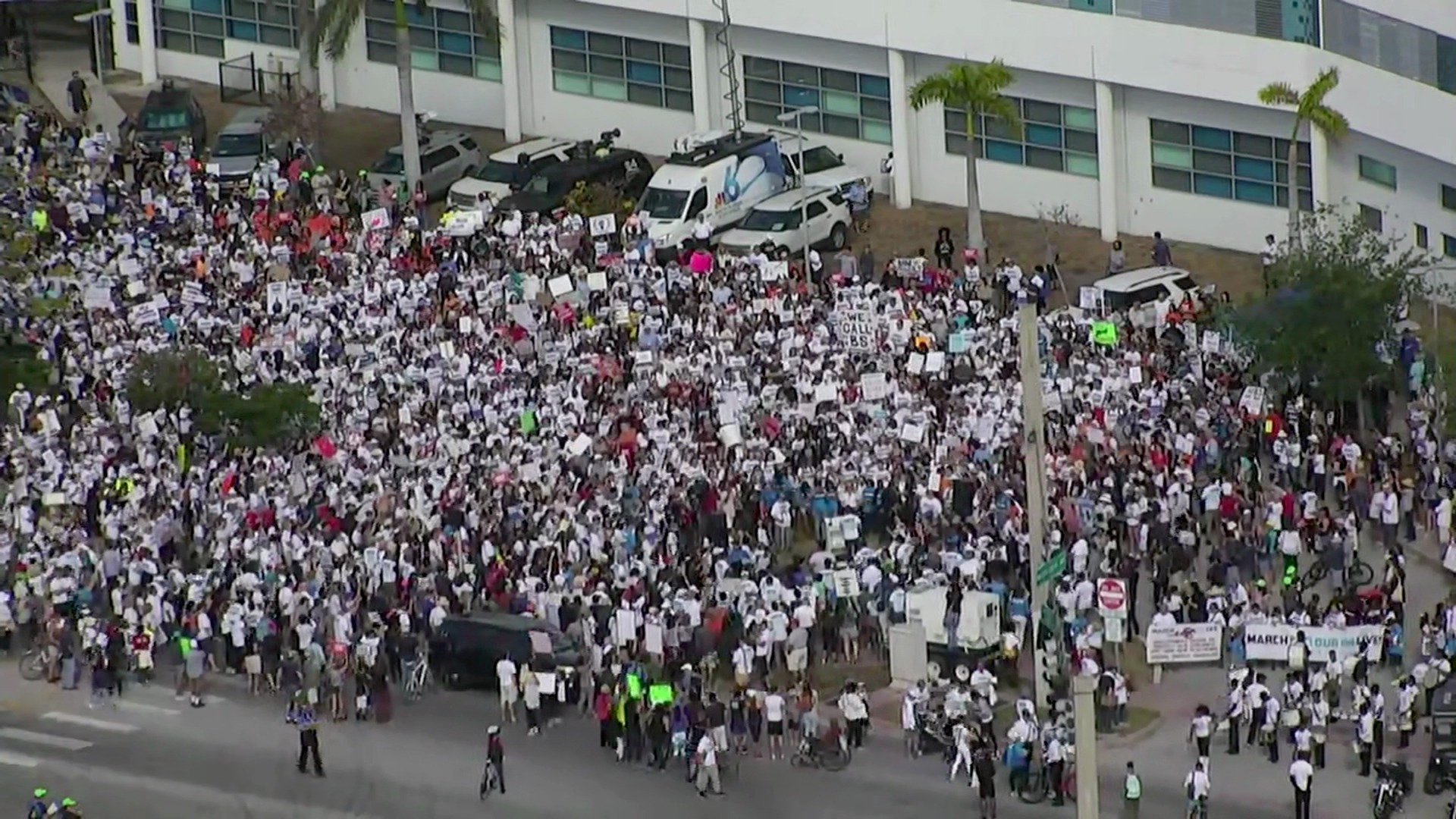 The police presence was heavy as more than 20,000 people filled a park near the Florida school, chanting slogans such as "Enough is enough" and carrying signs that read "Why do your guns matter more than our lives?" and "Our ballots will stop bullets."

The National Rifle Association went silent on Twitter on Saturday morning, in contrast to its reaction to the nationwide school walkouts against gun violence March 14, when it tweeted a photo of an assault rifle and the message "I'll control my own guns, thank you."

As of early afternoon, Trump himself had yet to weigh in on Twitter about the protests.

About 30 gun-rights supporters staged a counter-demonstration in front of the FBI headquarters, standing quietly with signs such as "Armed Victims Live Longer" and "Stop Violating Civil Rights."

Gun violence was fresh for some in the Washington crowd: Ayanne Johnson of Great Mills High School in Maryland held a sign declaring, "I March for Jaelynn," honoring Jaelynn Willey, who died Thursday two days after being shot by a classmate at the school. A boy was injured in the attack, and the shooter died.

Michael Rocco, an 18-year-old freshman at Emerson College in Boston, came to Washington to support the students' calls for banning high-capacity magazines and assault-type rifles like the one used by the Florida killer, tightening background checks and school security, and raising the age to buy guns. He said he grew up in an era of school violence.

"I've been genuinely terrified of mass shooting," he said. "When I was a kid, I was always scared to go to movie theaters because I was afraid I was going to be killed."

Rallying outside the New Hampshire Statehouse in Concord, 17-year-old Leeza Richter said: "Our government will do more to stop us from walking out than it will to stop a gunman from walking in."

Since the bloodshed in Florida, students have tapped into a current of gun control sentiment that has been building for years — yet still faces a powerful foe in the NRA and its supporters.

Organizers hope the passions of the crowds and the under-18 roster of speakers will translate into a tipping point starting with the midterm congressional elections this fall.

"If nothing changes, we're going to continue to have school shootings," she said. "I understand the Second Amendment is important. We've always had this right. But when the Founding Fathers put that right in place, they didn't mean it to become what it is today."

Polls indicate that public opinion nationwide may be shifting on an issue that has simmered for generations, and through dozens of mass shootings.

A new poll conducted by The Associated Press-NORC Center for Public Affairs Research found that 69 percent of Americans think gun laws in the U.S. should be tightened. That's up from 61 percent who said the same in October 2016 and 55 percent when the AP first asked the question in October 2013. Overall, 90 percent of Democrats, 50 percent of Republicans and 54 percent of gun owners now favor stricter gun control laws.

But even with claims of historic social momentum on the issue of gun control, the AP poll also found that nearly half of Americans do not expect elected officials to take action.

Among the questions facing march organizers and participants will be how to translate this one-day event into legislative change. One way they hope to do that is by registering young voters and channeling energy into the midterm elections.