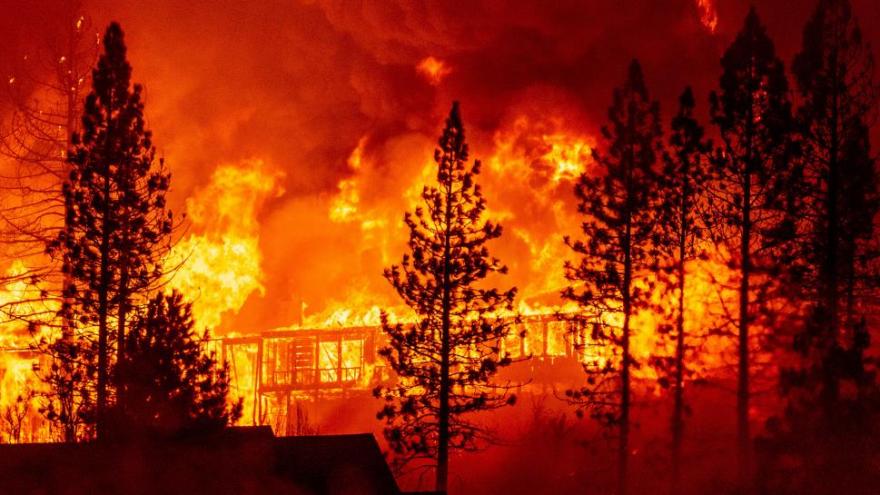 A home is engulfed in flames during the "Creek Fire" in the Tollhouse area of unincorporated Fresno County, California early on September 8, 2020.

"This could be the greatest loss of human lives and property due to wildfire in our state's history," Brown said.

"We are not getting any relief from the weather conditions," Brown said. "Winds continue to feed these fires and push them into our towns and cities."

The governor didn't provide specifics on how many homes were lost, but emergency management officials said more than 470,000 acres are burning.

In Oregon, at least 14 large fires burned Wednesday, according to the National Interagency Fire Center (NIFC).

Brown says some situations have been dire enough to make even firefighters retreat.

A child has died in the Cold Springs Fire in northern Washington, according to the state Commissioner of Public Lands Hilary Franz.

"My heart breaks for the family of the child who perished in the Cold Springs fire. I am devastated. The (Department of Natural Resources) family is devastated. The pain that family is going through is unfathomable," she wrote on social media.

The death is the first due to a wildfire in the state.

Two relatives of the child are both critical in intensive care at Harborview Medical Center in Seattle and are suffering from burns, a hospital spokeswoman told CNN.

Authorities were still in the process of recovering the remains, he said.

Wednesday's deaths bring the state's total of fatalities for this fire season to 11.

In Oregon, two people were killed as a result of the wildfires in Marion County, Sheriff Joe Kast said.

"We also fear that this is not going to be the only folks we'll find deceased up there," Kast added.

California officials say people should be ready to evacuate

Thousands more people in Northern California should be prepared to evacuate if called upon -- including Oroville and part of the town of Paradise -- because one of the state's many major wildfires was burning in their direction, authorities warned Wednesday.

Oroville is a city of 20,000 people some 65 miles north of Sacramento. Just north of Oroville is Paradise, one of the communities devastated by 2018's deadly Camp Fire.

"It's very smoky and snowing ash but no fire in town yet," said Dan Sauvageau, who lives near Paradise.

The Butte County Sheriff's Office issued evacuation warnings -- meaning people should be prepared to leave if ordered -- for Oroville and one southeastern portion of Paradise, saying they could come under threat by the North Complex Fire, one of the 10 largest fires in state history.

That fire is a group of merged blazes that have burned more than 250,000 acres in Plumas National Forest since a lightning storm sparked them August 17.

Smaller communities near the fire were under mandatory evacuation areas Wednesday, the sheriff's office said.

In California, about two dozen major wildfires are now raging in a year that already has seen 2.5 million acres charred. That's a record for the Golden State for one year, and four months remain in the fire season, Cal Fire said.

Hot, dry and windy conditions are fueling numerous wildfires across the US West -- including Oregon and Washington -- and weather conditions may make things worse.

As of Wednesday night, areas home to more than 10 million people in Washington, Oregon and California were under red flag warnings. These warnings caution that conditions likely to start or spread fires -- strong winds and dry conditions -- were imminent or happening.

Size of Central Park burned every half hour

California has "fires burning in the north part of the state all the way down to the Mexican border, about 800 miles between the furthest distant fires, so we're stretched across the landscape," Cal Fire Chief Thom Porter told CNN.

The Creek Fire, racing through the mountains of Madera and Fresno counties in the state's central section, has destroyed at least 360 structures since the flames erupted Friday evening. The fire has burned more than 163,000 acres and has no containment. Since it began, the fire has burned an area roughly the size of Central Park every 30 minutes over the past several days.

"We have 150 million trees that died in the southern Sierra several years ago, and those are fueling the Creek Fire, which is the biggest and most concerning fire to us right now," Porter said late Tuesday.

About 385 people and 27 animals were airlifted by helicopter over the past several days after getting trapped by the fire in the Sierra National Forest, California National Guard Col. David Hall told CNN. At least 30,000 people have been evacuated, Fresno County sheriff's Lt. Brandon Pursell said late Tuesday.

In the Los Angeles area, Santa Ana winds -- hot, dry air descending from the inland mountain regions -- threaten Wednesday to help start or expand fires, including the Bobcat Fire burning in the San Gabriel Mountains northeast of the city.

The Bobcat Fire has burned more than 19,700 acres, and forced evacuation orders for Big Santa Anita Canyon, Monrovia Canyon, Mount Wilson and San Gabriel Canyon, according to the NIFC.

The fire, sparked during a gender reveal party, was caused by a "smoke-generating pyrotechnic device" used at the party on Saturday morning in El Dorado Ranch Park in Yucaipa, about 70 miles east of Los Angeles, Cal Fire investigators determined.

National forests in the state -- about 20 million acres -- are closed due to the "explosive growth" of ongoing fires, according to the US Forest Service.

California hasn't yet reached what is typically the heart of its fire season, when the Santa Ana winds really begin to add fuel to an already dangerous recipe for fire.

The frequency of fall days with extreme fire weather conditions in California has more than doubled since the 1980s, driven mainly by climate change, a recent study found.

'Urgent and scary to get out'

Brown said Tuesday evening that "In some areas, the situation is so difficult and dangerous that even firefighters are being evacuated.

Fires were threatening homes in Clackamas County south of Portland and the Medford and Phoenix areas in Jackson County.

Oregon has experienced "historic wildfires" almost every year in Brown's time in office, but this year's fires are "unprecedented," she said. "This is definitely a once-in-a-generation event."

Brown said Wednesday that in some areas the worst fire conditions in 30 years exist.

Clackamas County, in northwestern Oregon, declared a state of emergency as a response to several wildfires that prompted evacuations. Across the county, more than a dozen Level 3 -- "Go! Evacuate now!" -- evacuations were in place, with several other areas ordered to be ready for evacuations, officials said.

In neighboring Marion County -- home to the state's capital city -- another state of emergency was declared Tuesday, with residents across the region forced out of their homes by fires.

One family told CNN affiliate KPTV they had a brief notice to leave their home as nearby flames moved in.

"We drove under a tree that had fallen over and there was burning limbs and it was like urgent and scary to get out," Sabrina Kent told the news station.

The family is staying in an RV near a local grocery store, according to the affiliate, as they map out their next steps.

"This is the most messed up year, can we just fast forward?" Kent told KPTV.

In Washington state, more acres were burned Monday than were charred in the past 12 fire seasons, Gov. Jay Inslee said, and dry conditions continue to fuel the blazes. In one eastern Washington town, flames destroyed more than 80% of homes and public infrastructure.

"I just can't reiterate," Inslee said, "we think almost all of these fires were human-caused, in some dimension. If you can avoid being outside for anything that would even cause a spark, I hope people can avoid those conditions."

In the town of Malden, about 80% of the town's homes and public infrastructure were destroyed, including the fire station, post office, city hall and library, authorities said.

"The scale of this disaster really can't be expressed in words," Whitman County Sheriff Brett Myers said.Farther west, in Graham, a fire that ripped through the area left what residents described as a "war zone," according to CNN affiliate KOMO. Some lost everything.

At least six houses and three shops were destroyed, according to the news station, along with sheds, equipment and vehicles. The fire department issued evacuation orders for about 100 residents, the station reported.

"It's devastating for the people who live here for sure, and to me, and my heart. This fire came (through) hot and fast," Graham Fire & Rescue's Assistant Fire Chief Steve Richards told the affiliate. "It was a firestorm it pushed right through."

For the country as a whole, the number of fires recorded and the acreage burned in 2020 are below the 10-year average for the same period, according to National Interagency Fire Center. A total of 41,147 fires have been reported so far this year, while the average number of fires through September 9 over the past 10 years is 43,915, the NIFC says.

The total acreage burned since the beginning of 2020 is nearly 4.7 million, compared with the 10-year average of 5.7 million acres at this point of the year, the NIFC said.