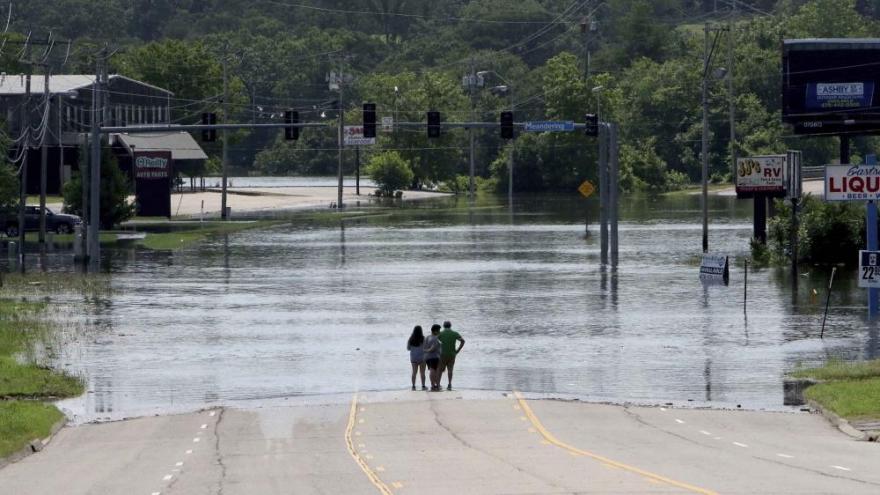 People stand in the middle of the street and look out over the flooded Massard Creek in Arkansas.

(CNN) -- Heavy rains in the central United States have caused levees to breach along the Mississippi and Arkansas rivers, which may eventually put thousands of homes in danger.

An Arkansas River levee breached early Friday southeast of the city of Dardanelle, sending water gushing into farmland that already had been saturated by leaks in the levee a day earlier, video from CNN affiliate KARK shows.

"A significant amount of water has overflowed because of the breach," said CNN meteorologist Allison Chinchar.

The water spread from there, and flooding had affected 350 homes in the area by Friday afternoon, adding to hundreds flooded around the state, Arkansas Department of Emergency Management spokeswoman Melody Daniel told CNN.

Dardanelle -- a city of about 5,000 people -- was preparing for floodwaters to encroach from the south, Mayor Jimmy Witt said.

"Right now we're planning to take some equipment down there and build some berms to try and slow that down or stop its progression coming into town," Witt said in a news conference Friday.

The Arkansas River at Dardanelle was nearly 2 feet above its record crest before the breach.

If more levees along the swollen river fail, many more homes could be in the path of flooding.

The biggest concern is in the unprecedented pressure the flooding has put on the levees: They have never held back this much water for this long, the Department of Emergency Management said earlier this week.

Flooding could affect thousands of homes near the river, ranging from minor damage to destruction, Daniel said. Besides the levee near Dardanelle, one in Logan County along state Highway 309 has been overtopped, she said.

"This is looking to be record-breaking all along the Arkansas River, and this is something we have never seen before," Daniel said.

The river was at or near record levels in several locations Friday morning, including Fort Smith and Ozark, Arkansas.

Record crests for the river have already been set in Ponca City, Oklahoma, and in Van Buren, Morrilton and Toad Suck in Arkansas. More record crests are predicted downstream, including in Pendleton, Arkansas.

Besides Arkansas, other states along the Mississippi River are experiencing their own threats from the rising water levels. In fact, 80 flood gauges running through 10 states -- from North Dakota to Louisiana -- are indicating major flooding, the highest category.

In Missouri, a levee failure along the Mississippi caused a mandatory evacuation in the West Quincy area, the Marion County Sheriff's Office told CNN.

More than 300 roads in Missouri were under water early Friday, with the potential for more to come, the state's Department of Transportation said.

The Mississippi in St. Louis is expected to crest Tuesday around 46 feet -- the second-highest level on record behind the 1993 floods. It would also be the second Top 7 crest of all time this year -- with the previous being 41.7 feet on May 6.

Some of the high water has come from heavy rains: CNN meteorologist Brandon Miller said portions of northern Oklahoma through central Kansas have seen 15 to 20 inches of rain this May, which is 300% to 400% of the normal amount.

There's a brief break from rain this weekend in the hardest hit areas, Chinchar said, but heavy rain is forecast for parts of Oklahoma, Kansas, Missouri and Arkansas with another 4 to 6 inches possible next week. Some areas could even see up to 10 inches of rain, Chinchar said.

The Army Corps of Engineers' New Orleans district announced it plans to open the Morganza Floodway on June 6 -- later than expected.

The floodway is designed for emergency flooding, and when operated, it diverts excess floodwater from the Mississippi to the Atchafalaya Basin, according to the Corps.

The Mississippi is expected to reach 60 feet at the spillway on June 9, instead of an earlier forecast of June 5.

The operation of the floodway can cause damage to properties surrounding it, the Corps said.