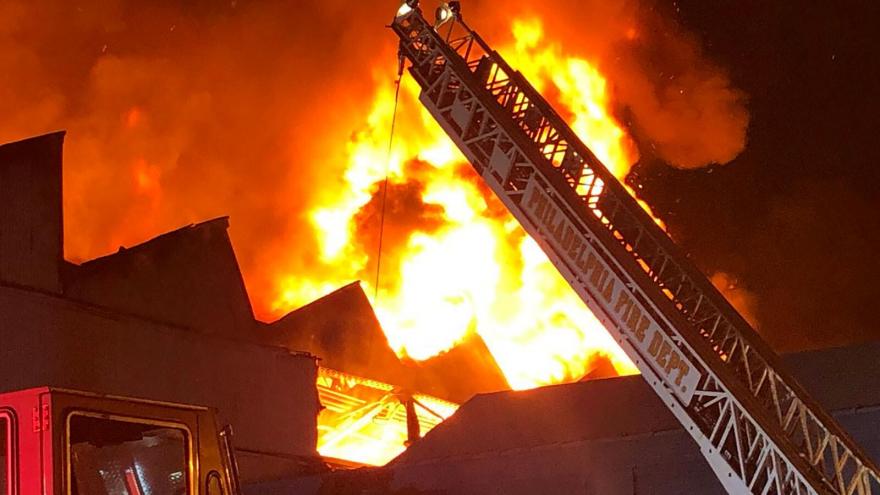 More than 250 firefighters with the Philadelphia Fire Department spent more than nine hours battling a massive six-alarm blaze at a warehouse complex that broke out early Sunday morning.

(CNN) -- More than 250 firefighters with the Philadelphia Fire Department spent more than nine hours battling a massive six-alarm blaze at a warehouse complex that broke out early Sunday morning.

One firefighter was injured in the fire, which is now under control, Fire Commissioner Adam Thiel said at an onsite press briefing Sunday morning. Agencies are still on the scene dousing hot spots.

"A six-alarm fire is the largest fire that we've had since early 2016, before I arrived here in Philadelphia," Thiel said.

A six-alarm fire entails bringing "roughly half of the on-duty strength" of the fire department, he added, noting that an oil refinery fire in June 2019 was only a three-alarm blaze.

The fire department was initially dispatched at roughly 2:07 a.m, and the blaze escalated to a six-alarm fire over the course of three hours. Firefighters arrived at the scene to find fire on the roof line of one of the warehouse complex buildings.

Damage to the warehouses includes building collapses, according to the fire commissioner.

"The fact that this fire did not go all the way down this street and take out this entire block as well as the other way is an absolute testament to the -- there's no other word for it -- the valor of Philadelphia firefighters who put themselves in grave danger to protect lives and property in this instance, as they do 24/7, 365," Thiel said.

Other groups onsite include the Philadelphia Police Department, ATF, Department of Licenses and Inspections, utility and railroad companies, SEPTA, and the 2nd Alarmers volunteer fire association, he added.

The fire department is expected to stay onsite for several days as they continue putting out hot spots and conducting an investigation.