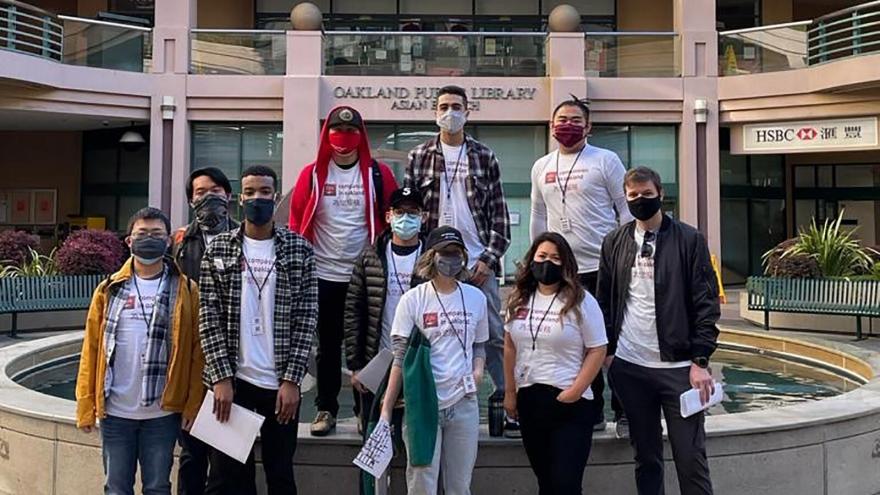 Hundreds of volunteers signed up to accompany older Asian Americans in Oakland's Chinatown neighborhood to help keep them safe.

(CNN) -- Jacob Azevedo's stomach turned as he watched a disturbing video of an 84-year-old Thai American man who was fatally shoved to the ground on a sidewalk in San Francisco.

It was the second video of an unprovoked attack on an elderly Asian American that Azevedo, a resident of Oakland, had seen on social media out of the Bay Area within an hour, he told CNN.

Ever since the world learned of the new coronavirus outbreak in Wuhan, China, harassment and violence targeting the Asian American and Pacific Islander community has rapidly increased across the United States.

More than 2,808 firsthand accounts of anti-Asian hate from 47 states and the District of Columbia were reported between March 19 and December 31, 2020, with 7.3% of those incidents involving Asian Americans over the age of 60, according to a report by Stop AAPI Hate, a coalition documenting anti-Asian hate and discrimination amid the COVID-19 pandemic.

A recent surge in attacks on older Asian Americans in the Bay Area has heightened concerns among activist and leaders in the community.

Exhausted by the violence, Azevedo offered on social media to walk with anyone in Oakland's Chinatown neighborhood to help them feel safe.

His idea quickly resonated throughout the community and within days he had nearly 300 volunteers reaching out to join him to protect the community in a project now called Compassion in Oakland.

Azevedo, who is of Hispanic descent, believes this is a moment for all minority groups to stand in solidarity with the Asian American community. He said people from all racial backgrounds and ages reached out to him sharing the same desire to help support the community.

"This is important because this community just needs healing," Azevedo said. "There's a lot of racial tensions going on because of the previous president's rhetoric but in general our communities need healing. This is an issue that's been ongoing for a while."

Stop APPI Hate Co-Founder, Cynthia Choi, told CNN that crime and violence is nothing new to the Asian community.

"This is a problem and issue that doesn't get a lot of attention, especially in low income communities," Choi said. " And of course the pandemic, I think has exacerbated the conditions and exposed racial disparities."

Choi said in times of crisis when vulnerable people are being targeted it's heartwarming to see community members come out and take action.

"In Oakland, they're planning this action and it's really less about controlling and more about supporting the community and showing up," she said. "It's showing our elders who are afraid, afraid to leave their house that we're here, we want to support you we're holding you right now."

Azevedo hopes that the organization can work with law enforcement in the future to protect the community.

"All of us need to come together if we hope to make this a safer community for the years to come," Azevedo said.

The group planned a soft launch of the project on Saturday with a few volunteer groups on the streets. They hope to continue to build awareness of the issue in the community.