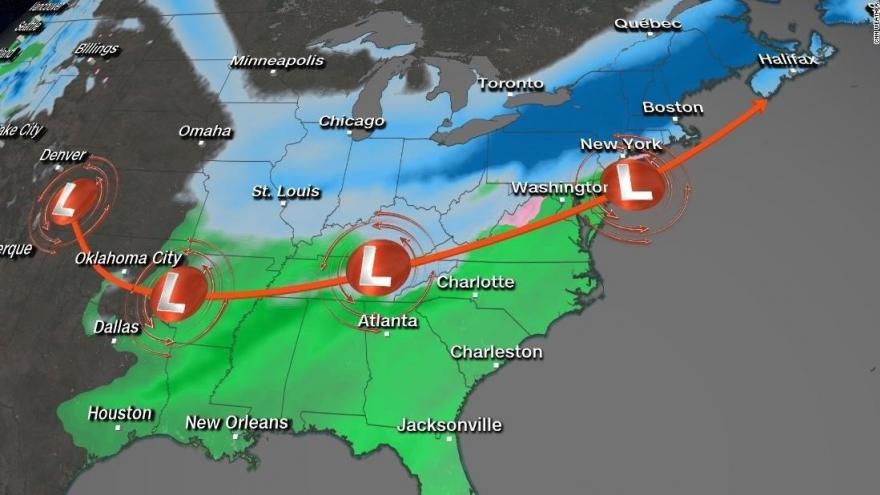 A series of storms moving across the country will bring significant snow to the north and heavy rains to the south Friday and into the weekend. Roughly 100 million people are under some form of a winter storm watch, warning or advisory across the United States.

(CNN) -- The second of a series of storms moving across the country will bring significant snow and ice to the North and heavy rains and severe weather to the South into the weekend.

Roughly 115 million people are under some form of a winter storm watch, warning or advisory across the United States.

Travel through Sunday has already been affected, with nearly 2,000 flights involving domestic airports having been canceled, according to the flight-tracking site FlightAware.com. Airlines are issuing waivers for travelers in the Midwest and Northeast.

None of the 150 passengers and six crew members was injured, the airline said.

The storm system is associated with the same upper-level energy as one on the West Coast that dumped rain in Los Angeles and elsewhere as well as caused blizzard conditions in the Sierra Nevada.

Snow is likely in Kansas City, St. Louis and Chicago

The second storm will exit the Rockies and likely will begin to drop snow late Friday across Kansas.

In Missouri, Kansas City and St. Louis -- which received the brunt of a storm last week-- will get less accumulation this time. However, winds could gust up to 35 mph, causing blowing and drifting snow through Saturday night.

Lake effect snow will enhance the amounts that Milwaukee and Chicago could face through the weekend. Both cities may get more than half a foot of snow if the conditions remain right.

Indiana and Ohio could see rain to the south, snow to the north and ice and snow across the states' centers.

Icing is possible along I-95 corridor in New England

This second storm will be more significant for the Northeast than the first.

As the low tracks farther east, warm air is likely to mix in from the South. At this time, it's uncertain exactly where the line between rain and snow will form.

Forecasters expect a substantial amount of precipitation Saturday evening through Sunday up and down the East Coast. It's unclear on the timing or what type of precipitation is likely in the Northeast.

The latest model forecast indicates snow starting Saturday evening in Boston and New York, which will then turn into a wintry mix and freezing rain overnight into Sunday.

The National Weather Service in New York is forecasting 3 to 6 inches of sleet and snow plus possible ice. New York may warm up enough for rain Sunday morning, but freezing is expected by the evening when temperatures plummet.

New York Gov. Andrew Cuomo said a ban on tractor-trailers and buses on most highways in the state will begin Saturday at 3 p.m. ET.

Boston could get more than 6 inches of snow, with much more to the north and ice to the south.

Those close to the coast could see rain, but a few miles inland it will be a freezing rain mix and then a snow mix a bit farther inland. The snow will start piling up quickly after that.

Winter storm watches are already posted for upstate and inland New England. Heavy snow and sleet will pile up at least 6 to 12 inches deep, with some icing for added misery.

The Interstate 95 corridor through New England seems to be where the bulk of the ice will form, with up to an inch of freezing rain possible in Connecticut, Rhode Island and Massachusetts.

New Jersey Gov. Phil Murphy declared a state of emergency beginning Saturday at noon. He told residents to stay off the roads and prepare for possible power outages.

A flash freeze is likely behind the storm

Behind this second storm, a deep chill will grip much of the eastern half of the United States.

It may warm up enough for rain across the Midwest and Northeast on Sunday but will quickly dip below freezing. It's expected to happen so fast it would instantly freeze any moisture on the ground or surrounding objects.

Highs on Sunday in the Kansas City area -- where the Chiefs will be host to the New England Patriots in the AFC Championship game -- will be in the 20s.

The extreme cold follows the storm and moves into the rest of the Eastern United States on Monday.

"For the most part, this winter the jet stream has traveled horizontally across the US. Sure, there have been some ups and downs, but nothing like what is to come," CNN's Myers said.

"By next week the jet stream will flow from Fairbanks (Alaska) to Texas. So, for example, the following Saturday Anchorage will be 32 and Chicago will be 13."

This arctic air will spill out across the country later next week as far south as Florida, leaving most of the continental United States with below-average temperatures.