Asian Americans demand change after shootings: 'I want people to finally hear us ... not only when we're trending' 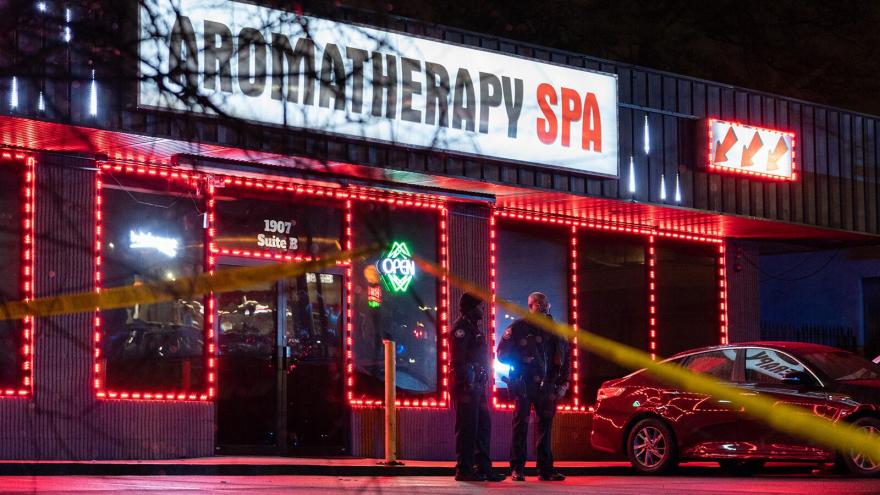 People march during a protest against Asian hate in New York City on Sunday, March 21.

(CNN) -- Anger and grief are giving way to calls for action as Americans of all backgrounds demand justice and change.

Long-simmering fears of violence boiled over for many Asian Americans last week, when eight people were gunned down at Atlanta-area spas -- include six women of Asian descent.

Supporters rallied across the country over the weekend saying attacks and harassment that have surged during the pandemic must stop now.

"I'm Asian, and I'm a woman. And if I don't stand up for myself, then no one else will," said Angela Eunsung Kim, who rallied at New York's Columbus Park on Sunday.

"I want people to finally hear us ... not only when we're trending," she said. "I want to see change in people around me -- my friends, my work, everything -- all the way down from our neighbors, all the way up to lawmakers. That's the kind of change I want to see."

Anti-Asian hate crimes have more than doubled during the pandemic, according to the Center for the Study of Hate and Extremism at California State University, San Bernardino.

But authorities have not said whether the shootings at two massage spas in Atlanta and one in Cherokee County on Tuesday were hate crimes.

Suspect Robert Aaron Long, 21, told police he believed he had a sex addiction and that he saw the spas as "a temptation ... that he wanted to eliminate," Cherokee County sheriff's Capt. Jay Baker said.

He said Long claimed the attacks weren't racially motivated, but the Cherokee County district attorney said the investigation is ongoing.

Long has been charged with four counts of murder in connection with the two spa shootings in Atlanta, according to Atlanta police.

Atlanta police have said it is still too early to know the suspect's motive. Some Atlantans have questioned why, if Long was targeting businesses he saw as a "temptation," he did not target any of the nearby sex-related businesses such as strip clubs in that part of the city.

Long is being held without the chance for bail in Cherokee County, where he faces four counts of murder with malice, one count of attempted murder, one count of aggravated assault and five counts of using a firearm while committing a felony.

He has also been charged with four counts of murder in connection with the two spa shootings in Atlanta, according to Atlanta police.

On Monday, the Cherokee County Sheriff's Office said it will no longer be providing updates on the shooting to preserve the case for prosecution.

"Our main focus is investigating this heinous crime and ensuring all facts and evidence are gathered to present to the District Attorney of the Blue Ridge Judicial Circuit for prosecution," Sheriff Frank Reynolds said in a statement. "In an effort to preserve the case for prosecution, the Cherokee Sheriff's Office will not be making any additional comments about this case at this time."

"We understand there is great interest in this case across the country and around the world. I and the CSO investigators will work directly with the District Attorney and other law enforcement agencies involved to ensure Mr. Long is brought to justice."

'It's an awakening moment for Asian Americans'

In Atlanta, multiple Korean church congregations held a Korean language service outside the Gold Spa in honor of the victims, with some attendees holding signs reading, "Stop Asian hate."

Pastor Byeong Cheol Han of the Korean Central Presbyterian Church stressed this a time to become more involved in social justice on behalf of all communities of color in the United States.

Han said he did not believe the suspect's claim that his alleged sex addiction fueled the attacks. He said that claim "was a very poor excuse. He aimed (at) those very vulnerable. Those who cannot resist."

"It's not just a young man's deviation, or an isolated incident. This is clearly a racially motivated crime," Han added

Those sentiments were echoed across gatherings in other cities this weekend, including Denver, where members of the AAPI community gathered Saturday.

There has been a rise in anti-Asian violence and an increase in vandalism at Asian-owned businesses across the Denver area in the past year, said Clarence Low, a member of the Asian Chamber of Commerce board of directors.

Low said there have been reports of spitting, slurs, and graffiti targeting community members, as well as countless unreported crimes.

"The rhetoric and behavior of our national leaders emboldened and inflamed anti-Asian sentiment," Low said.

He said the US has had policies in place for more than 100 years that target and discriminate against Asian Americans, including the Chinese Exclusion Act of 1882 and Executive Order 9066, which ordered Americans of Japanese descent into internment camps in the 1940s.

Low also cited the 1982 killing of Vincent Chin, a Chinese American who was mistaken as Japanese and beaten to death in Detroit by two White men who blamed Japan for the loss of auto jobs.

Within an hour of the first shooting, four more Asian women were killed at two spas on Piedmont Road in Atlanta: three at the Gold Massage Spa and one at the Aroma Therapy Spa across the street, authorities said. Those victims were identified as Soon Chung Park, 74; Hyun Jung Grant, 51; Suncha Kim, 69; and Yong Ae Yue, 63, according to the Fulton County Medical Examiner's Office.

The families of the victims who have spoken out said they want justice for the senseless deaths of their loved ones.

"This was a massacre. We have a justice system and he'll have to be held accountable," Tan's ex-husband, Michael Webb, said.

He said Tan worked seven days a week to save for retirement. "I'm sad it ended in an instant while she was working, hard," Webb told CNN.

"She kept saying to me, I'm going to be able to retire soon," Webb said.

Webb told CNN that Tan was protective of her employees, sometimes kicking certain men out of the facility.

"She wanted to know where her employees were ... who the customers were, she used to tell me a lot of times she would throw customers out because they would come in and think that they could have sex," Webb explained.

Long's church, Crabapple First Baptist Church, said it has removed him from its membership ranks because it could "no longer affirm that he is truly a regenerate believer in Jesus Christ."

Earlier, the church released a longer statement saying it was "absolutely devastated at this senseless loss of life and callous disregard for human beings created in the image of God."

"We grieve for the victims and their families, and we continue to pray for all of those affected by this heinous crime as they deal with unimaginable pain and sorrow."